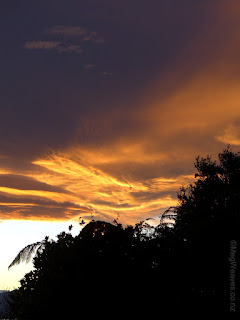 Day 33+10, May 7. Sunset just now was pretty flash; every other Nelsonian is posting pics. We had strong winds all day so the cloud shapes were intricate. The color was more saturated, closer to true orange, but hey, I tried.

Today Jacinda described Alert Level 2, which may or may not start mid next week, and the whole country is giddy. It's not clear if Ben will go back to the office because pre-Level-4 lockdown, during three days of Level 2 (?), "oldies and sickies" were told to work from home by the school. Also, very unnerving, Education Minister is working towards allowing International students to enter New Zealand before the border closure is lifted. Ben works at a tertiary institution which, like most tertiary institutions here, rely on international students' tuition, though he's rarely in direct contact with them. You see our dilemma.

We don't go out, nobody/nothing comes to our house, (the last time we went to the supermarket was April 19, and we can stick it out until after the weekend if we so choose,) so we've been washing hands the right way perhaps twice a day and I haven't disinfected surfaces in weeks. I can't be bothered going back to disinfecting Ben every time he comes home. Because I'm... busy? 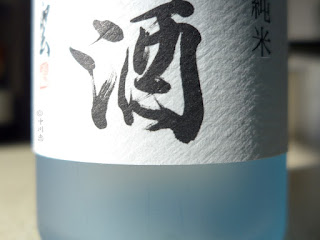 Day 33+11, May 8. (Text and Pic on Day 33+12.) We went back to two supermarkets after 19 days. We'd forgotten our routine so revised before leaving home. Although we arrived at the first at the same time as before, it was completely dark, and everybody else looked relaxed and "normal"; no other shopper had masks nor gloves, many going in for whatever fit in their pockets, or for one bag of potato chips. Traffic between 6 and 7.30 was hectic, everyone presumably picking up takeaways or going to the supermarkets. Many eateries looked empty except for a couple of staff, except McDonald's on Tahuna with a couple of cars and KFC with cars wrapped around the building. Drivers, though, still thought there must be fewer cars; many entering a carpark in the wrong direction without slowing down, (carpark entry/exit directions haven't changed in... 20+ years?); some speeding right through roundabouts.

It'd taken two and a half hours to go to two supermarkets, denude/disinfect groceries, (while still discussing how we did things just a few weeks ago,) and have showers. Exhausted, we ate potato chips, (first bag in 19 days!) and drank sake in silence, before finally getting up to heat up soup we made earlier.

The world/Nelson seems far more ready to resume normal transmission than we. Is that the right way to go now? 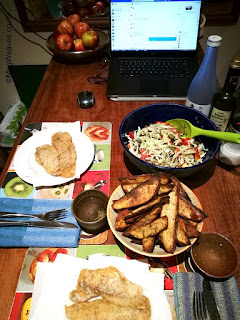 Day 33+12, May 9. "Telly Dinner" with friends. The idea was to get takeaways or have meals delivered, but we were both tired and couldn't be bothered, so Ben made our own fish and chips. One of the best things about having a meal with good friends is to laugh at funny stories together.

(Note the cloth napkins, one of my first weaving projects back in 1995-ish, in Swedish cottolin. The "recipe" called for two sizes of threads and I didn't have the thicker size, so I sleyed the warp crammed/spaced. I thought I was so smart.) 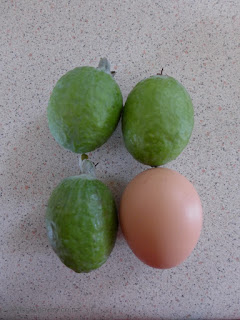 Day 33+13, May 10. First of the descent sized ones, (it's a smallish egg, but,) not hollowed out by birds. But I'm afraid the season for our trees' babies is approaching the end. 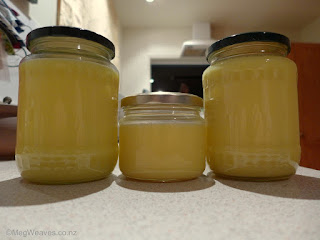 I made more ghee while I remembered how. Or, so I can watch The Globe vids guilt-free. There may be a few more ghee- and caramelized-onion-making while these free videos are available.

Tried to ring Mom three times for Mother's Day, but she's not picking up; she must be enjoying hanging out with her new friends. I wanted to commemorate moving into the family house 50 years ago today, also Mother's Day, but that's OK; birthdays and anniversaries don't mean anything to her these days.

Tomorrow at 4PM, Jacinda will announce if, and when, we are moving to Level 2. There may be changes again. 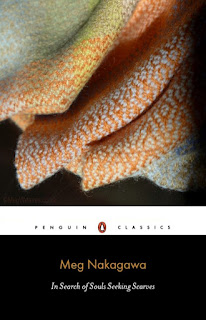 Day 33+14, May 11. Today's pic was generated by Penguin Classics Cover Generator, kindly supplied by who else but Volume​. I was going to play around with several pics but the first one worked so well I haven't tried another.

I've been thinking about "things", how many people need yet another scarf, if I really want to entice folks to covet  another, etc, because I've had around ten sitting on the couch since forever, waiting me to list them online. Besides, the plague has hit some folks hard financially, and some of the "support local" and/or "support the arts" posts have been terribly in-your-face.

We just finished listening to Jacinda describe Level 2, and that we will transition incrementally starting this Thursday. I am conflicted because the rules feel so easily violatable, or so up to individual interpretation as was the start of Level 4. On the other hand, as Nelson seems to be in a good position, there is no use holding back people bursting to go out and mingle and/or resurrect their businesses. And regain normalcy. I have the feeling there were more than a few violating Level 3 rules since the prospect of Level 2 was announced anyway. I'm not sure, but it appears Ben's work is still having staff who can work from home stay home; I hope so, because Ben going out of this house makes the "cleansing" process complicated again. And he's a nice, quiet worker I don't mind having around.

Ben and I met at work and got married and most of the time at least one of us worked. After having left our jobs, the first few weeks in New Zealand we were together 24/7: November 7-ish 1994 to January 3, 1995 to be exact, after which Ben started attending English Language courses in the mornings. By this Thursday when we enter Level 2, we will have been at home for seven weeks, and depending on how long Level 2 lasts, we may renew the record. So, yay?

Except, back in 1994, we were in a new city in a new country and explored eateries and garden centres and used bookshops, or drove in all directions until we hit the sea, and ate fish and chips on the beach. This time, well, you know the ropes; wherever you are you've been doing something similar, I'm sure.

Anyway, some changes are afoot. 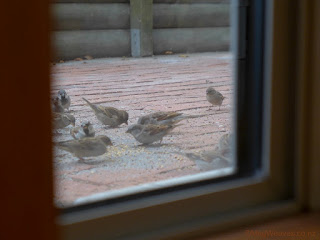 Day 33+15, May 12. First we had Scoby. Then Doughy. But we've had these guys for 4-5 years. The one looking this way stood in the middle and chased away everybody for minutes, until a tiny female came and shooed him away. YES! I normally spread the seeds wider apart but today it's concentrated for their photo shoot. We get between half a dozen/10 to some days close to three dozen and then it gets a little weird. Occasionally we get a type of wren of the same size, very pretty, but most days only sparrows.

The best part is, if we forget to feed them for a day or a month, they don't die. At least not collectively. 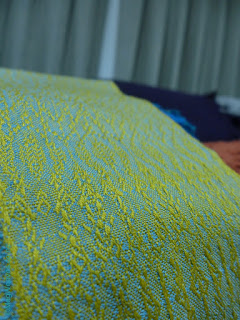 I pulled out this old piece because I needed a pic of old-looking textiles for a possible art project. Boy, I do like my gold scarves. For years I've been thinking of weaving these designs/colors in wider pieces but haven't, because folks call this "yellow" and yellow is hard to sell. But simultaneous contrast with blues, teals and greens are fabulous, intriguing, and exiting. Maybe soon. Also did some closet cleaning, wool washing, and seed collecting. So, it wasn't nothing.

Tomorrow is the last day of Level 3, but Ben will be working from home under Level 2. As we were.

This photo attracted a few reactions on Facebook. I appreciate that, because I really liked making them, always thought they were kind of unique, and still love the look of them. (Because of the contrast between floats and the plain weave, which there is a lot of, the texture isn't ideal, though. ) I sincerely, always, always intended to weave more. I still insist this look more gold, but I also realize now how much I'm influenced by my own idea of what sells these days. I also remembered three of these got stolen from three exhibitions in Nelson, and a version got rejected from the National Guild exhibition because it contained "too many errors," though nobody could be bothered to tell me what they were when I inquired. Usually I feel I haven't been in this game long, but in some ways, I have. 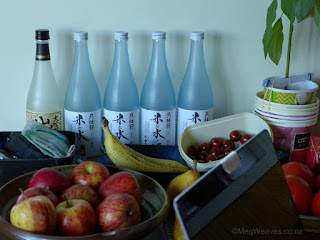 Day 33+16, May 13. (Text and pic on Day 33+16+1). End of Week 7, last day of Level 3; for all intents and purposes, life in New Zealand will be almost back to normal after midnight; there have been back-to-normal traffic noise in the mornings and airport noise overnight; schools resume next Monday; even bars will reopen in a week. I might have been slightly cranky and somewhat pensive tonight, but I've been furious since I read in a Facebook info page: "Purchasing Power is People Power." It is of course to support local businesses, but hell, have we learned nothing? And what about the folks who lost jobs? Enough!

(From memory we only drank two bottles of sake in seven weeks, and opened a third, now in the fridge. We'd been saving these, because before lockdown I became interested in making ginger wine at home. Gotta keep up with my kitchen mania.)