In Search of Good Ideas

I've been thinking about designing/not-designing for over a month but my focus keeps morphing/moving/disappearing I better jot down what I can remember at this point. 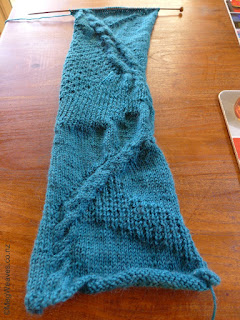 Some days joy-knitting goes fast and without worry; then several days in a row I just stare/glare and see no solution. Some days I don't want to do anything else but knit, while on others I want to unravell the whole lot. When the going is good, though, it's not just enjoyable as something to do, but the process of thinking-but-not-thinking intriguing. In fact, thinking/counting produces less attractive solutions, while following mostly what (I think) I see has produced most attractive results. And I feel lucky to have stumbled upon those options.

In contrast to what I've read/studied about designs, the thrill of this kind of process is most urgently felt when I've gone against rules, or in spite of them. As in, when a random curve is more attractive than a well-calculated alternative. Of course it doesn't happen this way all the time; in fact there are plenty more patches of bad ideas, but when something does work, I enjoy being surprised. And of course knitting is easier to undo than weaving, so if something really doesn't work, hey, presto!

I wonder how to approach designing, weaving in particular, so as to invite these surprises, but not resorting to a hit-or-miss approach. Weavers tend to plan (everything) ahead of time; this is the nature of our craft. But if we can slip in the unplanning/unthinking element in our... plan? The making would be so much fun.

Joy-knitting has been a positive experience, including the bad days, but the overall look? Ummm... ex-peri-mental. This particular scarf, if it becomes an unusable Plague Project, I'm OK with it. 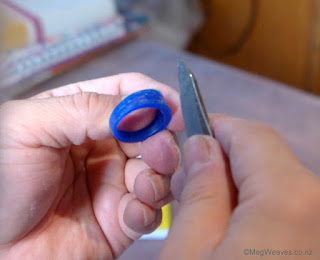 In May, we signed up for a correspondence course in lost wax technique of jewellery making. In a way it's not as hard as it sounds; we carve wax, Tom casts the metal, and we polish and wear them. On the other hand, it's 3D, and what I think of as "reductive" making, (we're removing the unwanted bits,) rather than building up, and it baffles me how some folks can see things that way. And I'm unfamiliar with the material and tools.

I wanted to hold on to my new way of designing/undersigning and had my mind set on making something abstract. (Also, I'd be less disappointed that way if my piece doesn't turn out to look the way I had intended.) So while Ben just started carving, I spent many hours looking up images of Bronze Age jewelry, (because bronze is one of our metal choices,) fish and dog sculptures, (I like their shapes,) Minoan drinking cups, (I like pictures and objects based on everyday objects,) and sculptures of masks, (I've always liked faces and masks though I never looked into why.) I thought to doodle a few in a sketchbook and got thoroughly distracted. 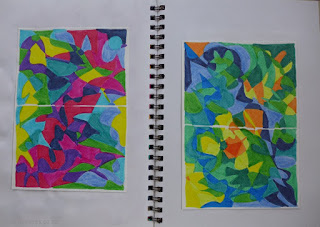 At first I couldn't find the right sketchbook, then I found some interested stuff I've done in the past. I fell in the rabbit hole of trying to mark the dates use on the sketchbooks, which took a heck of a long time because I only date some pages by month and date but never years. Also I go months and sometimes years without using sketchbooks so I had to check this blog and try to remember when I took which classes and travelled where, etc. 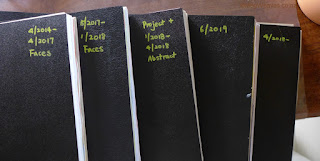