I guess it's back to normal transmission today. After yesterday's post, I've able to see my direction more clearly, so I made decisions which had been staring at me but which I was reluctant to make.
Second of the three warps on The List: remember the teal piece? I've been weaving little at a time in spite of icky tension. Early in November I remembered why I never used this merino/mohair mix in the warp after trying once, on a table loom: it is so terribly brittle and breakable! Still, I persisted and finished the third weft repeat yesterday, but who am I kidding? Even if I can be bothered fixing broken warps, the resultant cloth could be really wonky.
So I cut it off. I'll mend and wash for some future use. I must now decide whether to take the warp off completely, or unwind/rewind around 2m at a time and weave 150cm scarves; there is enough for two scarves. It worked for the first part of this piece, but I didn't unwind far enough. It'll still be a fragile warp. Very pretty, though. 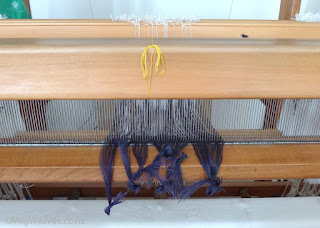 Third of the three warps on The List: remember the achromatic clasped weft piece? Even two years ago I was complaining it was hard on the body, the back and the eyes. It's a particularly nice warp; I don't have any more of the palest gray, and this was supposed to be a superb piece, so again, I covered it with a cloth and waited for my mojo to return. But as I said yesterday, if I were to do something like this with cashmere, the Ashford table loom would suit better. So off it came, too; I'll wash that tiny piece for another use.
I started weaving with 26/4 100% cashmere weft in the same pattern. I haven't woven a lot in these sensible, sedate combinations of late, but it'll be attractive as a garment, and will weave up super quickly. Just before dinner last night I wove 53cm. There is enough for two scarves if my calculations are right. 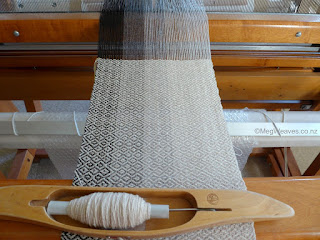 And here's a fourth of the three warps on The List, on the Ashford. You had a glimpse yesterday. Some years ago I made a symmetrically striped cashmere warp. It was getting late and I ran out of one color so I used what looked like salmon pink in twilight. In daylight the following day, it was very pink and under the couch it went. When I came home from Japan last year, I edited the colors, (I removed the pink but can't remember how I restored symmetry,) and wound it on the Ashford. It'll most likely be a twill of some kind, but I haven't progressed further, so it didn't make it onto the list. There's enough for three good-sized scarves. 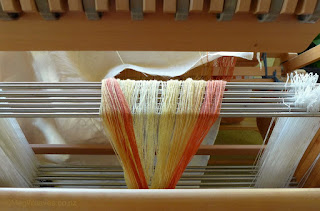 And just so you don't think I've moved on from the last cotton piece already, I got out my collection of Japanese sewing silk, plus what I salvaged from Mom's sewing box, plus a good number of synthetic sewing machine embroidery threads I don't remember buying. :-D I'm thinking of possibly combining these with the cotton I have. 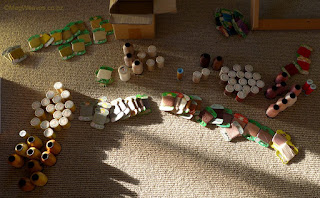