I trimmed/washed/pressed/dried the cashmere pieces. 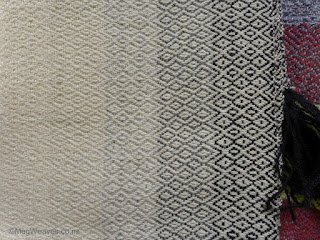 The "natural" 4-ply piece is long and heavier than usual, but nice in a garment-y, easier-to-match fashion. (Cough.) It's long so you can fold in half and put the fluffy end through the loop, even if you're on the tall side. 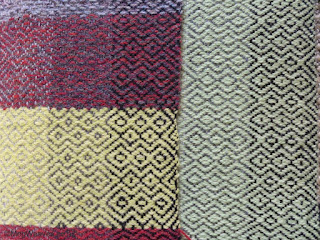 The green piece came out surprisingly not soft compared to the yellow sample of the same constituent fibers, 100%+cash/silk. Perhaps it's worth washing once more, at least a hot vinegar bath. The color changes in different environment, and I like it best under artificial lights, but Ben, who likes greens, likes it throughout the day.
Above the yellow sample is the where I tried the tweedy look, with variegated dark red and a strange variegated charcoal. It has a nostalgic coat-fabric appeal, and I would have gone with that had I more of the charcoal. 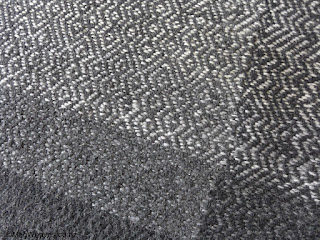 And the warp end, erratically-treadled piece is, well, what it is. Soft overall, except this lovely mid-gray patch, prompting me to wonder if that yarn was some strange cashmere mix which Mom bought because, well, she bought everything. It's a shorter piece, but had I woven with a proper weft, it would have been a proper, (possibly sellable,) piece.
You might have picked up I am underwhelmed. It's been a few days of heavy mia culpa for bad/no record keeping and rushing to finish a fabulous warp poorly for the sake of finishing a warp. In recent years, at least in my head, I've switched my intentions (?) from showy look to more "standard" garment-y look. It's in part because I thought they would sell more easily, but also because I admire other weavers' pieces reminiscent of 1950s-70s coat fabric in Mom and my aunts' closets. Well, this style by me don't sell, and I don't enjoy weaving them as much as the more flamboyant stuff. With the sudden appearance of arthritis, the idea of not knowing how much longer I can weave became real; I don't want to waste my time, energy, and most of all, mojo. (It doesn't mean every warp will be a project-style endevour, but I want to make every piece something that makes my heart sing. Even the stash busters.)
On Boxing Day I had an interesting talk with Bookbinder Rosie. We've been in our respective crafts for roughly the same length, and find ourselves in that place where we know a few things, our strengths/weaknesses, what we'd like to try, and maybe not try new things on a commission piece. And to be discriminating when we receive advice from gurus, and reject if it feels too counterintuitive. We have developped enough intuition in our crafts; just not enough trust/confidence in ourselves.
In a strange twist, our talk buoyed me, so I'm going to stick with the purple variegated warp for a wee while longer. I'll unwind/rewind it about 3 meters and see if I can weave a shortish piece. Or I'll do the whole lot and measure at the same time.
Because I like it.
And if it works it'll be fabulous. But it I find it too onerous, we know I'll just rip it off and put on a fabulous new warp. I can't tell you if I'm just being contrary, or have some intuition on how to make it work, but you know I'll report back. And because the warp is on the big loom, we won't have to wait another ten years and two weeks.
Of the items on the Good Intentions List from late November, I finished two of the first set of three; haven't touched the second, third and fourth sets of threes; slowed down but have managed letters to Mom, at least one a week; and have piled more stuff in the stash room with no intention of cleaning it just yet. I'm not worried about lists, either this one, or coming up with Looking Back on 2020 one, (except the one most stark item: the Australian bush fires,) or Looking Forward to 2021 one, (nada.)
We are having a particularly lazy summer break for two lazy folks who have always had lazy summer breaks. One reason is this: as long as we've been married, Ben's gone to bed late, slept few hours, jumped out of bed at the crack of dawn on weekends and holidays, and caught up with a nap usually on Saturday afternoons. This summer, though, he is sound asleep until much, much later and even goes to bed earlier than me. He's in IT and throughout the lockdowns he worked from home, which sounds easy, but behind the scenes IT folks around the world worked hard with sudden, surprise announcements and deadlines; many worked around the clock because users are online around the clock, some cancelled planned annual leave due to increased workload. Ben's been in IT for almost 40 years so these demands are part for the course, but I wonder if the extra erratic year is taking a toll on a guy that's, you know, not getting any younger. So I let him sleep in, and I usually read.
Naughty me, I didn't think of IT as essential workers, until Duluth artist Carolyn Sue Olson's Essential Worker series #63, found almost at the bottom. (And Ben might remind you he was born in 1963.)
We had planned to do a few projects with our outdoor furniture and deck, not only to make them more pleasing to the eye but so they last longer, and to that end we injected big investment in paint/oil during the October sale. I had also hoped to clean the patio so we can stack the firewood, clear the end of the driveway, get a skip, have them takeaway the vines and bulbs we stuffed in wool bags over the last year, and start anew. The repeating cycle of rain and sun, usually within the same day, have covered our grounds in convolvulous vines. Again. But we've done very little, and today being the day before the halfway point of Ben's holiday, usually I would be in a grand panic, but I'm not. We'll get around to doing some.
We cook a bit but not as much as I imagined, eat OK, I do minimum housework, we stay home not because of any Plague-related regulations, (we currently have virtually none inside NZ,) talk a bit. Ben's getting into carving wax to have Tom cast into metal, and he's now thinking of wood carving, something he did in the past. I'm into weaving.
And that is where we're at on the eve of New Years Eve 2020. If I don't show up tomorrow, then we shall meet again on the other side. And may 2021 be joyous, rewarding, and beautiful.