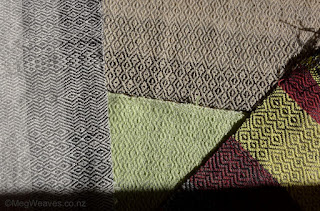 Obscurity: After the natural 26/4 weft piece early last week, after sampling more tweedy looks, I wove one with two minty green 26/2 combined to make 26/4 as weft for quick weaving. I prefer yellow but I've been told too often, "I would never wear yellow," so... (This combo, though, has a slightly car-sick complexion.) With still some more warp left, I used achromatic thrums and left-on-bobbin bits to weave a randomly-treadled piece for me or family. I expected to get a short fabric or enough for a cowl at best, but I got a short scarf; had I known, I would have woven a proper scarf with pale blue wefts. I rushed to get this warp finished, and regret wasting a really lovely warp. Still, another old warp off the loom. 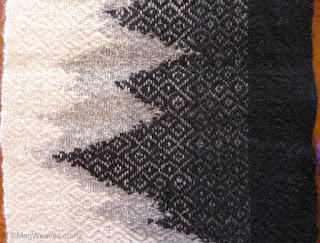 Clarity: Abandoning the clasped wefts was the right decision. After washing the wee piece, I remembered the last time I tried, pointed threading/treadling pose problems. Weaving with clasped wefts, sometimes I had to choose between showing clearly the weave pattern or the shapes/lines created by the different colors.
I wonder if the same problem exists with what I call the lazy clasped weft, where one weft enters the shed from the right selvedge, another from the left, they clasp somewhere in the shed and return to their original selvedges. Each weft travels round trip, two picks in a shed, so the lines/shapes won't be as sharp, but it's worth considering/experimenting in combination with point threading/treadling. 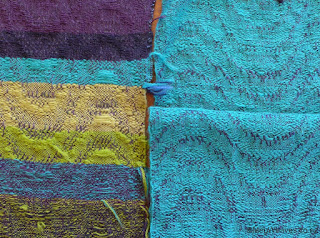 Obscurity: The last remaining of the three unfinished warp is the brittle purple variegated mohair/merino warp. Intellectually it is a no brainer to take it off the loom. The more I wove on the delicate warp, the more erratic my beat became and as you can see top right I packed it in so much in comparison to the samples on the left or the start of the piece on bottom right. It's unattractively weft-dominant. But I got some nice samples from this warp and every other day I feel I must persist. The other every other day, I get giddy thinking about a number of warps that can go on the big loom if only I abandon this one. 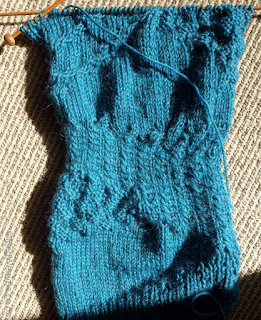 Clarity: I had a ten-week gap in my joy-knitting. I wasn't sure why I was still doing this, because it's ugly and stiff in parts, but it's good as a sampler, so I'm sticking with it. I'm leaving ends sticking out, etc, so when it's done its work, I'll unravel and knit something else with the yarn.
Clarity: I'm learning more about arthritis. Holding tightly/pulling/exertion aggravates it. After taking turmeric capsules and drinking turmeric and cinnamon concoctions for a fortnight, I was still afraid of weeding, but felt most chores around the house would be OK. Weaving was fine, as was cooking, ironing, cleaning, until I made the mistake of squeezing tiny limes from the garden by hand; my right hand lit up like Christmas tree and throbbed for a day and a half. I have been having increased difficulty opening glass jars, though, even when the hands aren't hurting.
Good/bad food for arthritis overlap with those for diabetes, so there hasn't been a big change in our diet in theory; in practice we're cutting out a whole lot of carbo/sugar that crept back in the last couple of years. Unlike weight-control or diabetes, though, arthritis hurts, so it's easy to skip naughty foods. And with so much weird "teas" every day, I even got used to turmeric; it no longer suck my will to live. :-D