This is the new piece alongside the three false starts. It is straighter and the edges better than they look. I haven't pressed them because I wanted to see them "without makeup", as it were, and I cut off  tails when dry. And I'm surprisingly pleased with it. These are my thoughts:

* I wished I had more weft colors. I have an in-your-face pink, an orange-yellow, and three oranges; also a few achromatics, the lightest of which I plan to use with the lightest warp. And a bright red which I can use, if I have any leftovers after the upcoming big red piece. A couple of saturated blues, a purple, and a teal or a green would have been nice to "juj" up the picture but I'm not buying for now as I still have plenty, just not in 20/2. (By the way, have you ever googled "Juj something up" to check the spelling? Mindboggling.)

* I am right in thinking a foot loom is best for this technique so I don't have to think about the pattern/treadling as much as when weaving on handlooms. I have two foot looms, a 16-shafter, which is too hard on cashmere warps, and this 4-shaft Jack, on which I weave standing up. This has nothing to do with the height of the bench, but the shortness of me, especially the legs, and the desire to press the pedals from above and not in an angle, and to observe the fell from above and not from an angle. Over the years weavers have suggested gazillion things that does not apply to me, short of, (see what I did there?) cutting the vertical elements of the loom and lowering the entire mechanism, which destabilizes the loom unless done expertly, and I'm not willing to going there. I'm short.

The problem in this case is I like to get very close "down" and personal when I clasp the wefts, for the right tension and the position, and so I bent down every other pick, which slowed down the weaving and made me queasy every time I had to look for the other sweet spot on my glasses when I resurfaced. One possibility is to switch to a more complicated threading and easy lifting on the 8-shaft table loom and weave on the kitchen table, but I'm not crazy about the very short distance between the shafts and the front beam, and Klick's shed is too small for this sort of carry-on. Another, from a different perspective, is to use merino warp with cashmere weft on the 16-shaft. 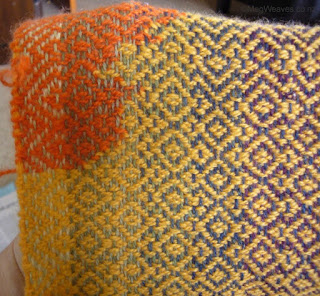 * This warp was threaded in a pointed threading and woven in 2:2 twill, meaning, with the clasped weft there was going to be more than a few places where the pattern would be disrupted in the interest of clasping/holding. I saw this anomaly after I started the first false start and brought it up with Pat, and I decided to just go ahead. I tried to correct them by forcing the shuttles acrobatic moves, but in some cases, from memory, I found no fix. This is Issue One for further observation/investigation.

* I noticed sometimes the clasps came with a half loop created by the left weft. As I got used to the mechanism of clasping, I made a rule I'll weave the right weft first, then the middle if any, and the left one last, which seemed to have reduced the occurrences of these loops, but I couldn't eliminate them, sometimes even when I tugged on the weft while the shed was still open. I' not sure if I understand the problem correctly. This is Issue Two. 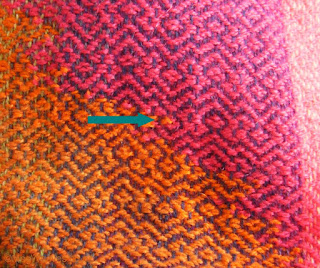 (I know I had this problem but after a wash, I can't see it except some clasps are looser than others. But I did find a naughty full loop and I hope I eliminated most of the.)

* I beat the heck out in the three false starts but this was remedied in the completed piece, or Start Four. The bleach bottle-weighted left selvedge is no worse than the right. The cloth in the finished piece, which worried me while weaving, is like any cashmere piece I've woven, and 16EPI worked fine, as will 15 or 18. I mixed two threadlings in one piece, which was fun.

Now for the important part:

* Using three colors in one shot may make the cloth look interesting, but not necessarily; it depends on the width of the piece in the first place, and the length of the piece and shapes in the second. In narrow pieces like this first one, it may not be as effective, or even overly fussy, especially when the piece is worn. In wider pieces the effort may be worth more.

* For expediency and the integrity of the cloth, I chose to weave the first piece with large patches of one color. And as a whole, I think it looks interesting enough, ergo being surprisingly pleased. I try to imagine a whole piece with more frequent color changes, (thank goodness I have samples of three false starts - those and the inbetween bits make up roughly one-third of a full piece in length,) and I can't see one look being better than the other, just different. I have the choice of learning the mechanism first, or focusing on the shapes/colors, but another one of these warps won't go on the loom until December so plenty of time.

* If a color appears/disappears anywhere but from either selvedge, the tail of the weft needs to be sewn in, and I felt uneasy doing this; the bottom sample in the top pic has rusty orange between the yellow and pink. The washed/dried cloth is soft and thinnish, and I can tell where the weft is doubled. I'll stick to introducing colors from the selvedge, but should a tail need sewing in, I'll do it most definitely on the loom, as it emerges.

* All in all, drawing/doodling shapes, and then possibly a template, may prevent future regrets. Although, y'know, it could preclude surprises, too.

Coming up this week: finish weaving the blue baby blanket; thread and sample, at the very least, the red warp; and for goodness sake, weed and put down at least the remaining too-big-for-seed-raising-mix hellebore babies. And help Mom upgrade Skype by phone if at all possible.
Posted by Meg at 9/17/2017 03:00:00 PM