Previous post was supposed to be the last of the recent consecutive streak, but there are plenty of deliciousness left I want to share.

Well, this is not delicious, but three makers told me Thursday night of their arthritis, or similar. inflictions interfering with their making; a couple are much younger than me. For me it's been lower limbs and stamina, but let's all be careful, OK? (Even though I have no idea how to be careful about arthritis.)

I had to catch the 5.12 bus to get into town in time to pick up a Richard Ford volume at Volume before they closed at 6, then cross the street to Nicola's Cantina. Because it was Esther's birthday, I wanted to make an effort to dress up, so I donned a black top, black pants, and black shoes so I can put on my step-grandmother's Japanese silk jacket. Came 4.45 and I started my journey; I should reach the bus stop 5.05ish.

Walking up our driveway was fine, but soon afterwards I noticed there was a leaf stuck on my left shoe, so I stepped on it with my right and kept going. It felt my shoes picking up a lot of pebbles, then I saw a twig with three leaves stuck on my left shoe, again, so I peeled that off. I checked my soles for sticky stuff, but there were no gum or dog poo. My shoes felt increasingly awkward with every step, but never mind.

As I crossed Tahunanui Drive, I thought the shoes were going to be OK and plodded along the elementary school, when suddenly, but in retrospect unsurprisingly, my right sole exploded. I don't mean disintegrated, not peeling off the rest of the shoe like another pair a year ago, but it exploded, into narrow strips of black... bits.

I dragged my feet another 10 meters, turning into Rawhiti St, and wondered what to do. The bus stop was closer than my house; I could get into town and ask Ben to pick up a pair of shoes before coming to Nicola's; I could remain barefeet the rest of the evening, not unheard of in Nelson but I never do that, or ring Ben and ask to be picked up, taken home, then taken into town. It was 5.10 and earlier than when Ben usually leaves work, I rang him; he wanted to meet at home but there was no way I could make it, so I stood in the grass, not the sidewalk, for 25 minutes, kids and parents staring at me while they came and went to the basketball court.

Ben drove up laughing, wanted to see my shoes there and then, (I wasn't laughing at all, so no go, mate,) we went home, picked up my navy blue shoes, got to Volume at 5.50, got the book, went to Nicola's, and I ordered a pitcher of red sangria for myself, and Ben a margarita. And the rest of the evening was exquisite. 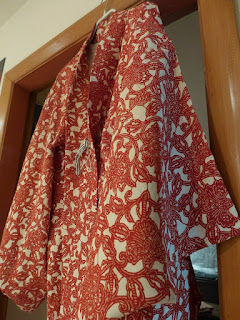 Said red jacket, which I couldn't put on until we left Nicola's because it was too hot. And I had merino socks in the same red, not that anyone got to see.

Rosie and I powwowed what Stella said about practical considerations in making. Rosie is a bookbinder, and we share difficulties in breaking out of the technical/utilitarian considerations/constraints of our own crafts, so we explored each other's. Rosie proposed we look into the opposite of what our end products usually do, and she chose "telling a story" as the primary function of her books, while I chose the woven cloth's ability to wrap a body, and being pretty. I hope we get a chance to continue this thread.

Everybody at the birthday party love books and, well, tend to buy a lot. Among other things, I said I have a few "current issues" paperbacks which were current when I bought them, got started, but couldn't be bothered finishing. Richard reminded me they now have historical values. He is such a gem.

In the last two nights, I also found out one of friends' kids are finishing university this year, another starting in Feb, two starting their last year at home; one started his first part time job last night, and one I knew as a sweet little boy is now twice as tall as me, (OK, maybe not that tall,) and half my weight. He still had the sweet face, but no wonder the rest of us are getting old. I loved that I was not the only one taking off the glasses to read the menu.

Today we delivered some hellebore babies to Stella and Thomas. I love the idea my kids are going to flourish at Esther's, Maria's and Stella's in the slightly distant future. (Hellebores are so slow and somewhat unexpected.) We ran into Barbara at the supermarket.

Normally two consecutive nights of socializing would start an exhausting regurgitate-a-thon interspersed by variations of, "I should not have said that." It's not that this weekend is an exception, but this is part of living with depression; when the going is good, I try to make the most of life outside my head/house. It may appear almost bipolar from the outside, (I'm not as far as the last psychologist could determine, just mildly/moderately depressed and acutely anxious,) with a barrage of appreciative vibes. I try to curb my enthusiasm without much success, but good people are the best gifts in life, no?

And I love my husband, including the part where he wanted to see the soles right away. But seriously; what was he thinking, when I was struggling just to climb into the car!
Posted by Meg at 9/30/2017 09:54:00 PM