This winter, Ben and I have had a couple of stints of knock-down-drag-out cold. And what's with the cheer in my voice, you ask? This is the kind of cold I know, the kind I had once a year most of my adult life, where there is no doubt I'm sick, not being lazy. I used to see my week of cold as an annual regrouping, and almost looked forward to it. Nothing like the icky underlying-ongoing-unreasonably-tireness.

A couple of times I went a-weeding to make imperceptible progress, too. I try not to feel overwhelmed or discouraged by the magnitude of the task; I am plenty ashamed of not having worked harder and more over the cooler season. Still, it's nice to put things into the ground and watch them perk up in the rain.

Pat helped me with the tapestry technique just before she went to the US; she was to come see me when she got back, and I was going to work like a machine to finish two warps, (six to eight pieces,) if not all three warps in that time. Pfffftttttt. I haven't finished even one piece, and she's been back a fortnight. But I finished the gray piece, and started a second, blue piece. The draft is similar but different. 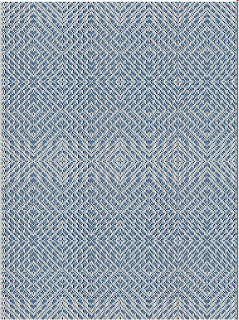 The cashmere. I started for the fourth time. Although the colors and shapes are the main focus, I wasn't happy with the weaving, the cloth, so I decided to make the color areas bigger in this first piece. The treadling is the simplified 4-3-2-1-4-3-2-1-2-3-4-1-2-3, but I might mix it up a little. Or not. 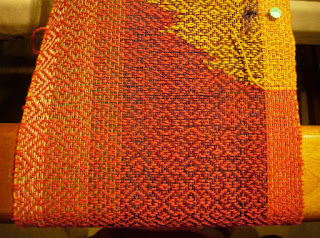 Sorry about the bad colors and the wonky tension; it was late andd I took off the bleach bottle at the back weighting the left end. The right selvedge is crap; curiously, when I was using the trickier treadling and weaving slowly, selvedge was better.

Recently a thought came to me while weeding. One of the things I find visually pleasing is a row or grid of similar but unidentical things, like the pebbles I did a while back. This was the original doodle. 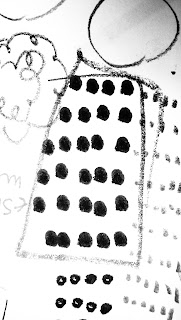 I've always been attracted to photographs of, say, five or seven hand-thrown teacups in a row, and how sad cup/s looked at home in comparison. I always put it down to something like the psychology of advertising or doubting I've selected the "right" cup/s, but only recently realized it's more about visual pleasure than greed. And how much less I'm interested in a row of identical items/motifs.

The grid drawing I've been doing for a year for mix media swap journals is another; to me these are the same as collections of motifs. I'm quite enamored by my grids, so I'll post a few, some of which you have seen before. 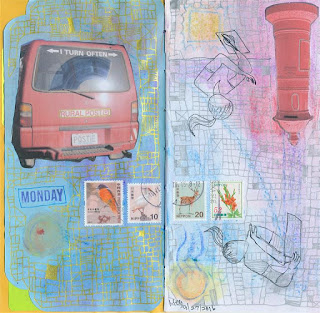 From September last year and  two of the first; I wanted something that look like maps or aerial urban shots; I had in mind post-war Japanese shanty towns. 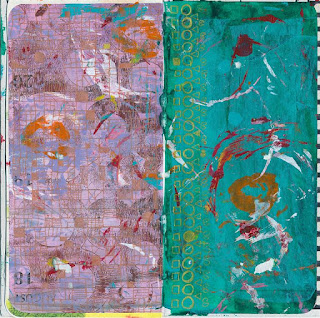 In early October, hard to see, but I draw on top of all kinds of backgrounds, and the focus was for the grid to appear in and out of the backgrounds. I used metallic gel pens so depending on the angle I could always see my grid clearly. 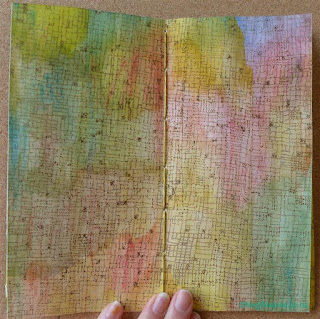 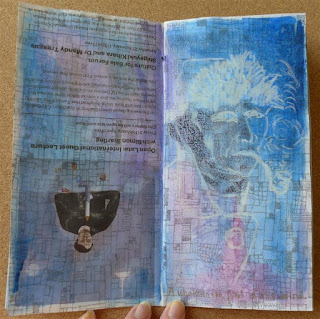 By late October I was trying different size pens for different size grids. These are not drawn on the pages, but drawn elsewhere, scanned, printed onto transparent plastic, and rubbed on. 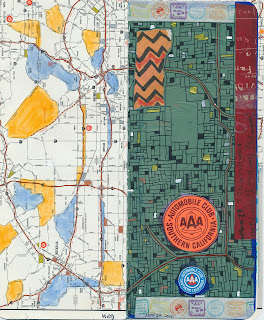 In November, I focused on extending a map. 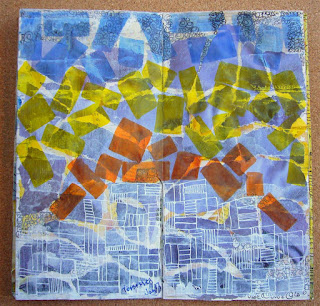 In late January; I started out drawing my usual map but it/they morphed into building/s, making me think of the SIS building to be specific. This was the first time I saw my grid vertically, leading me to think of cityscapes and flat maps simultaneously. 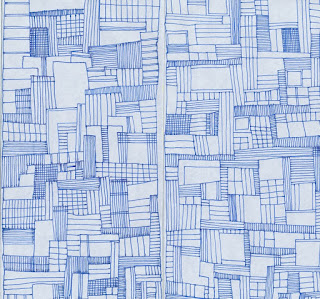 I've done numerous grids since but this last weekend I most definitely had cityscapes in mind for these envelopes. And the closer the buildings to me, (bottom of the envelopes, which got cut off in the scanning but you get the gist,) the smaller and more crowded. 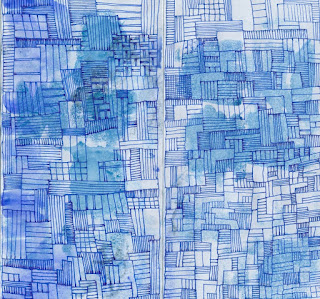 Backgrounds, (watercolor monoprint blotches for these,) enhanced the feel of cityscape; more generally they give another element/dimension, in some instances distractions, in others a focus. I did the right one first and you can see me undecided whether this is going to be a map or a cityscape whereas in the left there is no hesitation. I even left a wee gap at the top. 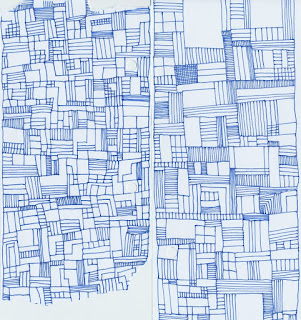 Our coffee table is made of recycled wood which is not only not at all flat but has gaping holes. (Ergo visitors are asked to use coasters not to protect the surface but to prevent their cups/glasses toppling. Seriously!) At first crooked lines bothered me greatly but they give a different flavour to the more regimented look. Slanted horizontal lines in particular give the feel a building stands at an angle to others.

I draw grids, them sometimes cut/tear to use in collages, and even draw grids, waves, and other things on top of the collages in same and different colors/mediums. I'm playing with these for three reasons: first is I love drawing these in the evenings while the telly is on, or off, to unwind and concentrate simultaneously; secondly, I wonder if this is one way to reconcile my more predictable, plan/sample/weave work mode with a more relaxed/thrilling-but-hit-or-miss mode, combining meticulous drafting with hand-manipulated techniques, (which is most definitely easier said than done, I know); the third is I'd like to develop these so I can draw more refined/considered versions to make something I want to frame and hang on my wall, or as a 3D "architectural" model. (To me they are close enough to architectural drawings I've always liked, with Outsider/Naive/Deconstructionist/Abstract flavour, to make them unique and hide technical shortcomings.)

Email ThisBlogThis!Share to TwitterShare to FacebookShare to Pinterest
Labels: Clasped Weft, Mental Health Postcards and Other Ploys on Paper