My Dad would have been 90 today. I'm not sure what he'd make of this new world; angrier than 2000 or hysterically laughing after running out of options. I'm pretty sure we would have been in frequent contact, my being his political offspring, trying to outdo each other name-calling politicians; neither of us were/are satisfied by boring ones, although I've logn run out of creativity this time around. 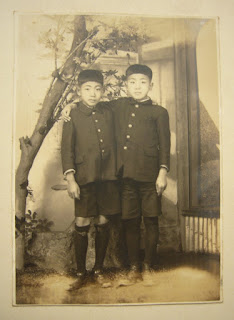 That's him on the right and his younger brother, who predeceased Dad by a couple of years; they were the last of their nuclear family by 40-plus years, having lost two elder siblings as kids, then their father when Dad was 33 and their mother when Dad was 43. So, well done, Dad, for sticking around until I was 55. This would have been taken probably some time in the 1930's/40's, before The War.

When we were cleaning up the house after Dad died, Mom commented Dad's family had astonishing amounts of studio-shot photographs, not just from this generation but from the grandparents' generation, when "these things weren't cheap." I don't know if her family had photos and lost them in in the fires in the war, or if Grandpa was too busy to think of it. My cousins, (Mom's big brother's girls,) who lived next door to us also had studio photos taken at least once a year that I knew of, which I envied because they looked so posh, but turned out to be irreplaceable gifts because they lost both parents ridiculously young.

Tonight I have Stella's talk to go to, "No time for Art! (Or how to make jewelry in another dimension)"; Dad would have loved the idea, "at your ripe old of age of 59.5-minus-five-days," (and he would have said exactly that; I get my penchant for details from him,) I still think there is wonder to be had in life. 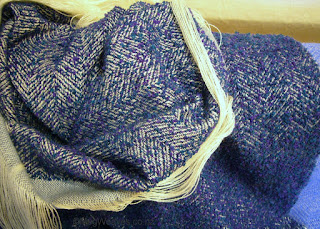 The cushion cover is done and the whole warp off the loom, and the client still wants the two blankets, so that's a relief. A tube, without floating selvedges, wove quickly. And pretty big, at 45cm long. I had a tad more warp left, but I thought just the dark weft was nicer than a bit of lighter coming out of nowhere at the end. The only thing is, I wanted the outside of the cushion, (inside of the tube as I wove,) to have more weft (blue) showing, and checked and double-checked the 1/2/2/3 twill but failed. The start of the piece has single-layer plain weave, which was meant to go inside as a seam (?) and the other end, tubular plain weave. So, errrr... Hum.

Stat Counter reminded me blogs can be, and this one is occasionally, read machine-translated. And while I don't give a lot of credence to machine translators, having been a human version in previous lives, there are measures writers can take to make the machine-translated text "readable". As in not using so much colloquialism. But then it takes away the character of the writer and the flavor of blogs, and while I know sometimes I overdo it, I also like it here because Unravelling is more about a record of how I spend my life. Rather than respectable weaving.