Insomnia, ugh. In terms of sleep, I had the most regular and satisfying sleep pattern since I became a teenager (!!) during the year I didn't weave. Why is that? Life returning towards normal has applied to sleep pattern, too, unfortunately, although in the last month I was able to finalize/select two drafts that troubled me during the day. I'm also getting used to projects progressing slowly, living on Weavers' Time.

I've had a few things on my mind since the last post, most of which I can tell you in this post; the last one, the "tapestry technique" experiment, will be in the next because I need good pics, clarifying thoughts, and it would help if the piece dries before I photograph it. 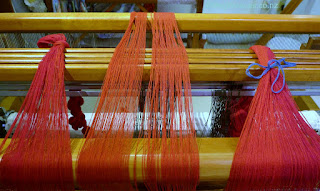 The red warp. It's a red warp and we all know what that means in digital pics, so I tampered with the this one enough to make the different stripes of the color progression show up better. I decided on the wobbly squares in the previous post because I thought it'd suit the color progression better and it was a cinch to modify to match the number of warp ends.  From memory, the weft is in the red you see in the half-width stripes at both selvedges. Yes, both edges are in the same red.

I received Tess' book in the somewhat-entangled (it's really knot; see what I did there?) LJ swap, and it's so beautiful I've been must marvelling at it's simple beauty and so far hesitated to work on it. Here are some pics. Actually I might scan every page before I work on it as every spread is sublime. 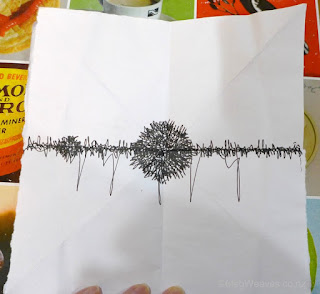 In this I see either a floating city in the sky or an EKG of a beautiful mind. 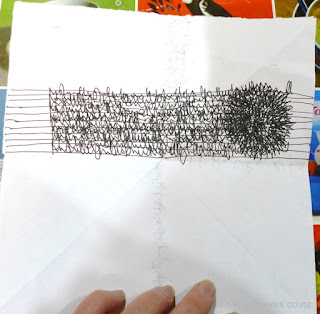 In this I see a musical score culminating in a dozen or more symbals at the end. 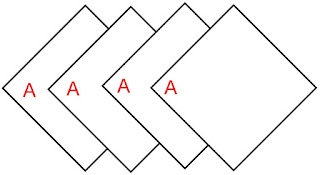 She also glued the sections in a simpler way, which made the book easier to look at and to work in. Too much thinking for mine? Very possible. Because I had a preconceived notion this was a square book and always placed two sides parallel to the table's edge, and sampling told me a spread will open up or down, (and back or front), I mixed things up to even out the up/down element. Confused? Never mind. But if you ever want to experiment with these, try having all Corner As on top of each other in your first one; it makes life easier.

For some years our local cinema has shown Met Opera and National Theatre Live, (or should it be Lives?) I've always wanted to go and marked brochures every year but finally made it on Wednesday, and what a splendid experience it was.

I saw "Rosencrantz & Guildenstern are Dead", (trailer,) a play that intrigued and puzzled me for close to 40 years. So much so when I discovered a beautiful bookshop in St Paul days before I left Minnesota for good, (Jan 1981, near Macalester College,) I bought a collection of Stoppard's plays as my very last purchase. I tried reading the play several times, (plays are my second fav genre to read,) but found this play incredibly difficult to understand on the pages; I didn't bother reading the other plays but gave the book away.

It was indeed good to see it. I can never pick up all or even much of the lines in period plays, but this was a lovely production with strong actors, and lovely but not strictly period costumes. The stage set was minimalist but beautiful, but really, the acting was mesmerizing. Joshua McGuire and David Haig were masterful, but a couple of tragedians with no lines intrigued me more: I'll be on the lookout for Louisa Beadel and Alex Sawyer in the future.

Daniel Radcliffe was in it, too; though I have nothing against him, it was the stark contrast of his depth of theatre training with everybody else's that enabled me to deeply appreciate the others. (Ben and I've been talking about this, with increasing mixture of English and American actors in films we see, many English actors mixing theatre and film careers.) Radcliffe's diction was muffled; his facial expression, hidden behind a beard, nonexistent; and he had a tiny vocabulary of body language. It was only when the camera got closer that his inclusion was justified, somewhat. (Besides the international PR value.) And though this is hardly his fault, he has a markedly smaller head than McGuire and Haig, which made him peculiarly less visible, less noticeable, on the stage.

And one last thing. The fewer the lines, the less significant the roles, very generally speaking the actors were taller and slenderer. This made stunning visuals in the few scenes a whole lot of them were on stage. And I mean, jaw-dropping.

Now I want to read the play.