The Weekend that Was

And I am totally out of touch with a world that could have had Corbin, Sanders, common sense, or our own Jacinda Ardern, but refuses to.

I'd written a whole lot more, but the crux of the matter is, we are waiting for overseas/special ballots and won't know until early/mid-October which way the third party's professional kingmaker will fall, (from memory, this is his third time!), even though politicians have started talking and media speculating energetically. Either way, even if She get in, it will be an uncomfortably slim majority. The good news is, She's still 37.

And there's a good chance NZ$ will plummet, (further,) which makes this a good time to have an online sale, which I decided on the weekend to put off until Dec/Jan/Feb to concentrate on my priorities. Maybe not. I am cutting back on mixed media now. 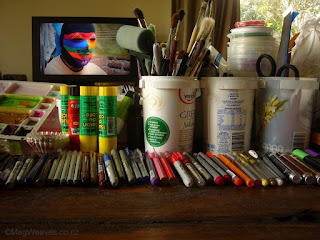 (That's not Her on the telly; it was an advert for an Al Jazeera doco on drug trafficking.) Staying up late watching the telly, moving the clock forward an hour, and then watching some more telly, even though I stuck to explanations/timeline and none of the speculations, I am exhausted, and will now go back to worrying only about nukes vaporizing my country of birth. I'm weirdly confident South Korea won't be nuked, but then who knows in this new world. 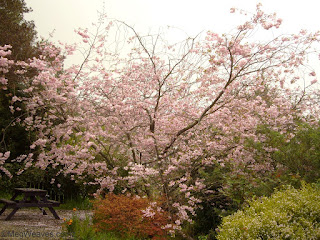 The cherry is 90% open, later than usual, the tree is producing about 60-70% of flowers this year. Must remedy. And here, as in Japan, those delicate flowers opening up means open season for rain/wind and this week we might even have some thunder and lighting to make things interesting, before spring settles in.

The weather has been extraordinarily rewarding to conscientious gardeners; fairly consistent rain-sun-rain-sun cycle combined with sudden warming; flagrantly embarrassing for others of us. But priorities beckons me to the looms today.
Posted by Meg at 9/25/2017 11:50:00 AM