General election here today, (we voted early;) daylight savings starts tonight, (i.e. "the short weekend";) and somewhere in/near South Minneapolis, 40th reunion of Washburn High School Class of '77 is happening later. Oh, and a month from tomorrow, I'm supposed to fly to Japan at the crack of dawn, and I'm just hopin' and prayin' the Two Big Babies would stick their thumbs in their mouths for a while.

I thought I wove these a year ago September, rather than July. Never mind. I washed the yellow-green and the Christmas colored pieces on Wednesday. 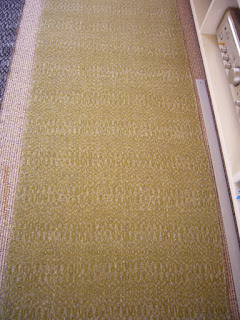 The yellow green piece was particularly nicely woven, for me; the left selvedge is near straight. Most interestingly, the gray warp and the yellow-green are so close in value it's hard to see the design, especially while still wet, and that's a first for me. (The photo is after is completely dried.) 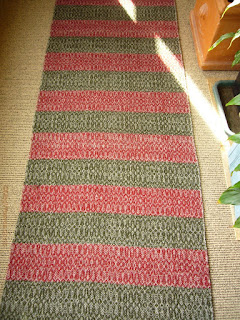 The Christmas-colored piece looks pretty much as I expected. Though I didn't expect the stripes to appear so crooked, (they're not, I just went back to check, excepte for the bottom red stripe, :-D) in combination with the movement of the design. 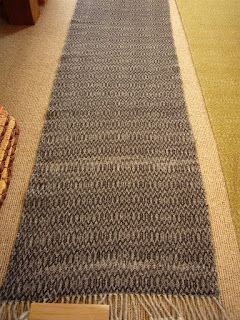 I washed the charcoal gray piece and the leftover as soon as I finished the warp last year. The charcoal gray was meant to be a present for a special friend, but what can I say..... Scalloped selvedges and, goodness me... Back then I understood better the tension problem and knew how I tried to remedy it, but now I forgot. 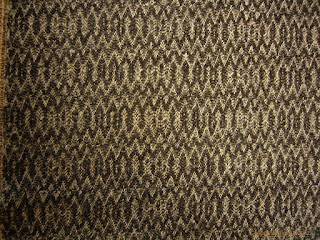 The disappointing thing is, I wove this in what I think is often called Gray Marl warp and a straightforward charcoal gray weft, so the combo shows the pattern nicely. (And sorry for the unfocused pic; I can't find the sweet spot on my glasses this morning; need the hinges checked again as my prescription hasn't changed in six years.)

The warp is the same as my pillars; Mom said she had a whole lot more so I rescued the rest. But are they? My pillars turned out softer, from memory, with rougher weft while I used the plush Possum/Merino/Silk in these, and still these pieces turned out scratchier, most markedly the gray one. I'm pondering calling them "car" or "camp"  wraps. Or similar.

Ben's cold came back this week and we both wasted two days. Tess said her doctor in Edinburgh, (that's Scotland!) mentioned a cold on in Australia and New Zealand this winter. Our own doc Karl told Ben minimum four weeks, so we must have that fashionable cold.

On Wednesday I thought I might just be able to manage the red and baby blanket commissions AND a wooly online sale before I go, but with a month left, I'll have to concentrate/prioritize. Darn, just when I had this rare feeling I was catching up for the blank year, ergo the title of the post. Or maybe this is just the new, new normal; even slower, and managing even fewer things, but trying to feel better about things I do get done. Speaking of which, I can't believe I'm still sticking to faces-every-day (more or less) project, and lately I'm into Picasso's Dora Maar portraits. From memory, these were right-hand blinds, (I don't call mine contours as I'm unruly and all over the place.) 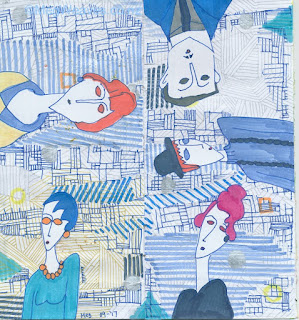 And sometimes I play with somewhat-Modigliani-esque characters. 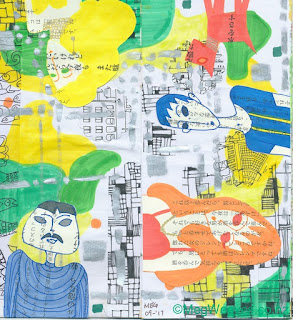 And my first, (I think,) dog!! I'm so used to layers in mixed media now as a result collaborations I overdo them when I'm working by myself. I'd like to step back and try to remember my preference for simplicity, for variety sake if nothing else.

And I get to keep Tess' book since I liked it so much; she's made another for our swap. Bliss!!

For as long as we've been in New Zealand, I saved short stories, story-/character-/plot-ideas in a folder, and from time to time dipped into them, but less and less often. Like any wannabe-writers, I thought some were cracker ideas, entertaining and humorous, but this week I deleted the folder. It's not that I'm not disinterested in writing, but the bulging mess was another source of regret, guilt, and a measure of a different life that might have been. I don't know if this means I'm giving up on another thing that was important to me, or getting better at living in the now. Forgetting things so easily helps. Or doesn't help.

I still listen to copious amounts of writer interview podcasts, and my fav for the last couple of years have been Sarah Vowell and Colm Toibin but I've added Richard Ford of late. So here's a wee present for you: this is the funniest authors interview I've ever listened to, and one of the few I return to every few months.

Colm Toibin in particular gives me so much story and character ideas I'm often not listening to what he says but working on my own stories in my head, which is why I like/have to listen to him over and over again.

Mine's a jolly good life considering everything else that's going on in too many places. And by the end of the day, we just might have a bright, young, honest prime minister with a pony tail. Fingers, toes, arms, eyes, and everything else crossed. That's such an uplifting thought compared to three years ago when we wanted to quit New Zealand. Anyway, go her! (There's a new law here that says you can't "endorse" candidates on the day of the election. I started this post on Wednesday, but reckon just to be on the safe side.)
Posted by Meg at 9/23/2017 01:40:00 PM