Good Thing Weaving (and Moving) Forward is Easier than Backward 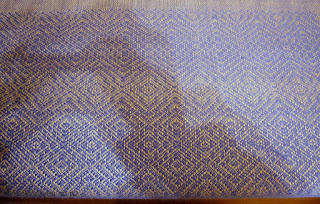 I finished weaving the blue baby blanket; all things considered it was fast. Ish. Although this width, and this draft particularly, was hard on the body, I love weaving on the big loom as we've done the most to accommodate it to my body size. And with no broken warps in the two blankets, (that I remember,) and only a slightly weird tension on the left, I hope, I hope, they finish up nicely. Wouldn't my client be surprised to hear from me after a year of silence! And I'm fine if she doesn't want them. 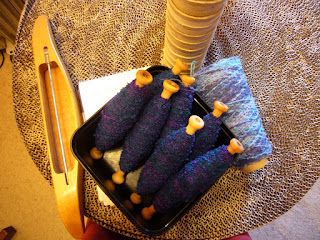 For the warp end present to myself, I'm going to weave a simple twill or plain tube with merino bouclé to make what I hope will be a skinny cushion cover, about the size of half a pillow. (If I run out of the dark wefts, I'll finish with the light.) 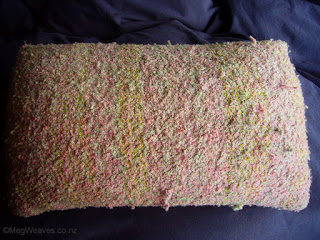 I did this at the end of Cherry Blossom way back, and though it's tiny, I love the cushiony feel. The size, (inside is 30cm*30cm commercial cushion insert folded in half,) is handy in filling the gap behind your back, neck, under a knee, etc. In fact, it's super handy while travelling, and while this one doesn't travel because the bouclé loops proved more fragile than I expected, I might make a fabric-covered one. (And I may even spring for latex foam rather than a regular cushion insert.) Cherry had merino in the warp, this is merino/mohair, and at a slightly tighter EPI, so this will have a different feel, but that's OK.

On Monday, I remembered the Pillars warp-end door piece needed washing. It's been hanging on the basement door for five years, and though I occasionally vacuumed and turned it upside down and inside out, I neglected it completely in the year I didn't weave, so while weaving the baby blanket, I put it through the gentlest rinse/spin cycle, in weak vinegar water. (Against some hesitation, I must add, but this machine does such a great job on our sweaters, so nothing to worry about, right?) 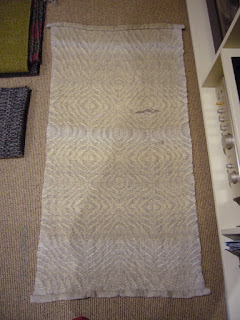 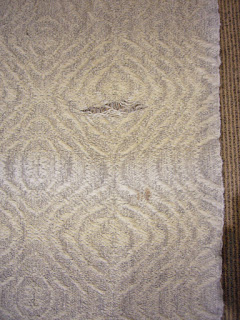 I know! And slightly less grievous bodily harm to the left, almost in the same rows, too. And I can't figure out where the rust mark came from. I might mend it; I might do something else; there is always the compost bin.

That, and the search for suitable wefts for the blanket warp leftover showed me in warm spring daylight the true state of the basement. Usually I can say it's only messy and crowded, but it's really icky after not using, moving things around, and ventilating in the way one does when using a space rather than just turning on the bathroom vent and leaving doors/windows open. Which is what happened for a year.

I've been disgusted at the state of upstairs these last few days as the sun rises higher and I can see dirt in ways different from the sideway sun of the winter, (that's bad, too,) feeling the screamingly dire need for a good clean. (By the way, I'm Japanese, so spring cleaning is not on my calendar when hay fever is at it's worst; Japanese clean house like mad folks at the end December near dead of winter. Mom used to say it sanitizes the house, too. In Nelson we've gone for big cleaning in summer when we can evacuate stuff outside and work long hours, and sanitize in a different way, I suppose.) But the basement pointed out I really was depressed some of the last year, how not only did I try not to think of, but didn't think of cleaning.

In my defence, there was the big food issue, and I kept up with not just laundry but ironing, and I tried/learned new things with paper, and to be faced with not just the garden that's in a bad shape, and I have limited time before I go to Japan with priorities that may or may not fit in that time, and next to no time before we take off South, and really no time before we have Mrs and Dr Cady for lunch/dinner or an extended Q&A, and JB and Ali and hopefully Duane and Barbara from next door, who are all very tidy people. Yikes. I so wanted to have Duane and Barbara over the winter.

So instead of crossing off the baby blankets on my To Do list, (because it's not done, I just finished weaving them is all,) I added "Clean basement".