When Shaft 6's spring broke, I checked and found at least one other not working as it was supposed to, but not interfering with the weaving. Ben promised to repair it once the warp was off. 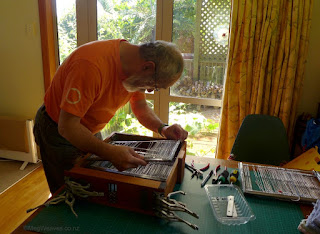 I had no idea he meant everything that could be taken apart would and cleaned as well. A whole lot of washing, drying, waxing and spraying followed yesterday afternoon. And a whole lot of counting. 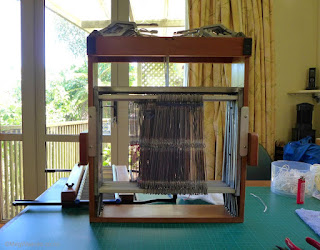 We finished reassembling this morning. QED. Except the height of the shafts were out of whack. We hadn't realized how varied the lengths of the springs and cords were, (and the size of the screws,) nor how precariously someone balanced the shafts so all eight were more or less within 5mm of each other raised or resting.
Ben gutted it again, swapped frames, swapped heddles a bit, (all eight had 81 each but I gave 1 and 2 100 for tied weave, distributing the rest between 3 to 8,) cut one new cord, and now they are once again within a few millimeters of each other, but they taper gently down from the front to back. And shinier and cleaner than it's ever been in my possession; not bad for a weekend's work. And he oiled the kitchen table afterwards.
It's actually quite a good loom. Ex Nelson Polytechnic weaving school, it has not an inch but a whopping 4cm shed, with two warp beams. The castle and beater lift up easily, and the wooden frame is sturdy. The only issue is the aluminum shaft frames being fragile, (one is very warped,) and hard to maintain. It may have been painted at one point, and metal dust collect at the bottom over time. The metal heddles, though not stainless steel, have huge eyes and are in pretty good shape.
If I am to use this loom more often, and indeed weave mostly skinny cotton, an option is to replace the heddles with texolv so I can squeeze in more, and for Ben to replace the frames and spring-system. But it's not urgent. Possibly not necessary.
Posted by Meg at 12/13/2020 03:13:00 PM