Yikes, it's been October for over nine hours here.

We were in Auckland at the end of August and early September, from Sunday afternoon to Wednesday evening; we go to Auckland almost every other year when Ben has a 3-day seminar, (a Microsoft geek fest); some years I gaze at artworks, some years I stay in the room and design, and other years I go to the zoo and wait for the hippos to surface. Every trip, I do my rounds of my favorite bookshops.

Sunday afternoon we spent walking up and down Queen Street and ending up at a Korean Barbecue restaurant, an Auckland treat because there are none in Nelson. On Monday I took a harbor cruise in high winds, just because I walked past a sign that said, "Next cruise, 12 O'clock". It turns out the same sign is there every day, but the wind was pretty rough and we had to contend with viewing, not docking at, one of the smaller islands. Thrilling! Afterwards I wanted to get on another smaller commuter ferry, but the timing was wrong, so I did the bookshop rounds and came away with a small damage.

I also went to the Auckland Art Gallery and saw, among others, saw "Local Revolutionaries: Art & Change 1965 – 1986"; many of the work here felt strangely modern and yet familiar. Contrasting that to my reaction to The Walter Prize 2010 exhibition, (Barf!) I contemplated if up to about 1986 is as far as I can tolerate "modernity" in art. To be honest, I felt dirty coming out of the Walter Prize room. So much of "edgy" art seem to me to expose the underside of the society, as did Caravaggio, but in the far more insignificant, dirty and private/personal arena, and my immediate reaction was to blame the "everybody can be a celeb and deserve their time in the spotlight" mood of reality TV.

Tuesday afternoon, I had an appointment with a staff at Auckland Museum. I had been in communication with a couple of them, and expected to be shown some textiles for about an hour and then let go to roam around the rest of the museum for the remainder of the afternoon. Wrong! A very art-school-ly chap named Finn McCahon-Jones showed me boxes and boxes of textiles, (I had requested "Muslim" textiles, plus some Italian and Indian pieces,) mostly embellished work, but two just-woven pieces, too. They were in different kinds of conditions as all/most of these items had been bequeathed, some after considerable amateur maintenance/damage. I didn't take notes, but loads of photos; because of the museum rules, I can't post them, but here are some pics Finn provided. 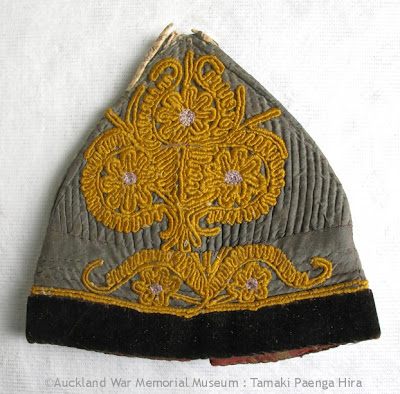 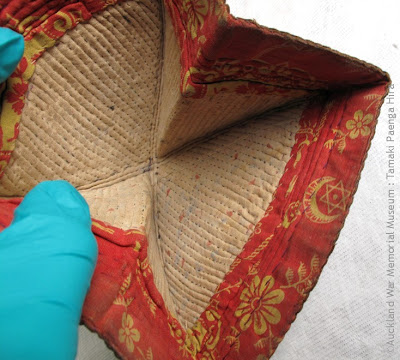 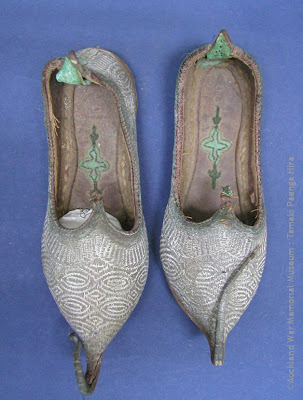 There were household silver polish stuck in between the silver threads on these shoes.

When the museum had an open day some time ago, a staff spotted a woman in full regalia approaching slowly over the grassy hill. The staff ran outside and offered to purchase the entire costume on the spot, and the woman obliged. This made me think a lot about textiles; it was a victory of sorts for the museum, not only to acquire an entire outfit, but to receive all the knowledge that comes with it from the woman; it will be a great asset and would help future students and researchers. On the other hand, the outift may never be worn by a human again, and the woman's daughters and granddaughters will not inherit it. And I had mixed feelings about the fate of this outfit. And the mission of museums in general. 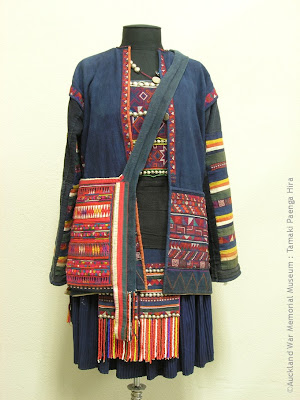 Ceremonial Outfit, Ankh Tribal Group, Northern Thailand
Purchased, 1990, collection of Auckland War Memorial Museum : Tamaki Paenga Hira, 1990.253
Until closing time, Finn and I talked about his knowledge of other art forms, (he knows a lot about ceramics, but because of his work, he has taken lace-making, embroidery and other textile-related workshops,) Japan, Korea, Silk Road, manga/anime, Ponsonby, (a now-posh suburb of Auckland), paisley, and Kohana Reo.
Posted by Meg at 10/01/2010 09:15:00 AM