Sweet & Sour September, Part 3: This, That, and the Other

Most of September felt like I was attempting and failing one thing after another.

After Auckland, I worked hard to weave textured white swatches to experiment with in the upcoming Yoshiko Wada workshop. I had prepared a familiar warp of 110/2 wool, the yarn I've used many time including a 24 meter warp from the same cones on my big loom. For some reason, the warp kept breaking, sometimes three and four at once in a narrow 144 end warp. At once point I even unwound and rewound the warp, but it didn't improve the situation.

The wool felt nice in chain, while winding, and even on the loom. The only explanation I could reach was it spent a few years on the cone on my shelf, and during that time it "aged", making it susceptible to breakage when lifted on the big loom. It appeared ends on Shafts 15 and 16 broke most often. I had prepared three white warp chains, intending to use different textures, fiber contents, and sizes in the weft in about a dozen different drafts, but one day I felt so fed up I took the warp off the loom and decided all three can go into the compost heap.

Another day, I tried to sort the material I would bring to the Wada workshop; this preparation took me a whole day, as the list included quite a disparate lot of stuff. I made up a few smallish skeins of yarns to dip as well. The actual preparation, of stuffing things into bags and boxes, seemed to calm my underlying anxiety about this workshop. I still didn't want to stitch boro, but I was prepared to do anything the workshop brought on.

The week before the workshop, I had a small "heart attack" incident; "incident" because it turned out to be not a heart attack, but a dynamite case of upset stomach. I woke up in the middle of the night with loud palpitations and pressure on my chest, and I regretted not having gone to see my doctor in June when I had a similar experience. After a couple of hours at the clinic, I was "discharged" and prescribed Gaviscon. Still, it must have been a pretty upset upset stomach because it took 48 hours for Gaviscon to work.

The next day, Esmae Emerson of Melbourne came to visit; (her mum lives half an hour away from here.) It was the first time we met, and my house was a mess (as usual) with weaving and design stuff strewn all over, but we had a lovely, lovely time talking about weaving, designs, yarns, and the acceptance of weaving as "art". She brought me a lovely bouquet of yellow and orange spring flowers, among them were two fancy Dianthus filling my room with sweet smells.

The subject of business cards/swing tags has been on my mind again, not because I'm thinking about marketing, but I've been in the process of shifting pieces among the three galleries in Nelson, and withdrawing some pieces. I was fed up looking at my tags. I love the idea of having a home-made feel to the tags, but fading home-printer-printed tags are not a good look at all. 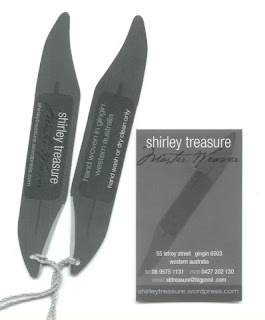 Shirley Treasure of Australia sent me a picture of her tags; she wrote: "I have scanned both back & front of my swing tags & my matching business card. They are much fancier and glossy in the flesh but you can get the idea."

I love her tags, and played around with the idea of making my stuff a bit fancier, too, I think I'm keeping it simple and sticking to my old yellow logo and Monotype Corsiva, and get a local printer to produce them. Among other things, I'm not looking to rebrand, but just to make myself look less tacky. I like what I set up years ago, even though it was intended as a temporary solution at the time. You could say it's grown on me, and I've come to identify the logo/tags as representation of myself. The home-made feel will come from my handwriting the name of the piece, the story behind it, and the fiber contents, on each tag. At least that's the plan for now.