I went to my second and last indigo duty this morning and dyed some stuff.

Yesterday, looking at books, Internet images and practices I'd done, pole-wrapping was still my favorite, so I examined the brown cotton shirt I dyed previously. What I liked about the way this shirt turned out is the soft shapes suggestive of autumn bellflower buds, instead of the sharp cool patterns more often associated with this technique. I remembered I didn't push the cloth as firmly as I thought I should, and instead of strings I used rubber bands.

I went searching in my closet and this was the only cotton-ish (20% polyester) shirt I had left, but I didn't think the strips would get in the way. 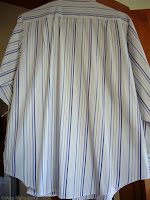 I wrapped it last night, careful to leave the bottom of the shirt, the collar and the cuffs free of patterns. I tried to make the creases even, but didn't push the cloth too tightly. Below are the backs of the two shirts. What was interesting was while at the Polytech, after it had gone through one hand rinse and one machine-spinning cycle, it appeared to have only dark and pale areas, and the stripes were very visible. After I came home and hung it on the doorway, more nuances appeared minute by minute, and the stripes became less annoying.

I suspect that this shirt was pushed even more loosely than the brown one; I suspect it contained more air bubbles so I have more unseemly blotches. I also need a pole with much greater diameter if I am to continue dyeing shirts of this kind.

The funny thing is, when you're first learning and experimenting, anything you make tends to look great, though you may not admit it publicly; but once you've experienced the technique and try to replicate or improve on it the second time, they don't come out as planned. Or it is just me? I tried not to have any visions or intentions for dye projects, but I think the brown shirt has a nicer pattern, though it's hard to see in a photograph because the dye is so pale.

However, I have one area in this shirt on the shoulder that I really like! 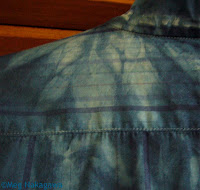 Next is a machine-woven silk scarf Mom bought in a dye material shop in Japan. Before dyeing, it the woven pattern was very hard to see. 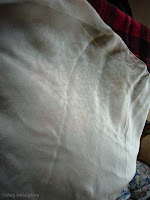 I started stitching on this one during the workshop, but I changed my mind yesterday. So I tried ple-wrapping but after four or five tries I felt needed a larger or longer pole to do the task properly. I also did not like the way the silk was going on the pole.

Remembering my favorite result from the workshop was an "unintended" design, I tried the same method. I got greedy and folded and refolded the piece half a dozen times, and then clamped different areas a dozen times, and the final result is this. I wanted large areas of totally saturated indigo color, but I am terribly disappointed with this piece.

Even though I folded the scarf in odd angles and divided the piece into odd numbered sections and every other way I could think of to make it irregular, the two Tiki-like faces came up surprisingly similar, and the three large designs appear almost centered, and there is nowhere nearly as many smaller pale areas I had hoped to see. While the large areas of blue are wonderful, the three skeletal images are spooky and so not in my taste. I prefer the brains. After a few weeks if I really don't like it, I might go dunk the whole thing in the vat again.

As regards dyeing with indigo, I am unclear the difference between rinsing to get rid of excess indigo vs rinsing to expose indigo to oxygen. Are they different? Can anyone explain this to me?

When the workshop was taking place, New Zealand had a cold spell, and we were dyeing twice a day, so there was a nice delicate bit of "flower" floating on top of the vat, (think old-fashioned suds-bubbles in the washing machine but in fabulous shiny indigo color). Today, when I first opened the vats, I was taken aback with the flowers covering the surfaces of both vats, but more to the point, even while I was dyeing, there seem to be more of it surfacing/gathering/popping-out-of-nowhere. Is that a good thing or a bad thing, does anyone know?