I ended up being productive yesterday, but without show-able results.

I photographed some color inspiration shots from two recent issues of "View: Textile View Magazine" for my scrapbook.  It's a heavy, glossy magazine with loads of visuals out of, I think, Amsterdam, but fear not, it's in English and if you can get a hold of it in your library, you may unexpectedly spend a pleasant afternoon gazing at the pictures. (I've been disallowed to view the video and cannot go do the "tour" of the site. If you can, can you please let me know what's there?)

I read one article in the Jul/Aug 2009 issue of "Crafts" magazine, published by the UK Crafts Council. It was related to "Telling Tales: Fantasy and Fear in Contemporary Design" exhibition held at the V&A, July - October last year, and there is a catalogue/book to go with it.

The article's title was "Tales of the Unexpected", and under it was written, "Coinciding with the V&A's 'Telling Tales' exhibition, Gareth Williams explains why today's designers love narrative..." So I was expecting a kind of a reflection on art education's penchant for concepts and processes; I could easily have missed the point, but I didn't find the answers to the "why" question. Instead, I learned that the "world" is now divided by movable, blurry lines into art vs craft vs design, and within design, there are design (mainly industrial) and design art (closer to craft and sometimes fetching art prices). And where a particular piece of work belongs to depends on rarity and connoisseurship.

That simplifies things, doesn't it?! 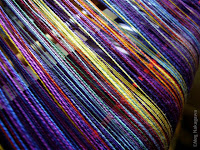 Then I tried to identify a threading mistake in my purple warp. Summer & Winter has such a predictable threading it's supposed to be dead easy to spot a mistake, but after two hours of checking from all conceivable angles twice or more, I still could not figure out why I had two extra ends. I'll do some more sampling and if I still can't see it, I shall make them float.

I had to sit down and make myself read the article yesterday, because over the last few days I've discovered a quirk in my view of life.

Hay fever this year hasn't been as bad as the last two years, or so I keep saying, but last weekend, what with the sun and the heat and the wind, was bad. And as ready, willing and able as my mind was to be productive, the body had a different idea. That's when I noticed that since my mild-to-moderate depression has been better, I've been so busy trying to be productive I forgot how to simply be. Instead of regretting not winding a warp or fringing a scarf, and literally pacing the house like a trapped beast, I could have sat down and smelled the roses, since I've been bringing in many from our rose patch this season. Or I could have sat down with a nice cup of tisane. I knew this, I was aware of my options, and still I paced.

I could have read, but I then couldn't, and I knew why. See, we don't have comfortable chairs in our house, and it's mostly because I'm so short and have short legs my legs dangle and circulation is cut at the knees. I've seldom been comfortable on any chair as long as I can remember. So when I read, I often lie down on the bed or on the floor. And because I lie down, I associate reading with either bedtime or sick days, (even when I'm ready about weaving structures and studying,) and feel guilty about reading during the day when I'm not sick.

So it was Sunday afternoon that because I wasn't sick and the sun was out in full force, I couldn't even allow myself continue to read the Summer & Winter book. I can't remember what I ended up doing. I had much better work/relaxation balance before depression, but since I've not done much in 2009/2010, I'm in a rush to do things, anything, before I get sick again.  This is not a self-fulfilled prophesy, but the reality of my life.

Oh, overthinking, including the tag problem, is just another tendency of the depression.  I need to be quicker on my feet to get busy thinking about/doing something else at times like these.

The Summer & Winter book, is turning out to be a treat, when I do read. I can't remember which books I concentrated on when I first learned about the structure, but it wasn't the Sullivan book.  (Wow, isn't this embarassing, I mention the Sullivan book in April, but earlier this month, I had forgotten I had it!)  It starts from the traditional use of S&W, i.e. the traditional American coverlet, so it makes sense the weaving software shows the design with the pattern weft and it investigates how to modify/extend the structure.  For now I'll just read it, and I'll later read it again taking notes, so a post on my discoveries is forthcoming.  Suffice it to say, I'm glad Ali put me on this track or else I would have never looked into a two-shuttle structure myself.

Now that I'm not going to India Flint's workshop, I was going to put away my to-be-dyed swatches for the time being.  But Collen has planned an evening of Indigo dyeing and pot luck for next Monday, so I'm thinking of sewing up a simple garment made up of the swatches I prepared for the workshop; it'll be a patchwork of different kinds of cotton, in white and in color, some machine-embroidered and some in gingham checks.  They are on the thin side to be a proper garment, so maybe an overskirt or top to go over a T-shirt, but I'd like to construct the garment first and then do the stitching so the dye design covers the entire garment and over different fabrics.