I had to stand at an angle to be able to show you the "pebbles". I finished the second sample, and it's not looking good.

I discovered loads of reading mistakes from my lift plan in the first, blue, sample, and I wasn't confident with the second, yellow, one. I kept amending the plan; the double lines indicate a change in the lifting pattern, and I amended up to six lines this afternoon. 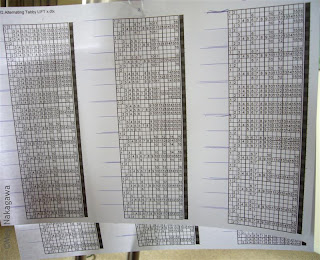 Plus, because warp ends kept breaking at the left side in the blue example, I beat the wefts not as firmly with the yellow sample, making the color areas not as saturated as the blue sample.

Hardly an exemplary sample to attach on my Sketchbook page; I kept the warp ends in the heddles in case I want to weave a third, more respectable sample for the page. 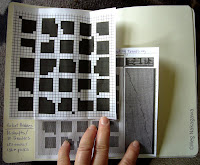 I could really use some success right about now, and by success I don't mean anything big, but just something to turn out right.  I've been working diligently and consistently, I have beautiful yarns and equipment, and some of my plans aren't that bad, but the execution has been sucky at best. I'm not sick, I'm not down; just exasperated and in need for some validation or vindication to stay being a weaver, I guess.

Two weeks ago I have a lovely long lunch with Jo Kinross the organizer, and she was do encouraging and inspiring I was all ready to jump right in.  Among other things, we talked about what we want to get out of making things, and in my case it's to make something that I can be happy and satisfied with.  And it hasn't happened for a while.

In the first instance, this was a financial decision; both our cars are old, ('89 and '94) and at the twice-yearly maintenance last week, both needed some bits and bobs replaced.  I'd been sitting on an email to Jo for three days but I finally sent it today, and in retrospect it feels like the right decision; I need to concentrate on weaving because I can't stand this dry spell with nothing nice to show for.

But Jo, Colleen, a few others and I are planning on an Indigo Dye evening in the near future, so it's not like the dye workshop morphed into greasy car parts I will never see.  Not entirely.
Posted by Meg at 11/10/2010 05:40:00 PM