Do You See Patterns? 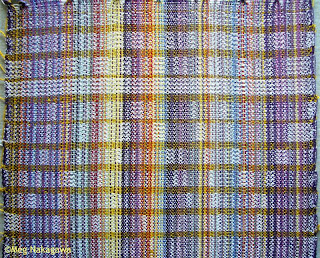 This is the sample swatch from my purple warp.  I used white warp, and lifted one pattern shaft at a time, separated by yellow plain weave bands, so I can see how I distributed the warp on different shafts.  I tried to draw W or M or N across the fabric, and though I couldn't help including some quirks, the distribution looks pretty much the way I intended.  Although that's not going to matter much, because I'll mix all sorts of colors in the weft, so the woven cloth will be a symphony of colors, with square bits.  My P2P piece doesn't reveal clusters of warp ends in lower numbered shafts on the right side and moving to higher number shafts towards the left.

I'm beginning to understand the pattern weft being positive space of the design in Summer & Winter.  That is what Sullivan says, based on the American Coverlet tradition.  At the same time I'm accustomed to thinking in rising-shed mode, visualizing and weaving with the movement of the warp yarns in mind in the first instance.  So I'm aware in Summer & Winter, I'm in fact looking and thinking about the background as I weave. And I hadn't realized how set I am in this way of thinking.  But then many a times I preferred the B-side of my pieces when they came off the loom, so it's not a big deal, as long as I keep this in mind when reading Sullivan's book.

Thursday night, as looked at my swatch, I was pleasantly pleased with the yellow, plain weave band breaking up the Summer & Winter areas.  I have thought of including a plain weave band in the scarf, but most probably either in dark purples, or stay with the color changes but just weave plain at regular intervals, to include some kind of regularity or predictability into the piece.  I went to sleep thinking one day I'll have to think about the balance of freedom/whimsy vs order/predictability in cloths, and where I want to go about seven to 15 projects from now.

Friday morning I showed the swatch to Ronette before class. (She's also has a  lot of experience weaving Summer & Winter, particularly for garments.)  Her reaction was, since the color distribution was so erratic, (that's my word,) she thought a more regular "tie-up" (her word) would bring in a "pattern" into the textile, because she looks for a pattern/patterns in flat textiles.  We agreed it mattered less when the scarf is on a person.

I dissented, not exactly disagreed, not aesthetically, but because my Summer & Winter cloths on her table loom are meant to be all about letting go of my control-freakishness. And she laughed, and approved.  But I also told her about the plain weave band, and then, I think, we were interrupted.

But what does "pattern" mean?

In textiles, in the first instance, pattern means warp- and weft-wise repeats to me; as weavers, that's a no-brainer, yes?  These are structural and visual predictable repetition in units, especially when color texture changes don't disrupt the appearance. (E.g. threading 1-2-3-4-1-2-1-2-3-4-1-2- makes the warp repeat easier to see than 1-2-3-4-1-2-1-2-3-4-1-2-, though I think this latter trick, done well, a wonderful trick to show the loth a bit more complicated than it is structurally.) In jacquard-woven and printed cloths, I try to identify similar units of designs.

I induce that I define patterns as repetition of more or less identical shapes and liens. The word "formation" is also nearby on my mind map when I think about this.   But is pattern synonymous with repetition?

Do you look for patterns, and how do you define them? 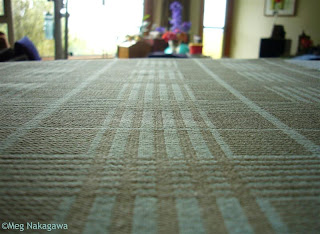