Saturday Morning Blather (or Thrashing About)

Earlier in the week I was rehearsing my lines and revising them for when the group finally meets for the first time.  When I talk, I go off on a tangent easily to get easy laughs and obscure the point, and in this instance the points are too important I dare not confuse, so I was arming myself with a bullet-point list.

* Original reason why I wanted the study group: "How to show woven cloth in the textile art context"
* Restriction of the mechanics of weaving
* My unwillingness to use most other "techniques" in the final piece/s
* The integrity/standard/cohesion of the group collectively vs my place in it

But your comments helped a great deal in reflecting on the issue from different perspectives and I thank you deeply, sincerely, wholeheartedly.  You also subsided the first phase of my hysteria, thank you!  I also helped myself by being back on the loom, though the loom refused to cooperate for too long.

Colleen Plank of Wrapture has a nice little exhibition at Fibre Spectrum this month; some dye work, some felt work.  I knew couldn't go to the opening so I went earlier in the afternoon and found her still giving it her final touches.  I'd forgotten my camera, but I took some with hers, so when she sends me some, I can show you.  After discussing favorites, she said to me in the nicest way, "You don't really dye, do you?"  I love people who understand me: I'll dabble in anything if it gives me pleasure, but no, I won't do anything seriously if I didn't think it will enhance my weaving.  But then, Colleen is an ex-weaver.

See the first photo here? Then see this!  Ta da... I, who seldom win things, won the lucky draw, and got the purple stainless steel silk. Yay!  I told Sampling I feel like a CSI suspect, weaving a stainless steel scarf to gently thrash someone's throat! She laughed her gentle, elegant laugh, (OK, it was an email, but that is what I heard,) and told me these yarns remember shapes.  So I need to come up with a really bumpy plan, probably mixing this with spongy merino or similar.  She's lending me her scarf so I can physically feel the finished fiber, and also gave me a wonderful idea of what to do with it afterwards.

Yesterday's drawing sessions covered fast drawings with resist and then the use of wash. What I really wanted were truly black paper so I couldn't see my crayon or oil stick lines. We had between five and ten minutes for each drawing, but I had to do two in the time or else I would have fiddled too much and regretted later. 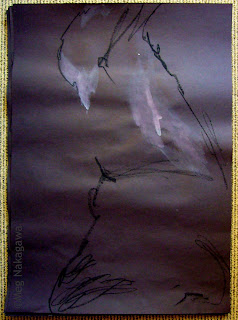 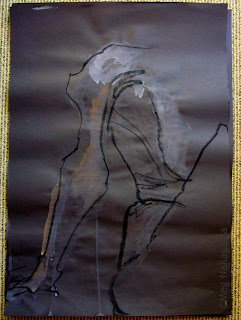 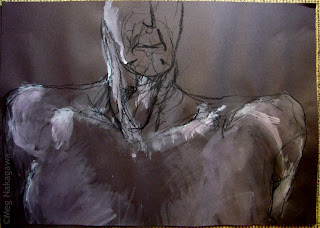 I had a truly wonderful time in the end.  I'm working in different from others, which makes me wonder if I'm not understanding the instructions correctly, but I have a "tendency" (not a "style",) which is to me not unlike a painter I don't really like, Schiele.  My mind seems to enjoy drawing exaggerated body shapes, and my hands don't seem able draw fluid curvy lines.

For the first time I thought I'd like to do something with my drawing; not sell or show, but give it some consideration and based on the studies I've amassed, draw something which signposts my progress of the first three years.

And speaking of a painter I don't like, I finished a biography of van Gogh. What a peculiar, difficult, unlikable man!  I still don't like his paintings, but I got another biography and two books of his portraits from the library.  His antics are addictive but I'm amused/alarmed how much empathy I feel with his people-related mistakes.

In July/August 1963, Mama and I sailed from San Francisco to Yokohama on a passenger ship named (The) Argentina. Mama was pregnant with my sister so the trip was hard on her, but I recall it as an another-worldly very-long holiday experience.  Among other things, I learned about the International Dateline, and without understand exactly how it worked, I learned that if I played the cards rights, I could have a 48-hour birthday.

Early tomorrow morning, we set our clock back an hour to end daylight savings for the year.  So not quite a 48-hour birthday, but I'm given an extra hour.  Four to five decades too late, as nowadays I can't even come up with reflective/contemplative thoughts, but it still feels a tiny bit special.
hurray!
Posted by Meg at 4/02/2011 01:36:00 PM