I'm not doing much, but the arms are going crazy. I do the physiotherapist's menu once a day most days, though I suspect that's not enough. I haven't done anything strenuous in a couple of weeks, just minimum housework. What's most aggravating is by now I should know better about my condition and know how to live so the arms can be better faster, but it's not going that way. In the mornings I stare at my To Do lists and wonder what I am capable of doing that day and this has been doing my head in.

A friend has been doing my head in; she works hard at her art, she's good at what she does, but also feels she deserves more recognition and financial rewards, that people should be coming to her, and she's disgruntled; I used to enjoy talking to her a great deal, but after listening to her for most of this year, her sense of entitlement has been doing my head in for a few months.

I've had a mild virus last week. And a dental emergency the week before that, which led to major money worries for next year. Ironic as the emergency happened the day I figured if we can pay our health/life insurance in April instead of January, we won't be in such a bad shape every summer after we pay our house/contents/car insurance in November. I knew this for ages but never took action. That almost feels immaterial now; I'm shopping around for a different dentist as we don't live anywhere near the right zip code to be his patients anyway. The strangest thing is, I can manage emergency spending of three figures by scrimping and saving; four figures worry me but I can figure out a way to manage when I can approach it calmly, but a five-figure dentist fee? I can only laugh out loud and live in denial. But that's doing my head in.

In case you hadn't heard, there has been a small event talking place in New Zealand, called the Rugby World Cup. We haven't been big fans of rugby (union) for about six, seven years, (players' high salaries, drunken shenanigans, wife-/girl-friend beating and name suppression, etc,) but I've been watching almost all the games in the last two weeks. It's something I can do without using my hands much. But have you heard there is an oil spill on the east coast of the North Island of New Zealand for the last two weeks? Last night's top news item was how the All Blacks celebrated their win (against Wallabies/Australia) in their underwear! And we have an election at the end of November, with a referendum on our voting system; all four choices sound like something you pick up kissing the wrong guy or girl. And yes, all this is doing. My. Head. In.

Group R met yesterday; one member, Judy, left to concentrate on her work so now we are five and that small change made a great difference; five feels much cozier and less formal.  It was good to see everybody, but nothing earth-shattering to report. Changing Threads is going ahead in 2012, but there is no size limits this time.  Submission closes a fortnight before Creative Fibre National Exhibition, but they open on the same night.  And five months after that, Group R's "Beginnings" exhibition opens. No, they're not doing my head in, but I'm extremely frustrated I can't work.

So, I guess, overall, I've been frustrated and angry how the second half of this year has turned out.  Especially since I felt I finally got the hang of weaving more regularly, not just planning and thinking about it.  It appears very often when my weaving life is on an upward swing, something happens to take away the inertia.  So I've kept my head down and tried to stay calm, and have been making up and checking off items on To Do lists; mostly to do with preparing for our upcoming trip, but with art- and weaving-related things making an occasional appearance.  Yeah, I feel a bit sorry for myself, but being a victim doesn't get much done, so I try to keep my head down and bum up most days. 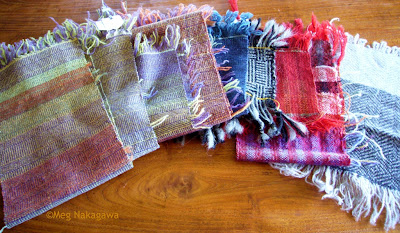 Mom wanted hints on what her students can do on two shafts; my Log Cabin samples fit the bill.  I've also posted about Silver vs. Golden Ratio in my Japanese blog so we can discuss it.
Posted by Meg at 10/18/2011 10:59:00 AM

Email ThisBlogThis!Share to TwitterShare to FacebookShare to Pinterest
Labels: from Group R to Strands, from WYSIWYG to Beginnings 2012