Yesterday Mom and I went to Iwatate Textile Museum to see Indian embroidery/quilting, mirror work and appliqué. It's a tiny room chock full of older, (late 19C to mid 20C) handiwork made to be used by the maker or her family, most of which were garments or decorative cloths for special occasions, mostly weddings. We were super lucky because one Mr & Mrs Aida had made an appointment to have a staff give them a guided tour of the wee exhibition when we arrived.

Mrs Aida trained as a weaver but it'd been so long she doesn't usually offer that information, but her father owned a Tsugaru (a region of Aomori Prefecture at the top of Japan's main island,) art-craft shop, which Mr & Mrs Aida took over. Among other things, Tsugaru Kogin came up in our conversations in contrast/comparison, mostly importantly, the length of time it took to make one piece, the private nature of the finished items, family/regional uniqueness, and the recycling aspect. Good thing, then, that I had some info to fall back on as regards Kogin, because I knew what he was talking about, and Mom's India textile fever was fueled even more; she's been wondering if she can go to India one last time before she gets older. She'd seen and visited most (all?) of the regions represented in the exhibition. I only know what she told me but was impressed with the fine embroidery/quilting, and touched by the very personal/regional motifs.

One of the things that came up in our conversation was how we don't appreciate textiles and particularly our used clothes because so much variety/quantity/quality is available for a relatively cheap price in our modern life. Ben and I try to think of ways to recycle old clothes, and so far, rags for cleaning the house, looms and cars have been the extent of our bright ideas, (a bunch of not-too-old ones are given to charity,) but I have in mind keeping old T-shirts, cutting them up and quilting/connecting them in two or three layers to make a summer or picnic blanket for us to use, embroidering whatever motifs that come to mind and not worrying about the finished, overall look. Worth a try. 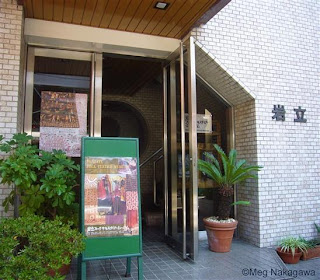 Admissions here is mere 300 yen, apparently unchanged for years. Mom thought even if they raised this to 500, she wished they had even one A4 sheet with a brief history/description and a photo of their representative works to give away; not a bad thought.

Mom wanted to visit a newly-discovered yarn shop just up the road from Iwatate, so we hiked up an upmarket residential street. And then we got so we lunched at a tiny soba (buckwheat noodle) restaurant, which turned out to be quite good, and afterwards asked for directions. The shop was a block away. Where we ended up turned out to be the Jiyugaoka branch of the Saori no Mori establishment, and the manager is the second son of the senior Mr Jo in Osaka.

I had never heard of Saori until I "met" Terri Bibby before the first SSVE, and when Kaz Madigan signed up, I was almost uncomfortable about this cult-like group because the members appear utterly and uniformly enthusiastic about Saori philosophy. (I, a lapsed Catholic, Agnostic/Skeptic, stay far, far away from organized religion and political groups.) I still haven't read the Saori philosophy, but follow enthusiastically Kaz's description/explanation of their equipment/tools. So I went in with a bit of skepticism, hoping if I can pick up some good quality yarns the short hike would have been worth it. 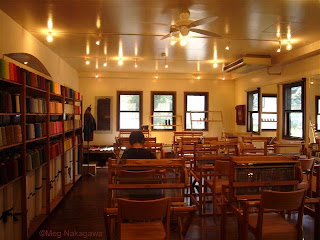 The yarns were good. In fact, we didn't spend nearly enough time looking at them, because Mom focused on their good 100% cashmere only, but we brought home with their sample book. Above is their classroom.

The young Mr Jo is one of the loveliest young man I've met; extremely soft-spoken, genuine, and super enthusiastic about Saori and, perhaps because I kept asking only about the equipment, knowledgeable and confident about the superiority of aspects of their products. And did I mention he was lovely? Even though there were two students working in the classroom, he spent over an hour with us explaining why a certain mechanism was employed over another, how it came to be, etc.

Though there's plenty of writing about how Jo Misao started weaving, their looms started when senior Mr Jo, (Ms Misao's third son,) started building one for her. And because there are other folks who have been weaving on Saori looms for over 30 years, as they age, the looms get modified to make it easy on the body. In recent times they began focusing on physically handicapped folks, making the looms and warping boards accessible by wheelchair, for e.g. Senior Mr Jo lives, eats, and dreams loom improvement, and the best ideas come on the bullet train, apparently. We were so impressed, both with the quality of the equipment, (basic but sturdy,) and the Jo family's thinking, and their business acumen. Andwith the looms being improved to suit the physically not-so-robust, it's become a very attractive alternative to a trip to India for Mom for when she needs to downsize her loom room. Which is not too far in the future, fingers crossed.

Me, I always imagined visiting Kaz and Sampling in Australia some day. Lately, with Kaz's posts on her workshops, I've started to feel a bit curious, (get it?), about her Saori workshops as well. Now I'm thinking I might even be curious enough to piggyback when they visit Saori no Mori in Osaka in a couple of years. For my work, I wove only plain weave on a rigid heddle for the first seven years and for now I'm over it. I'm now far more interested in multishafts and complex weaving design, if not structures, and given the chance, I'll jump at an opportunity to try more-than-16 or a jacquard. I've also been and remain lukewarm about what I preconceive to be the representative aesthetic of Saori cloth. And I don't want to teach weaving, at least not now. But I can't deny I sense a more basic, (primordial??,) pull in the Saori/Jo Family attitude/posture towards weaving and creating that's worth investigating.

Bonus: my nephew's high school stands across the street from this Saori outlet and it was great to see it. It's so near the convent school I went to but I had never heard of his school even though it's possibly older than mine. Said soba restaurant, though on the expensive side, is a block further up the hill from Saori, on the same side of the street.

If you visit Tokyo and are interested in Saori or their equipment, go to Kichijoji on the West side; Saori's other outlets is there, (though the walk from the station is a bit longer,) as is Avril, (their shop link doesn't work,) and Ananda, who started out as an Ashford dealer in Japan, I think, but also has strong India connections.

Then I went to Tokyo Art Center because I wanted to return a shuttle I bought in March; it just didn't balance well in my hand, so I wanted to return it as soon as I went back to Nelson. They said it's missing a piece, (the center wire bit that holds the bobbin fell out, which I hadn't noticed but would have thought they'd worry about,) and I was happy to buy a new one right in their shop or have the cost of that reduced, and anyway they can't take back a used item, (which it wasn't). The manager didn't even bother to come out of the back and talk to me, so I was a  bit miffed considering how much yarn I bought in March, (and had the receipt). But I understand their position, so I'll just keep. Or sell it online later.

I went back to Bridgestone Museum to buy possibly my last van Gogh book this trip. This one claims there were at least 18 van Gogh works in Japan at the time of publication in 2009; I'm glad I'm not rushing around trying to cover all "nine" around Japan; Daubigny was the perfect last piece for this trip.

Mom and I sauntered down the Ginza shopping strip, which Mom has frequented since she was a student in the early 1950's but not in recent years, and I as her daughter thought it a default shopping area in preference over other places in Tokyo even though everything is so expensive I only ever bought greeting cards, pens and, ummm... shoes. Then we had a light supper at a lovely Indian restaurant recommended by the Indian importer who lives in Kyoto.

Lovely day, but intense; Mom's satisfied with the India injection and is dreamily walking around the house weighing out the practicality and cost of a trip to India or a lovely new loom. Me, I need a few not-talking days, to be honest, to ingest and organize thoughts. In reality, I need to tie loose ends, (including fringing two scarves), look into the Cubism thing one last time, and continue to pack.