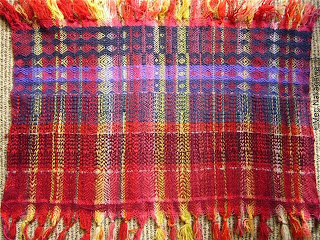 Apologies for the color combinations; I needed to test weaving drafts so I aimed to kill the warp colors. I still can't see very well the first (bottom) three, but enough to know the second is no go. The last square-y one was a product of Ben's one-liner.

After the first sample Ben and I were discussing bigger motifs, but to do that I assumed I'd have to rethread, which I don't mind but it would  have taken up time. I now know, and Ben knew without knowing he knew, that in the first instance I automatically visualize warpwise design/everything, so naturally, to widen the motifs/units, I felt I needed to widen the threading repeat/unit. When he mused, "what's wrong with big sideway designs?"

So I tentatively made this draft, and sampled it along with more same-olds, and Bingo, the boldness matches the mood of the warp even though the each unit isn't that big. Again, because Ben said, "you could cluster motifs and make them look big." I knew that. And the look of the cloth is moving further away from the original cloth, but the mood not necessarily.

I shall weave with wefts seen in the first sample, probably the light yellow green to start with, but there are so many variations and permutations of this draft that would work in this instance I'm going to have a bit of play with it first.

Do I need to pay him consulting fee? I'm weeding "his" garden again this morning; does that count?

PS: Both samples are cushy, airy soft, not "slick", which to me is discordant with the look of the cloth, but I'm not sure if I need to spend any more time thinking about this.

PPS: Two airy red warp threads broke so far. I'm been contemplating resleying to 16 or 15EPI, but that will further squash the design, and make the cloth wider than I would feel comfortable weaving. I could resley half and sample. Hummm.
Posted by Meg at 10/01/2013 10:08:00 AM