I'm finding myself doing things Mom did, and being annoyed by things about myself Mom did about herself. I make snap judgments without checking facts, which I think I've always done but tried not to while in Japan to lead Mom by example. LOL. I'm also checking things twice and thrice just to make sure I've got it right, which is good, but ending up with misunderstanding. Case in point: good friend Claudia is moving to Sydney and I'm really sad. She sent us an invite to a farewell weeks ago so I had it on my calendar for last Saturday forever. Came last week and I wondered if she had costume/theme requirements, because she does sometimes, so I reread the invite and "found out" the do is at 6PM on the 6th, the Sunday. So we got all dressed up and went to the venue which was closed on Sundays. I even blow-dried my hair so it looked pretty good until Monday afternoon. And now she has no spare time before she leaves, so... BOO HOO to me.

For the last two weeks I've been tired, not tired-tired, not sick-tired, but just blah-tired, and I've wasted a lot of time gazing at the telly or playing repetitive computer games. Except the couple of hours many days I garden, but I don't last very long. My weeds are so healthy this year they don't come out easily and after about 90 minutes my left arm starts to shake. Last Thursday I had to quit abruptly because I got pins and needles instead of the shaking. That and the rain has put a temporary stop to my good intentions outside, and I feel useless and lazy.

More recently, I've been doing anything in preference to nothing productive. You know, small things; just keep moving instead of sitting on my regular position. So my cashmere thrums are now sorted. All my empty paper bobbins are in one ice cream container. All my collage material is in one box.

But you see, I was so good turning to collage to settle my mind in Japan, why can't I do the same here???  Gee, I was productive in Japan, even though I wasn't aware of it then.

Perhaps now I''m only procrastinating, finding the big things on my list too overwhelming?

Sometimes I have to relearn the way I usually do things. I had my first full day in town yesterday. Yesterday morning I had to think of what I usually carry in my bag; I had to make sure all the cards have been taken out of my Yen wallet and into my NZ$ wallet; I had to make a list of places I must go, (I usually do this, but it took longer.) I had to recharge my phone, and found out the last time I looked at the 2013 diary was January 24.

The clincher was, during the day while seeing many friends and retelling where I've been most of this year, I had to stop and hear myself speak to make sure I was speaking in English.

Most days it feels as though I never left. Some days it takes me a bit longer to recall.

The only productive thing I seem to be able to slip into has been to read about van Gogh. I caught myself being interested not only in the stories and the flavors added by different authors, but in what is omitted. I believe it's impossible to have a "definitive" version of a person's life, anyone's life, even in , (or especially in?) autobiographies, because a life is never just dates and places and names, but interactions, and that includes view points. And with a complex person like Vincent, I see that many authors are being scarily selective in what they include/emphasize.

In the many books and documentaries I've read/checked so far, there was only one mention of  bullfighting in Arles, for example. Apparently, the best matador (of the day?) is supposed to cut an ear off his kill and throw it to the spectators for good luck. And Vincent went to see bullfighting as he painted the spectators.

And now, I'm seeing some Vincent-esque scenery in Nelson, which is a nice in-between place between Yokohama and Nelson. This is at the back of The Suter yesterday. 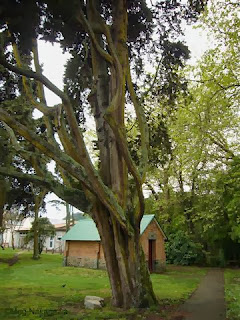