The Weaver is Confused

Originally,  I wanted the pleated piece to have different width for the A- and B-sides, one having a somewhat interesting twill while the other, simple and straight forward, just in case the pleats didn't appear the way I imagined. I didn't like the "interesting" part of the draft in the link, so I made half a dozen but unsuccessfully. Then I found this 8-shaft undulating twill on handweaving.net, simpler than what I had intended but simple and elegant, and I liked it immediately. (In the first instance, probably because of the warp color, but also because I saw Dr Ralph's name again.) So I modified it for a few possibilities. 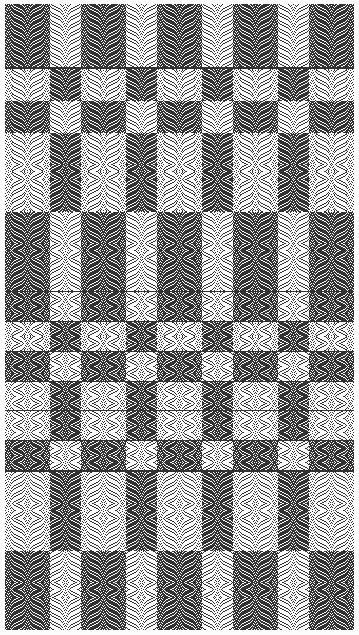 The two blocks are slightly different in width and design but not too much. Never mind, in case the pleats don't pucker, at least I will have an elegant twill in two colors. Ish. I don't know how the patterns will appear with skinny wefts. 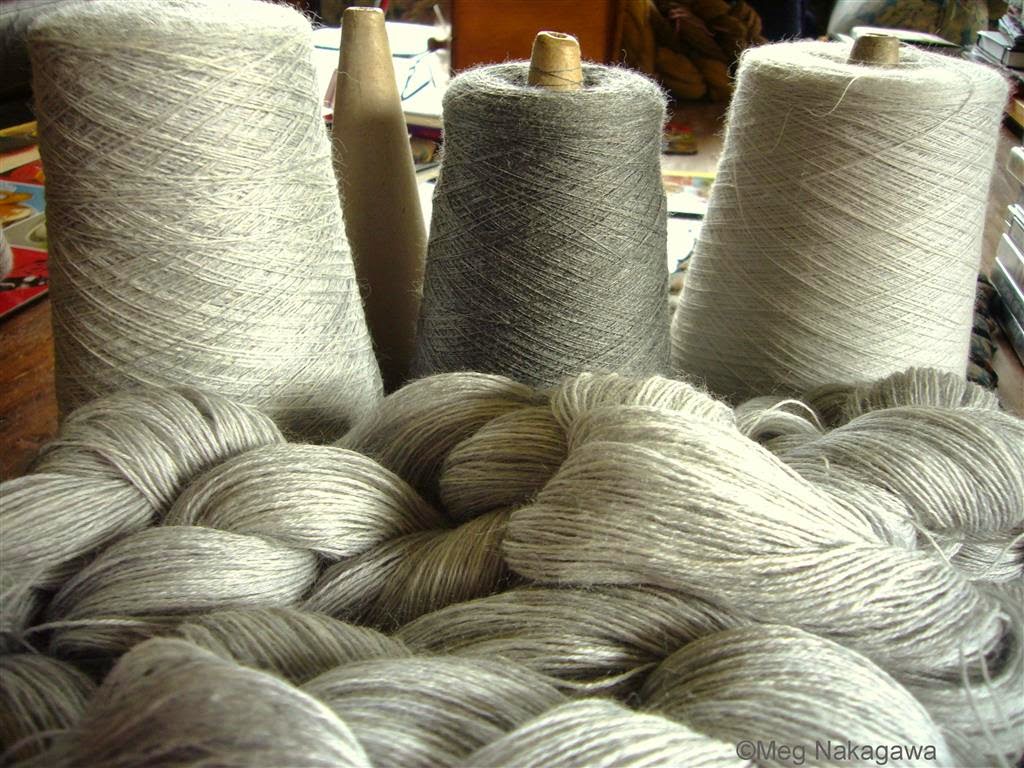 I made a luxurious 2/28 gray merino (left) warp with plenty of scope for sampling; I'm ready to resley but hoping to avoid rethreading. I would have liked a thicker warp yarn, but this is such a lovely yarn and the proportion of the dark bits in the lighter gray is so similar to the pillar warp I was mesmerized. Halfway through I wondered if I should have doubled the yarn, but never mind. For the weft top two candidates are a shiny darker gray in 1/30 (middle) and a dull lighter gray in 1/25 (right), plus whatever in the big silk box in the stash room. This warp will create a thin delicate piece of cloth with relatively narrow pleats. 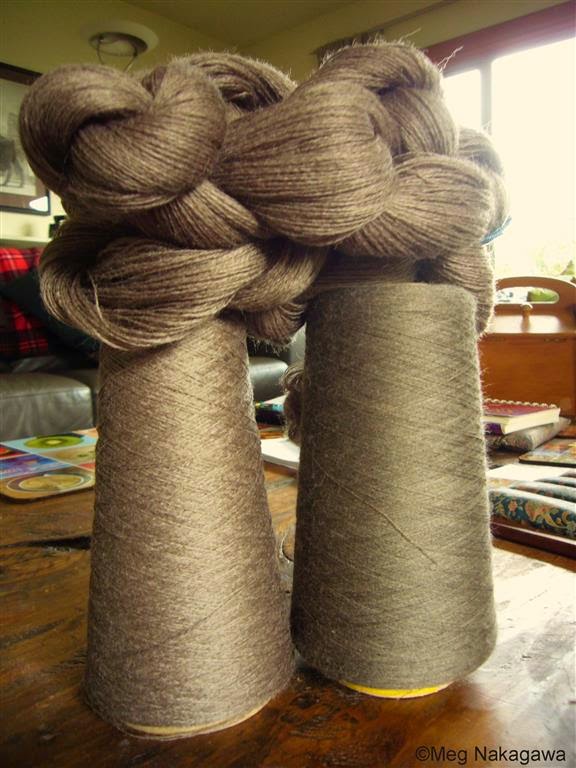 I have 200g of this 2/16 brown wool (left), so this is a shorter warp for my multiply-aforementioned mate who got me started on the pleat experiment; he wanted a creamy scarf, but I hope I'll be forgiven for this absolutely delicious mocha brown. I'm not a brown person, but this is my most favorite brown. First candidate for the weft is a slightly darker, shiner brown in 1/30 (right), This will be a plumper piece with wider pleats, but probably not as chunky as he would have liked. Again, subject to sampling.

I know making warps don't immediately equate to stash reduction, but I've finally been able to dip into my special stash. I don't have a steady source of good merino finer than what we call 110/2, which is roughly 2/17-2/18, so these are special.

And that's how far I got yesterday. Well! Today is a whole other story.

First thing I woke up thinking was I weave 110/2 warps in twill at 18EPI, so for pleating, shouldn't the gray 2/28 be sett closer than 28-30EPI? There are so many unknowns; I've never used the gray yarn in question; I've never woven pleats; and further down the track, I have no idea what kind of weft would produce the best results. I sample a lot, but long ago I learned small samples on a different loom doesn't yield accurate pictures of the final fulling, so I usually sample on the same loom as the project, same weft candidates plus anything I fancy, and the same/similar structure. But in this case, I am so clueless I decided to follow Dot's advice and try 28, 32 and perhaps 36EPI on a card. As I said, I don't mind resleying, but I do mind ending up with terribly skinny pieces, so it'll be worth it. 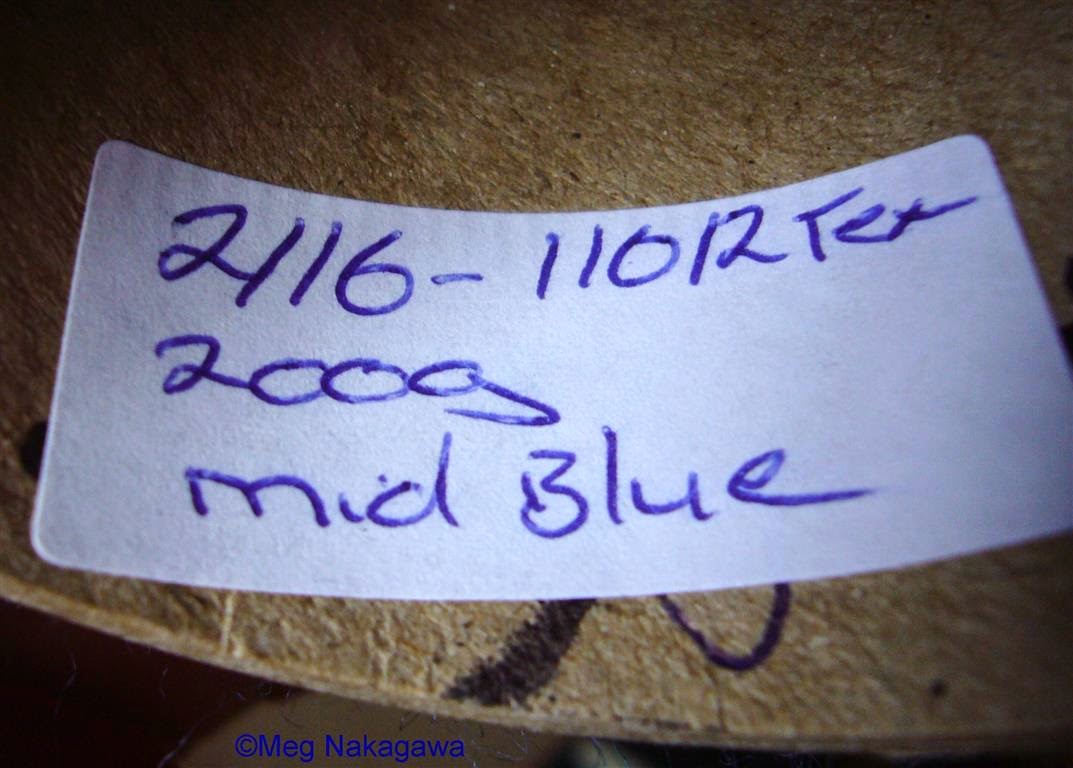 Yikes! After the two warps were made, I was putting away some cones that didn't make the cut this time, and saw that my yarn source considers 110/2 to be roughly 2/16, which means the brown may not pleat well at 21EPI. Oh, never mind, I made a wide warp for this, so it can stand to loose a bit in a closer sett; I'll handle this one on the big loom. 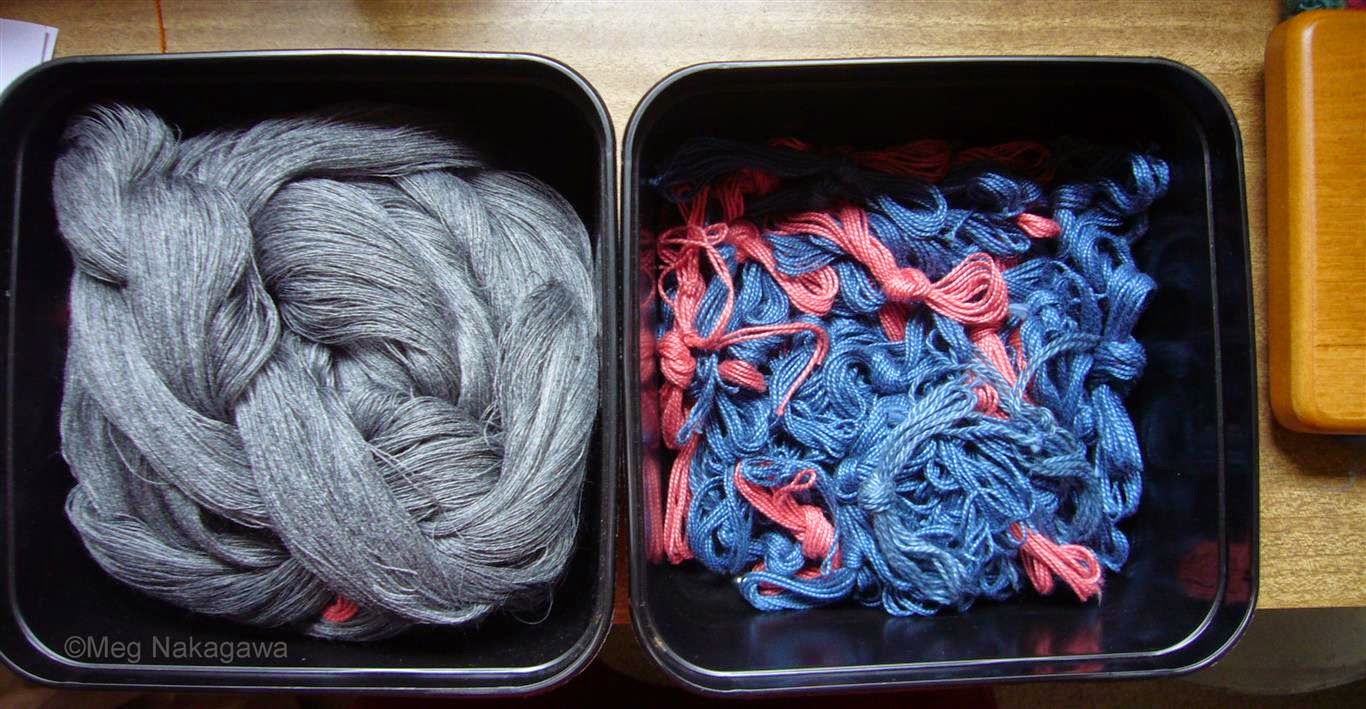 For about 10 hours, my wee CD/DVD container of 20/2 cotton ties went AWAL. It wasn't a big deal, I have plenty more of these, but it was so odd because this is something that either sits on top of the stairs as I make warps, or at the back of the loom as I wind warps, untying ties from the warp chain and temporary securing sticks and raddles. For ages it was always in a translucent cylindrical case, the lid of the 100 pack of CD/DVDs, you know. Instead, I found a mystery gray yarn with very little information on it.

In the afternoon I tiptoed downstairs; I was almost afraid of what else I might find, or find missing.

I remembered the gray is the same as the darker weft candidate, and I wanted to recreate the earring look in Triona's scarf in slinkier colors and textures, possibly with silk wefts. And the ties, well who put them in the ice cream containers? These containers are usually reserved for bobbins, pirns and leftover wefts. And who ever put them right next to the bobbin winder? Because, like, I have absolutely no recollection of either event.
Posted by Meg at 10/08/2014 05:08:00 PM