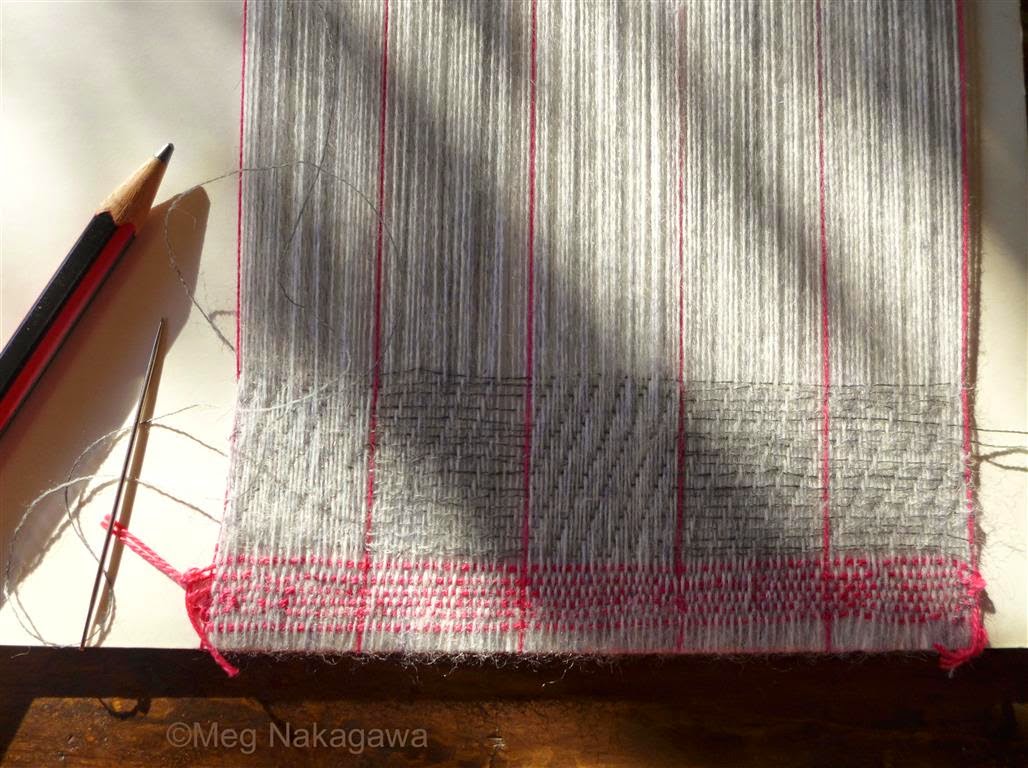 I probably should have added a couple of zillion extra ends and just played with the sett on the big loom, but I didn't think of it until I started. There is so much draw-in especially on the left; I keep forgetting to use the pink threads as floating selvedge, and I've half a bazillion weaving mistakes, but here I am, sampling 32EPI, 36EPI and 30EPI in approximately 1/5 and 5/1 twill.

The warp is dustier than I expected, but not too fragile.

The choice of needle was crucial here; too skinny and it went right through the warp yarns, too fat and it was hard to pick up the right end, so this one is the best compromise.

We went to the garden center today to get, among others, weed killers. My organic weed killer and, gulp, a Monsanto product have not worked on the two most insidious in our place, ivy and another vine that likes to come up from the middle of other plants. The man in the garden center who has been working there for 10 day and an older gentleman who looked like a keen, experienced gardener, told me Monsanto's is not strong enough, and recommended me another one. Luckily this Kiwicare product comes both in concentrate for spraying and gel for painting, so I got the latter.

For three weeks we had either "Dorothy, Wake up!" kind of gusts or quite heavy rain or both; since yesterday we have had neither and I'm requiring a quiet adjustment period. I think we have passed the early spring and now into middle of spring.

I overheard at the garden center, also, that there are bird deterrent products. I might get some because the English Black Birds are so hungry they are digging up quite large plants, too, so even less of a chance for the younger plants to settle in.