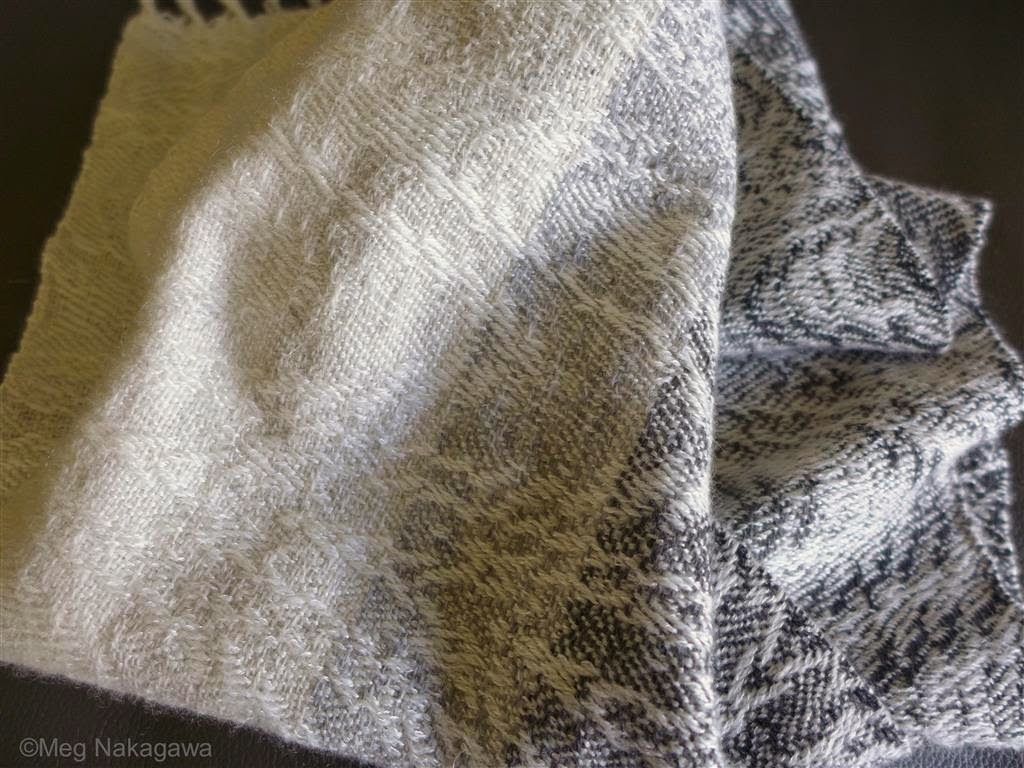 I never name warp-end stuff I might wear or cut up and make something out of, but here it is. "Lament", because I couldn't make a gift to a deserving friend, and I lament the passing of his mother and my dad which happened at around the same time. It's 121cm plus fringes. I'm glad I didn't stick to my guns and weave the requisite 170-180cm because this piece is loaded with problems. Plus I'm trying out loose/soft fringes to go with the cashmere but these were too loose. Plus I didn't have very hot hot water while washing. Perhaps I should call it "Murphy's Scarf".

I do like the cashmere/silk weft on different grays, but particularly where there's contrast in sheen at the lighter end. At 18EPI, the hand is rather delicious. And Ben likes the draft. It's all wrinkled because Ben's been wearing it this morning. No weaver is going to be allowed near it, though.

This shows about one-thirds of the draft, but it changes very slightly. This five-(not six)-gray warp was supposed to make two gifts. Below was the plan for a Thank You gift to my sparky, (electrician,) for helping me with the big pillar install over two years ago; I was going to use an icy pale blue in the weft. This shows about a quarter of the draft, but it too only changes slightly.

I think these drafts will be resurrected; as you can see they are similar but I tried to convey different moods. And I have another friend whose mother passed last year, but he's more a cotton-in-all-brilliant-colors kinda guy. At least none of them knows I am making anything for them.

The threading mistake in this warp, now on Jack, is corrected. If it were wool, I would have cut off the bad bits, but because it is the expensive cashmere, I unpicked, rethreaded, resleyed, and changed the design a bit. The weft is still the white silk mix.
Posted by Meg at 11/02/2014 12:24:00 PM