We had our house exterior washed yesterday; it's a once-in-several-years treat, but wonderful when we have it done. Our guy is skilled and knowledgeable, but he's going to retire from this business at the end of the year as he's weary of going up folks' roofs. Fair enough; he'll be missed.

Well, not just yet, because this year we're getting his mate to touch up the exterior paintwork. (Do please ring me back today!) We needed it in 2004 after we got double-glazed windows and receive quite a bit of damage. (But we were lucky; window guys defrauded so many in Nelson; we had a payment plan so the finance company had to get us windows. I didn't have head space for damaged exterior then, and we didn't have any money leftover.) Mr House Wash is coming back to do the windows after the paint dries.

After Ben went to Japan once and I twice in 2013, and I to Oz in 2014, we haven't traveled, which is why we can afford "routine" maintenance this year; so far we had tree cutters, two loads of skip, (3rd to come later I hope,) a new vacuum cleaner, and house wash and paint.

I love that my house is ever-so-slowly getting tidier. Of course I'd love it more if one day I woke up to a tidied/washed/polished/repaired house. Still, the eight years I had mild-to-moderate depression, I had stuff "temporarily stored" everywhere in plain sight because I just couldn't think of what to do with them. Since late 2011-ish, (it wasn't like a cold so I only knew months/years later I'd been over MTMD a while,) I've been overwhelmed by what's needed for the house to recover as well. Only these last few weeks/months, from a distance, I see that though there's still a very long way ahead, effort has been put in the right areas.

I never imagined the top-loader-vs-front-loader issue to be such an ethical conundrum. I know I'm a top-loader user; I stop and go all the time, and use the spin cycle on its own often. But 1) the one I have still works and I hate throwing out things when they work, (but we need a new one before, say, Feb; see below;) 2) I feel so guilty about throwing things out in general; I can't help "seeing" mountains of First World rubbish in Asia, although my washing machine will probably go into landfill in Nelson; and 3) this is the big one; I know a front-loader uses a fraction of the water of a top-loader. Guilt, guilt, guilt.

Besides, I may already have used up mula for routines/extras this year. (And our total asset is, I heard on the radio last week, something like 1/10 or 1/20 of what folks our age should have to live comfortably in our retirement.) But we need the new washing machine by around Feb because I'm likely to go home then, and I'd hate for Ben to be stuck with a broken one while I'm away.

I love February in Yokohama because it's so cold, but not crazy like Minnesota. By then I'll have been away from Japan for two and a half years. But wait, there's more. The main reason is Mom decided she and her two students are going to have a wee exhibition around then. It's her first not as a member of a large class buy as the main weaver, and a first for her students. I'd like to help with making a story/structure from a disparate collection of work, samples, and whatever else they have; make up presentable blurbs, small posters/invites, and suggest how to hang their work. I understand it's going to be a tiny exhibition in a tiny space, but still, a big step forward. And good on Mom at the ripe young age of 85.

But no congrats just yet. Look, every time we Skype, she cackles about "my" stash. I keep telling her I can handle most yarns I bought, because they are large amount of the same, mostly-skinny, yarns in different colors, and colors often go with other groups of my yarns. I know how to use them. Mom's, however, are all over, in different amounts/fibers/colors/sizes/shapes; so many greens and browns which even she doesn't use, and, oh, so much bouclé. You'd think she'd be appreciative I've lightened her load!

OK, now you can congratulate her, please. She'd love it, although she can't reply. 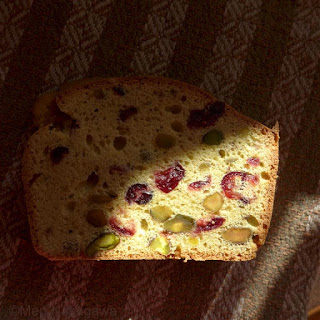 I made a pistachio/ginger/cranberry loaf. With about twice as much nuts/fruits and sugar, it's a biscotti recipe, to be sliced and baked a second time. But we like the between-cake-and-cookie texture after the first bake, so I use the skinnier bread pan, fewer nuts/fruits and less than half the sugar. (Yesterday I mixed vanilla sugar with maple syrup.) I've been making a variations about every ten days. Ben likes raw pistachio, I like almond or golden raisins, but always with quite a lot of grated ginger. Healthier and more flavorful than store-bought bickies and we eat less of it. (I took the pic in a hurry when I sliced a piece for Ben's lunch. You get the picture. :-P)

Ben finishes the work year in 22 days, then has 24 days of break. His work is making staff take more of the annual leave at Christmas/New Year time, which works for us and Ben's taken extra. Anyway, to saturate ourselves in the summer holiday mode, I'm hoping to get tax return out of the way. I got started while the house was being washed. But for now, outside duty beckons.
Posted by Meg at 11/26/2015 10:01:00 AM