The Good, the Bad, and the Loopy

In the weeks passed:

Ben had the worst cold in the 28 years I've known him. That's right, during the few days he took off so we can put in our last ditch effort outside before the full-on summer. But when an adult husband has 38.4C fever, off and on over three days, all I could do was to be the dutiful wife/nurse and be decisive. He's all better now, and met a wonderful doctor, but when diabetes is involved, in a year he had four doses of antibiotics from the dentist, I couldn't help imagining bad things, so I, too, stayed in the bedroom most of the week and read a lot.

We worked outside for five hours last Sunday in the Nelson sun, which "burned" my eyes. I was useless for the better part of last week. Some days the sun was so strong, (although our windows are tinted,) I kept some curtains closed from early in the morning. And related or not, I couldn't sleep. But the week turned out to be freeing; I released myself from the daily weed-or-weave circus and let my mind wander.

I read a lot; I'm having a rare reading-and-absorbing binge. I cooked a fair bit with some success, the simplest being the nicest. I made "anko", sweet azuki, (or adzuki to you,) paste which is a standard in Japanese dessert, like powdered sugar+chocolate+vanilla+lemon+cinnamon+rose water, and it was a hit with Ben. But what I liked the best was mashed cannelloni; super easy but slightly more time-consuming as the beans need overnight soaking. I must fine-tune the salt and butter because I used more than intended to make it taste like regular mashed potatoes. The bean-cooking water alone is nowhere near as fatty as spuds+butter, and I had no milk.

This weekend was too sunny/windy/forecast-to-rain, (I can't remember which excuse I was going to use; all are true but none bad enough to not garden,) which turned out to be the right thing. Unbeknownst to us, the hot water heater is on the fritz and had we gone outside, we would have had to suffer cold showers afterwards. So the next big purchase may not be the washing machine, but Dear Deity, either way, not in the same month we had to renew our house/contents/cars insurance.

Meanwhile I finished the orange warp, made what was supposed to be a pansy/viola-inspired warp but ended up all over the show as I kept changing the colors and the order, and destroyed the initial plan's harmony. I feared it may be scary-ugly, but with the right wefts it could work. Both will be made into all-over, draft-centric cloths, I think. 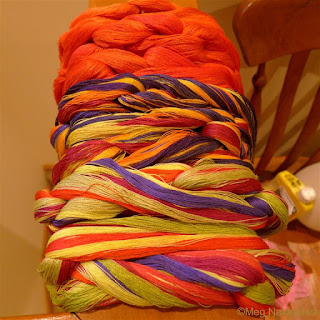 (The orange warp is much more varied and saturated and... better. The chain in the front is "whiter" than in real life. Everything is less... pink.) 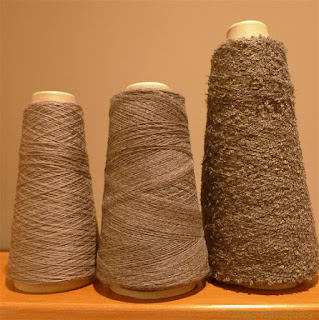 (They're a little darker and less as shiny, and less pink.)

By far the most fruitful in the last fortnight was stash room clean up. I had been itching to work with paper/paint/collages, but the stash room was never put back into its normal state after the April/May visitors, and paper-related materials were in disarray. The room was much too cold in the winter to contemplate cleaning, I've been outside most of the time, and everything I need for weaving was accessible, so staying with stash-busting and reorganizing/cleaning later made more sense. Except the busting wasn't happening with me outside so much. (Did I weave around 12 pieces between January and March, from memory, but three more since?)

This video of Holly Berry was making the rounds on Facebook; her weaving is fresh and attractive and graphic, possibly the direction I want to go, but I was ever so drawn to her sketchbook, I kept "rewinding" and watching that part. I know it would be far too onerous for me to compile presentable sketchbooks/visual diary pages and weave, (and weed), but I loved the possibility of working like that, and I had the urge to free up some space. 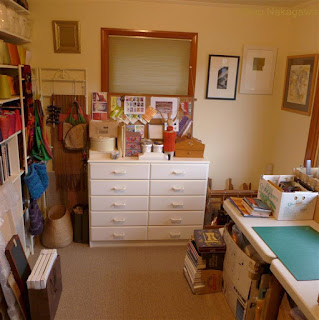 It wasn't a thorough clean up, I didn't touch the book for one, but I produced six shopping-bags-full of yarns/fabric/art supplies to donate and everything has been returned to where they should be. Just imagine, if I do set foot in the sketchbook/visual-diary realm, at least for the duration I no longer need to upend/search rubbish bags/wastepaper baskets/wood burner looking for that tiny receipt or envelope on the back of which I jotted down a crucial number!. Although, if the electrician wants to go up the roof cavity to check for rodent-damage to the hot water heater tomorrow, the room will be filled with the contents of our linen closet.

Same people made two other weaving videos, which are wonderful in that the three weavers are different from each other; here are Charlotte Grierson's and Helen Foot's.

Still, life is good. I need to keep reminding myself much of Nov-Feb is often too sunny for my eyes most summers. I can play with paper if I want to. And I can keep weaving for, oh, the next 10 years without needing to buy more yarn at this rate. Or reading. And playing with paper for at least three. And my husband is alright. What more can I ask for?
Posted by Meg at 11/08/2015 07:43:00 PM