I do OK growing things from seeds and bulbs, not so with tubers. I like propagating from plants we already have, and fruits/herbs we buy to eat. I'm also pretty good with weeding, transplanting, and ruthless pruning, but not so with completely getting rid of weeds because I'll spray once or twice but not until they really die, because I don't like chemicals. So they always come back with vengeance; at our place they are stronger than 30cm of mulching.

What I've learned in the last few years is it's the putting-together-nicely of plants I'm bad at. Lining up in a straight line in equidistance highlights any member being larger/smaller than others or dying, as do grids. Colors, heights, seasons, shapes, sizes, speed being elements of design, I research with gusto before/when I buy, but descriptions/photos almost never match reality. Or I forget or change my mind. So it's a hit or miss at our place.

Now I'm learning how gardening is an ongoing thing, not only because the unwanted always survive and the wanted sometimes not, but because it takes editing to bring to life ideas we might have in our heads. (Unless of course you are more experienced and knowledgeable than I, or have better gardening common sense, which is very probably.) Moving countries present additional hurdles, as do climate change and less predictable seasons. 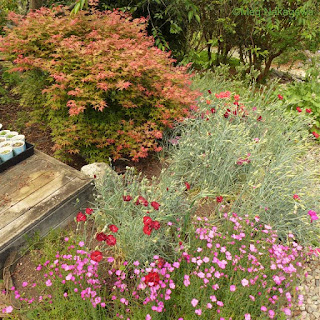 Take my former thyme patch in the middle of our garden. I made a lovely thyme patch in 1998 but it soon became cats central and I got sick of removing their deposits always from always smack in the center of the plants and anyway we couldn't use them in cooking. A couple of years ago I turned it into carnation/dianthus patch. (Cats tried the same, but sticks in the center of the plants, which didn't always work with thyme, worked with the harder stems.) I managed planting in a random pattern, but they refused to grow uniformly so I bought more seeds and seedlings to fill in gaps, and they came out in different sizes and colors. (Also confusing is some garden shops calling carnations "dianthus".) The worst offender here isn't even a dianthus but something from our pot that used to flower not-this-pink.

And you know, this bugs me. You are allowed to laugh, but I would prefer all to be the taller, pale-leafed, pale-stemmed kind in different colors.

But that's the lesser of the evil. We have too many shocking pink ones. (These pictures were taken on an overcast Saturday, so don't look half as shocking as they are in real life.)

When our house was built in 1961-ish, the first exterior color was pink, and much of what was planted in the garden were pink, many in the violently loud variety. (Also, the soil is acid.) Over the years we've taken out the worst offenders, and we really don't need more. Here is my lesson: either edit, or learn to like it, and I'm leaning so far towards editing I'm horizontal. 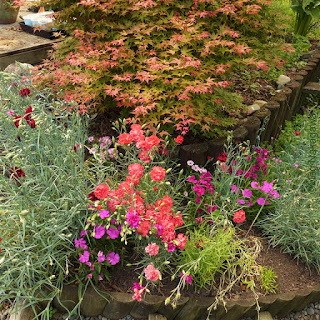 There are more down the slope, in various degrees of offensiveness, among them the one looking almost orange; it's not nice at all, the sort of flat, white-orange-pink. However, this is the "learn to like it" part; it goes well with the maple above, a strange one where the new leaves come out burning red and over the summer gradually turn green.  I'm still hoping the seeds I put in, of the favorable carnation, will come out later so I can pull out the offenders and give them away or move them to less central positions, although there is always that minute chance my taste/preference will change.

I spent some of the weekend weaving the cashmere piece on Klik. It's going very slow and I need to check and mend extra-vigilantly afterwards, but when it's done, it's going to be a lovely piece if I may say so myself.
Posted by Meg at 11/15/2015 06:41:00 PM