I can't remember at what stage my loom was at when I last posted, except that it wasn't going mere hours after Ben fixed it. I had to take a break from worrying as I was overwhelmed by questions and advices, while wondering if I was going to face an existential crisis as a weaver. (I wasn't there.) Fear no more, Ben fixed it again this morning, and though I dreaded to try it for most of the day, I managed to weave in the end. 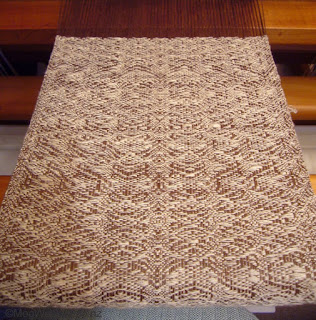 But before this, I sampled and didn't like the threading on the left end, so I edited it twice. The end result looks way too symmetrical for a piece I threaded spontaneously; (it's not symmetrical); maybe I need to plan spontaneity on paper, although I might try this again. It's a little thrilling. 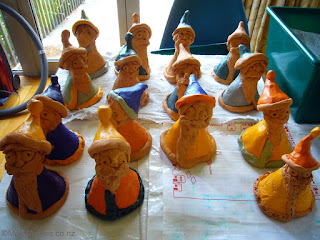 During the week, I painted Santas; 3D coloring, and I can't stay inside the lines. All that remain to paint are the beards and hairs, then let dry and spray a clear coat. I'm going to leave their faces as they are. These guys are taking far more time than I expected but they have been such good company. I also wove 35cm on the clasped weft piece; doodled more abstracts; started knitting another beanie; mended a few things; and set out to make Ben's Tardis PJ bottom. 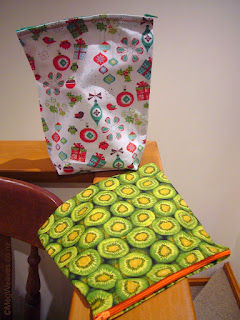 Instead, I practiced sewing by making two bags, (3D modelling!); I actually made one; wasn't too impressed; made another; really liked it; took the first one apart and reworked it. Again, I'm making these up as I go, and I could make life easier for myself if I followed instructions or at least planned ahead, but we'll see how I get on. These aren't big; I randomly bought four 20cm zippers so you get the idea. 25cm zippers looked so long in the stores but 30cm or even longer may be more practical for bags to use in sorting things inside suitcases. My sewing skills, however, has, oh, so much room for improvement.

I am ready to get back in to Letter Journals, and about time, too. I probably broke all kinds of rules not working on them promptly, but I was LJed out before I went to Japan; I did work on two while there, and carried several around the South Island, but more than that I hate to work half-heartedly. So I piled them up on the coffee table and felt guilty every evening. I don't expect to participate as robustly as I did last year but want to stay in. But first, I need to clear the bottle neck right here.

You know we had drought conditions earlier in spite of rain forecast time and time again; I quickly got used to saving water at least for our pots and was amazed appalled how much water we waste during the course of a normal day.  And that's not even saving laundry or bath water. We bought a big bucket and I save the upstairs shower water before it's warm enough to stand under; that alone is enough to water the pots every two or three days. Then suddenly we've had quite heavy rain for days and now I don't know what to do with my dish water, let alone the clean shower water! Oh, dear.
Posted by Meg at 1/13/2018 11:19:00 PM