Yesterday was Ben's first day back to work and I wanted to start my work year on a high note. I rethreaded roughly one-fifth of the left end of the brown warp, thought the hand-spun is the right choice for this piece, and powered up the... the... nope, the computer couldn't be turned on. I had Ben take a look in the evening and long-story-short we shall be replacing the computer, (and with it possibly the monitor.)

Sure, I'm disappointed, because behind all these troubles is the foreboding there may will come a day I won't be able to get this 16-shaft going, and would that mean the end to my weaving as I think it; but for now, phew, all these repairs have been super cheap because we're in need of really old parts; if we can find them, they don't cost much. 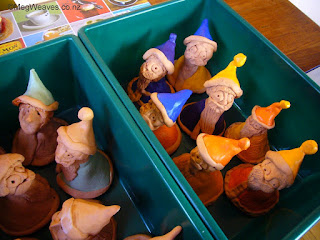 I started painting some of my santas with aforementioned test posts. I was taken aback most of the colors are so bright these fellows look a lot more chipper and... younger than I had expected, but that's OK, they're going  to have to sit among plants, bought and otherwise, so I'll be able to see them better this way. 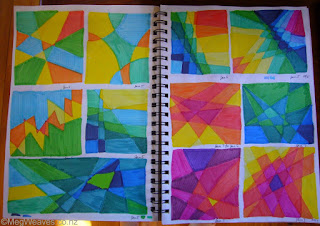 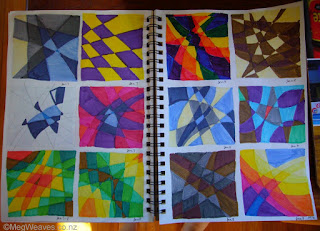 I also worked on my annual project, which is going smoothly. So far I've stuck to the small size and ink pens, as I've become interested in shapes created by random lines traversing from one edge of the rectangle to another. These go faster and more mindlessly than the faces, although I keep thinking they look like quilts.

Mom's been looking for ways to spruce up her creative process and her teaching; over the years I've given her gazillion advices in words and material but I don't think she'd looked into any seriously, which frustrated me to no end. Last week during our weekly Skype, when Mom finally started taking notes, (really, pencil on paper!) Ben suggested we do it together over Skype, and we did.

Yesterday Mom collaged for the first time ever, as far as she can remember, and for someone who tires easily, she did super well working for 90 minutes. I'm very proud of her. At the start she had a lot of newbie questions, (even though we had discussed we're doing this to forfeit controls/plans, we're letting the collage itself take its own course, etc,) but after a while she started concentrating on the doing, and the few times I asked how she was going, she gave me various iterations of, "just doing as I'm told." LOL. I got that she got it, though, when she quickly remarked how collage would be good in therapy. 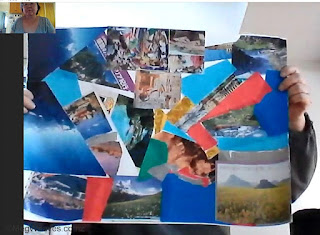 This is her first ever collage, which looks good considering her table was smaller than her base paper. Because her base was big she quickly started to obsess about hiding all the base, although I said once or twice she didn't have to hide them all, I tried as hard as I can not to tell her stuff. Later we compared how the white triangle in lower center-left was more annoying than upper-left. She also agreed it was more fun working big than trying to fit things conveniently. Phew.

We discussed various options/directions she could build this up. She didn't say enjoyed this experience, but I suspect she enjoyed tearing paper with her hands, and she was pretty quick to place images in different directions. She also saw me working standing up and turning my paper in all orientations while I worked. Mama is such a doer, not a thinker, and I should have started working together on skype long time ago! 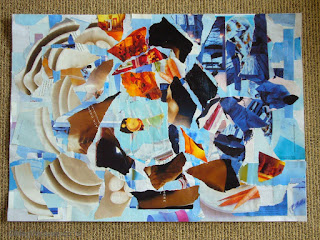 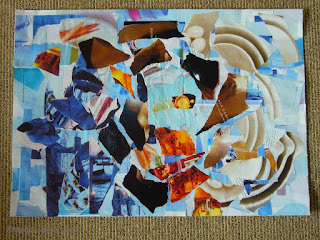 This is mine. I can't decide which way I like better; I was very pleased when Mom asked to see a simpler example not only up and down but also sideways, in both orientation. Because I am naturally a control freak, I enjoy switching to don't-think-just-do mode. We discussed how this can happen, (gazillion collages?) but mixing natural progression with some intention/control is not bad/wrong, as long as we don't let the intention/control take over until (much) later. She also said she got the wrong material to collage, and this is a complaint I used to make early on, but I'm in two minds about it now. I think I have more of a good day vs bad. What say you??

But observe how she used red vs me, orange; family resemblance, much?

Next week we're going to do some quick/blind drawings. The reason why I'm pretty sure she enjoyed yesterday is because when I said we'll be drawing next wee, she didn't kick up a fuss. I think she is starting to understand what I call, "irresponsible" making; fingers crossed.
Posted by Meg at 1/09/2018 10:37:00 AM