I've finished the second piece on the cashmere warp, (no pic as I started the next one immediately,) but I'm not crazy about it at the moment; let's agree to suspend judgement until I finish the third, last piece and can have a better look at both. With no plans/intentions, the first one worked surprisingly well; this is what makes the second one... ick. I haven't woven on the big loom. 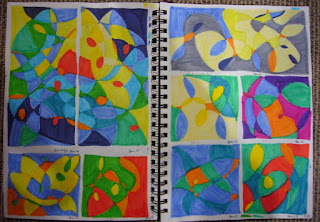 I've done more abstracts, moving into curvy lines. I've been interested in creating movement through color placement and/or shape sizes. This pic is strange because I started with the bottom right square on the right page and moved up, so the big two-parter was finished last.

I made Mom draw, even though she tried to sabotage by saying she's not "the drawing kind"; "let's talk about weaving," she said, so we did, which took two minutes. I spent three hours prepping that morning, so I wasn't going to let her off easily. Mom was surprisingly good at it; I'm not sure if she managed to never look at her paper, (I had to learn to draw blind because it felt physically unnatural at first,) but we did a bunch of blind contours from extremely short to 90 and 120 seconds using dad's photos, (turned sideways and upside down,) and each other's face on the screen. We both tried really hard to draw slowly but we do tend to cruise along. We talked about seeing/imagining rather than aiming for realistic/traditional drawings, and how our drawings were not ends but merely means. And experimenting. I know she even enjoyed it as I managed to keep her on Skype for 90 minutes. 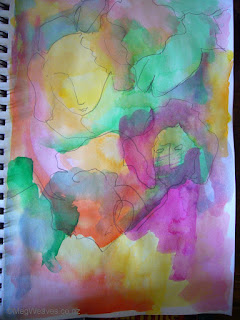 I didn't screen-capture what she did, but I also showed her how I put down colors and find faces, like I do on postcards. Next week colors with watercolor pencils. 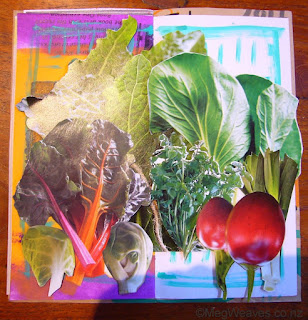 In two days, I managed to work on four LJs to forward. This is from today; I arranged a vegetable forest on the spread, shot it, then glued the veggies looking at the screen, and later drew Little Red Riding Hood and a wolf. Today's LJ work took up the whole day, which is why I didn't get to the loom.
Posted by Meg at 1/17/2018 08:35:00 PM