I haven't done this in a while, but today turned out to be a two-post day.

I went downstairs and threaded the last 100 ends, like I said I would, sleyed at 24EPI on a 6DPI reed, and put weights on groups of 24 ends at the front of the reed. Usually I lift shafts at this point at this point to separate the ends, even out the tension, and to see if any have crossed behind the reed, before I bunch them and lash on to the cloth beam. (And already I was thinking about the next post, telling you how much I love to weave twill on my big loom.)

I turned the air compressor, the black box, the monitor and the desktop, (remember those?) and waited, and the computer asked for a Windows disk, so I restarted the computer, twice, and arrived at the usual Windows screen, went into the conversion program, and nothing lifted!

If you've been around Unravelling long enough, you know that my 16-shaft is a NZ (Thorp) countermarche, retrofitted by the loom maker Mr Thorp to computer-controlled 16, but I use an additional conversion software written by one Mr Graham, son of a Blenheim weaver, which can translate any wif to shaft movement, to be fed into to Mr Thorp's black box. So although somewhere in the hard drive I have the program Mr Thorp wrote, into which the weaver has to manually input every move, I've never used it.

I am not the original owner of the loom/setup, don't know if I'm the second, but there are a few folks in New Zealand that has this, at least as was converted by Mr Thorp. And because both the hardware and software are old, (ancient,) and because I don't have the bits to revert this to countermarche, I've always been terrified of parts wearing out and new ones being unavailable, both software and hardware. On the other hand, the more I used the loom the fewer problem it presented, and the last heartstopping moment occurred more than seven years ago so I could not imagine today would be D Day.

So I called the resident IT department/gadget man, and he started sighing really loudly instead of giving me instants solution like he usually does.

This is my understanding: the black box requires two printer ports, ergo an old desktop with Windows 98 or older; we need pure DOS, which is what we have. Today the desktop did not recognize the second printer port nor the CD ROM, so Ben stuck a portable reader for the second problem, (handy he has these at home,) and came up with a couple of possible scenarios: 1) the printer port card died; 2) the lithium battery on the motherboard died; 3) or something else more dire and costly, which is when I stopped seriously listening to him.

He's ordered the printer port card, which is due Jan 10. If that fails, we'll get a new-to-us old computer. He's mentioned a new black box, although that's hardly something one can get at the neighbourhood hardware store. If that fails, he's saying a purpose-built computer-controlled loom may be cheaper and easier than trying to fix this one. As if we could afford such a thing.

So tonight, I'm going to wallow in self-pity, drown my sorrow in Ben's good whiskey, and contemplate the possible inevitable. 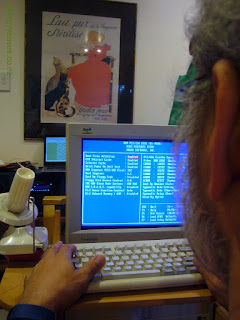 Didn't even look Greek to me. 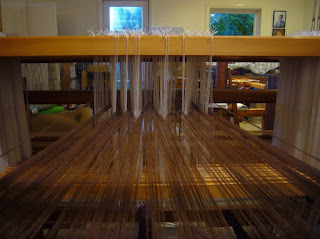 And these babies will have to wait a while.

But seriously, First World Problem, eh. I still have other looms; this only makes it tiresome to weave the kind of twills I like. But I'll still complain about the timing, just when I was getting back in action, feeling enthusiastic and behaving well!
Posted by Meg at 1/02/2018 10:17:00 PM