So, what did I learn at the workshop? I think control and planning make predictable but not necessarily interesting cloth, that I've not enough experience not to be experimenting more, and that I may find weaving more enjoyable in a different way if a bit of spontaneity came into play. Here are my samples to illustrate the point. (The colors on these photos do not represent the samples very well, unfortunately.) 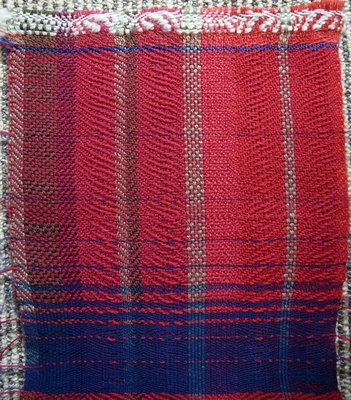 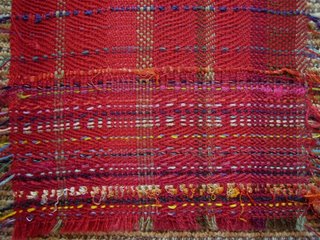 Sample 1b: on mine again, Randy instructed us to maintain the visual proportion, but start introducing other colors and textures and aim to mix 100 colors. As you can see, I did weave a lot of red picks, but I was not exactly adventurous, and was afraid of introducing drastically different hues at first. In fact, I was totally frustrated. 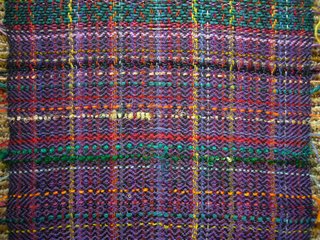 Sample 2: multi-color warp mostly in darker values. I started out resisting, in thin purple wool, by telling myself I needed to get used to the loom. However, I was also highlighting the paler colors, especially yellows and oranges, and also included some textures. When I ran out of the purple wool, I switched to a thicker green cotton, which made the cloth more bumpy/textured, and the cooler contrast less noticeable.

Although you can see that I am still counting, with the purple and green as main colors, I was less inhibited in introducing hues because many already existed in the warp. I like the inclusion of lavender, violet and olive green in the purple area. 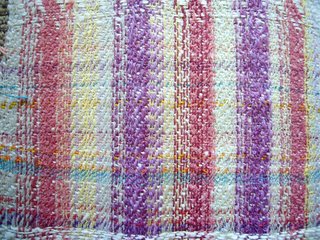 Sample 3: a textured warp. Because of the texture in the warp, and the type of weft yarns I had with me (smooth, thin wool and embroidery floss in various colors), I thought this is a test in how much I can show the weft yarns. In fact, I got braver and started to include intense yellows and oranges, as well as two powder blue-greens, although most other 'interjections' were hues similar to those found in the warp, but in different values. 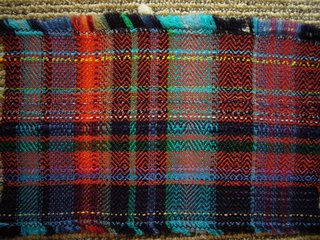 Sample 4: a warp with contrast in values. I found the wide range of values in this warp difficult, and chose an orange (a hue I seldom use) roughly equal in value in warp, to see what would happen. I did this because my natural instinct would have been to use navy as the main weft , which I tried only to get used to this loom. I was more interested in what would happen to the cloth value-wise, and was able to ignore the disharmony (to me) of the hues. Although the finished cloth does not reflect this, I was starting to think on my feet and foraging through my, and other weavers', stash for different yarns. 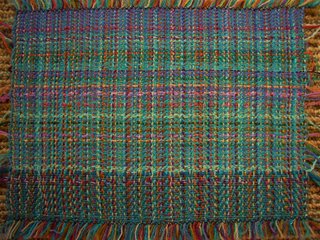 Sample 5: gentle blues and greens. I felt liberated weaving on this warp, because the colors are so different from what I normally choose, I had less preconceived ideas about what I should do. Although I did not know this at the time, I was no longer overly concerned with proportion, being more interested in the evenness of value, and consciously worked on the visual movement i.e. not introducing interesting colors amidst just one base cooler, but moving the viewer's eye. The variety of hues I introduced increased dramatically, and I also used glitter threads. 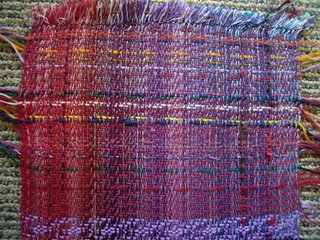 Sample 6: "I wished I warped this" warp. This says more about my preference; I liked all the colors on this warp at first glance, and looked forward to weaving on this loom, but found it difficult. I think it was partially because the value range is wide, partially because I 'know' these hues, and most probably because of the time of the day I reached this loom. Because the warp threads collectively looked very intense, I kept putting in more intense colors, e.g. many embroidery floss, but I carried on with trying to change the base cooler to move the eye, without making obvious stripes. The photo doesn't show this well, but the base colors changed in this sample as in the last one. 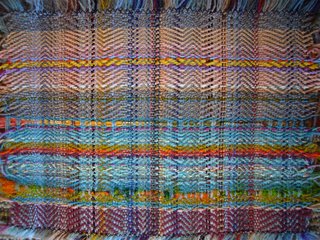 Sample 7: another gentle warp. I was finally starting to feel comfortable about going with the flow, not worrying too much about proportion or value, but just wanting to move the eye and avoid stripes. I was, however, starting to run out of some hue/value wefts, so my options were narrowing, and this proved to be a great exercise because I had to use more and more hues I normally would not touch (nor own). 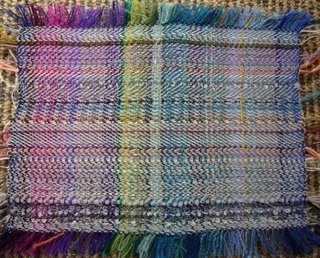 Sample 8: My Randy. By the time I arrived at this loom, I had some clue as to how I could transfer my ideas onto the cloth. We had just seen a series of Randy's silk scarves that morning, and I wanted to recreate the shimmer of silk using wool. I found a shiny acrylic (?) silver/brown/black thread in someone else's basket, so I wove one pick, followed by a dull gray yarn; so two yarns/picks to create one base color 'pick'. Because the warp threads were intense/saturated, for accent colors I used less intense, 'dirty' colors. I was very pleased with the overall look, and the added bonus was the owner of this warp liked it, too. 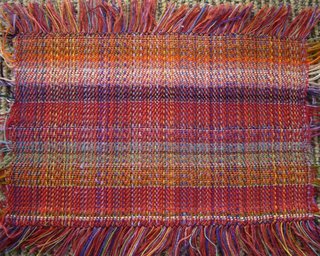 Sample 9: I am Randiette. By this time I was enjoying thinking on my feet, and was not worried about doing the wrong thing. Here, although I tried to avoid obvious stripes, I was more interested in the movement of the viewer's eye, and I did introduce more yarns than in almost any other sample. The interesting thing about this sample is that depending on the distance from which you view this sample, the stripes appear to be of different width and/or the border of the stripes move.

So what did I take home from the week? Well, actually it didn't occur to me until I analyzed these samples: Randy was spot on with his advice on the first day, that I cannot go to workshops looking for a magical formula to improve my weaving, but I need to be my own apprentice, weave more, and learn from experience how to use colors and what kind of cloth I want to weave. What makes him a great educator is he probably knew I would automatically reject his advice had he used words like "play" and "spontaneity", but I don't mind working long and hard, and what a romantic notion to be my own apprentice! That was my magic formula. So now it's time to get on my loom and weave.
Posted by Meg at 10/16/2006 11:12:00 AM