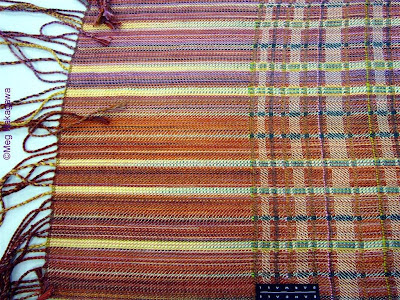 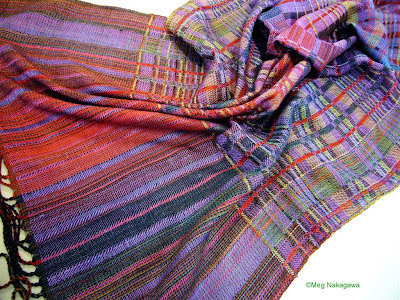 This is arguably the most important concept of the entire workshop, and in understanding Randall Darwall textiles, but today, I found nothing on this in my notebook, and no smashing photo to illustrate it. But I'll give it a try.

A few months before the workshop, Randy wrote to us explaining how he wanted us to prepare the warp to bring to the workshop, and in it he wrote: "Color: more is better. I often use the phrase 'why use five colors when fifty will do nicely.' Dynamic proportion is an important element here: try picking a base color and then adding smaller and smaller amounts of different colors to it."

At the time, and until I arrived at the workshop, I struggled with the concept, as I could only visualize a fat navy blue stripe next to a medium-width cyan stripe next to a skinny baby blue stripe. This isn't entirely wrong, but oversimplified. His concept is to use colors in nice proportion, but not in direct alignment. And to this end, the Fibonacci numbers could be a good tool. For example, I could weave a narrow scarf with 136 ends (warp threads) and six colors in the warp: to do this, I wind 55 ends of color A, 34 of B, 21 of C, 13 of D, 8 of E and 5 of F, but not necessarily in that order, and the numbers need not be exact, so I could even be whimsical and add 2 ends of color G and 1 of H. Likewise with the wefts when I weave.