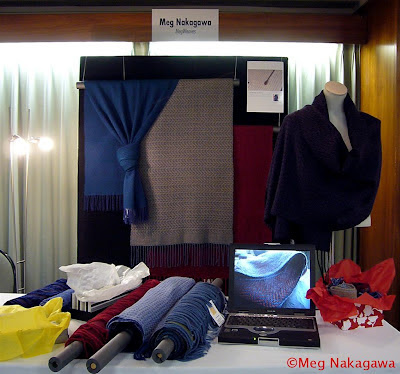 I got no deal. In fact, in the one and a half days there, I spoke to only two-and-a-half galleries; some gallerists didn't want anything to do with weaving, some didn't even want to make eye-contact with me. So, about an hour after we opened the venue, I was deep into Paranoia-land. Is it weaving in general, (I stuck to this line while talking to other artists); or is it my stuff, or my display, or me? My display looked dull compared to others, but unrolled the shawls ceremoniously to drape them over people each time. I was in a good position, between two successful jewelers and next to the water cooler, near the entrance, but that didn't help. 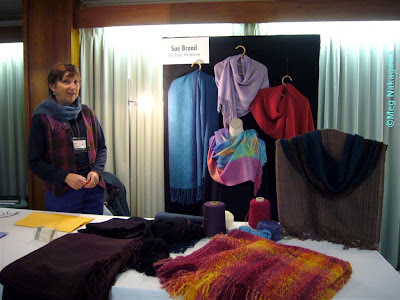 Sue did better; two out of four places she spoke to were interested in her pieces, and good on her! There was another weaver, also Sue, and I hear she's done very well; she's possibly one of the only two weavers in Nelson who make a living out of what they do, though, so no surprises there.

I ran into Tim Wraight the first night at the Expo dinner, and got to thinking this "no deal" might not be such a bad thing. In 2000, while setting my goals in conjunction with the Small Business marketing courses, I resolved, as a weaver, I wanted to bake cake, not bread, and everything I've been doing indicates that I'm heading that way. I mean no disrespect for what other weavers weave, but maybe mine's not a gallery/shop kind of stuff, (at least I'm sticking to this theory for now,) and thankfully, I don't have to make a living out of this. I'd just like to be able to finance the venture, though.

Oh, I did sell a cashmere piece to a smartly-dressed painter Kathy Reilly of Golden Bay. In fact, I've been buying her cards for a while now, and discovered she does a totally different type of drawings as well. In fact, it was wonderful to connect names/faces to the artworks; I've been familiar with so many of the artists' works for a while.
Posted by Meg at 6/05/2007 06:18:00 PM