The city of Napier was as pretty as ever; if anything, it had been prettied up even more since 1996. Napier has attractive fashion, design and antique (with an emphasis on Art Deco, of course) stores, many charming cafes where food is scrumptious, and possibly the best natural food store in New Zealand. 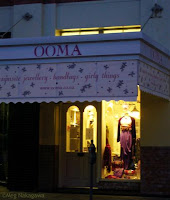 The aptly-named Objects of My Affection 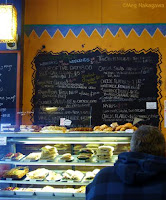 Cafe Ujazi, Tennyson Street
The Symposium itself was intriguing. As usual, I was bombarded by wonderful visuals, which was exciting, but I admit I didn't enjoy this year as much as others. The theme was "Empire", and there is a good reason Hawke's Bay Museum and Art Gallery director Douglas Lloyd-Jenkins chose this; last year he read a paper on the identity crisis evident in the way young Pakeha (European-descent) boys dress, and he wanted to continue along this line, he said.

The majority of the 20 papers, though unmistakably about textiles and costumes, pertained to the British Empire, emitting strong Kiwi Love-Vibes for The Mother Country, which I found suffocating. I can't explain, but can only liken the atmosphere to the slight but persistent stale smell of an older relative's home. Or as Dolly Parton eloquently explained in Nine to Five, "I felt like a bastard at a family reunion." I mean no offense to Kiwis who feel this Love, but the sentiment is more corporeal and demanding than the regular Anglophilia I knew in the US or Japan. Afterwards, though, Douglas commented on how the New Zealand attitudes have changed, citing the number of times and where the audience laughed or giggled during the presentations.

There were perhaps a couple of papers on other empires, and only two from the Maori perspective. As a citizen of a nation that still has an Emperor, I should have thrown in a paper on just about anything Japanese for variety's sake, but the other presenters are academics and curators for the most part, and I wouldn't have felt comfortable. Besides, I'm a "tourists" at these symposia, just looking in form the outside.

Administratively, the HBMAG staff did a cracker of a job. These symposia are run smoothly every time, but this year delegates were treated to goodie bags with special rosettes which entitled us to free entry to the rest of the museum during the weekend. As my present, I got a knitting pattern and a set of self-cover buttons; the latter was serendipitous because just minutes earlier, I was gazing through an antique shop window at a navy blue silk dress with tiny silk-covered buttons. 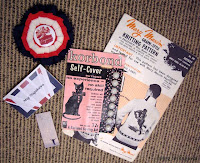 My Goodie Bag
After the official part of the program, we were treated to a patchwork of old film clips from New Zealand Film Archive, with live piano accompaniment. All clips related to fashion, but the most memorable piece was on manufacturing of nylon stockings in the 50's (?) which stated all workers, including Kiwi blokes, were manicured so as not to catch the fine threads!!

The whole country was going through (and still is) a severe cold spell. Some Napier members said it was the coldest in somewhere between two to 40 years (depending on the age of the speaker) in Napier. As a result, one of the other attraction of the symposia, of watching other delegates don their special garment or fashion, was a little disappointing, but I still managed find a few pieces where I had to ask if I could photograph.

I live in Nelson, which is a small city. And while I love living here, I miss the anonymity of big cities, and every year I've sat in the dark and contemplated textiles with the presentation running in the background the way grownups talk in the Peanuts cartoons. I work hard not to make friends. So you have got to see the humor in what happened this weekend; I had a German room mate.

I had booked a room to myself at the backpacker across the street from the museum months in advance. When I arrived, Owner Doug asked if I would mind sharing the room with another person coming to the conference, that I could halve my cost, though if I didn't, it wouldn't be a problem as there was plenty of rooms left. I didn't want to, but I have a hard time saying no, (I'm Japanese after all,) so I agreed. And so I met Christine Keller, of Hamburg, and now Academic Leader - Textiles, Otago Polytechnic, Dunedin.

I wasn't very friendly the first couple of days, but we ended up having dinner together the last night, giggled our way through Mamma Mia!, and talked textiles for more than a few hours on the last day. Christine is not only a professionally-trained, talented weaver/designer, but she also spent years in Canada studying Jacquard, has knowledge of exhibitions and contests in Europe, and is a natural mentor, even though she is, as she stated at one point, "much younger" than me. I was struck by the depth of her thoughts and encouraged by her opinion, and ended up promising to keep in touch. And so we will.

I must add, Christine was just as amused but more sympathetic to the Love. One of quite a few things we had in common was growing up in Post-WWII Germany/Japan, we both "learned" patriotism was undesirable except in specific contexts, and subtly discouraged, so neither of us feel the kind of Love towards our own countries. 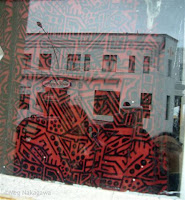