Ever since I made the gold warp a couple of days ago I've had a purple warp dangling in front of my mind's eye, to be woven in the style of my P2P piece; I had to make it and get it out of my head. Pre-made warps often return to take chunks out of my mind's behind, but at least this one can go on to either of the table looms right away, in between weaving the purple piece on the big loom. I've also been contemplating analogous Summer & Winter, but that's for another post. (And what's with Amazon delaying my XRX Summer & Winter book delivery time and time again? It's been pushed back and I'm now scheduled to receive it between after Christmas and February! I inquired and got a sincere apology, but no explanation.) 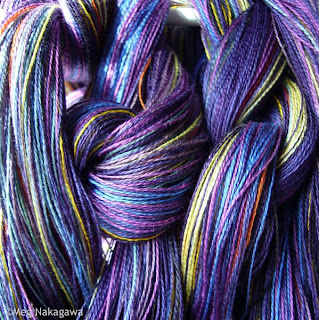 Making a warp like this is takes time; with breaks, this took me around four and a half hours for 288 ends. But it is a right-brain, self-indulgent, another-worldly time.  I need to be vigilant in cutting and tying threads as often as my patience can stand, because I like the frequent color changes in the warp; I also find two beautiful colors looking ugly next to each other and then I have to swap.

Looking at the P2P piece, I imagined I had far more 2/20 cottons than these, but this is the lot. Seeing this has been a good reminder that weaving is really not about the colors of individual yarns, but color interaction on the cloth.  And I used about 3/4 of these.

In my mind's eye, I look like this while I work. Seriously; shorter, not as pretty, and almost always in my PJs or old clothes. But, yes.

Here are sections of my P2P piece I was looking at the other night, which prompted me to make a mostly-purple warp. 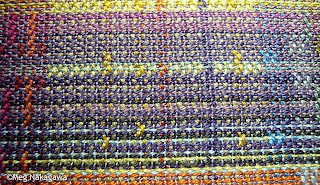 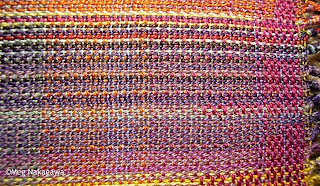 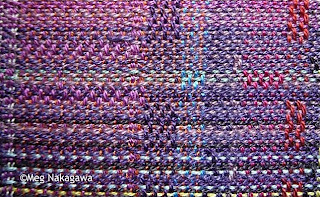 When I was weaving the P2P piece, from time to time when I wasn't struggling with the horrible tension, I felt I was getting closer to what The August One taught me. I made the warp spontaneously, (i.e. no plans but selecting colors and numbers on the spot; if you're new to my blog, you've no idea how uncharacteristic that is for me,) I threaded more or less randomly, I picked the pattern wefts spontaneously, (but not randomly, as I did observe the changes, the harmony, the contrasts,) but considered the effect of the tabby weft colors.  It was a most hedonistic experience in an unfamiliar way.

Which leads to an interesting thing that happened yesterday.

I have a sister who is seven years my junior; any which way you can compare us, we came out opposites, physically, emotionally, in our preferences and life experiences.  In fact for a long time she thought she was adopted because she was so different from our parents, our brother, or me.  For one thing she had such good teeth she went to the dentist for the first time when she was pregnant at 29, while the rest of us are goldmines for the industry.  Needless to say, we were never close.

For the last 14 years she's been a stay-at-home mother, though for the last few Mom felt she should engage in either employment or hobby to make room for her boys to do some growing up on their own; I thought she was becoming a martyr, not helping but causing some of the behavioral problems her older boy had.  But then I don't have kids, so it's easy for me to criticize.

She used to be a very interesting human being, athletic, funny in an understated way, which is unique in a family of four verbose others competing to be the funniest. She had tons of friends, and whatever she took up, tennis, any musical instrument into which one blows, knitting, Ikebana floral art, or French, she seemed to pick up quickly and become rather good painlessly.

Earlier this year, she started to go to a pottery class.  She claims she's only imitating examples at this stage, but having a mother who often shopped interesting practical pieces, and a mother-in-law who invested a husband's fortune collecting art and art studio pieces, Sister knows more about ceramics than she realizes.  Yesterday, for the first time, we had an invigorating discussion about "making".  Of particular interest to both of us were the spontaneity allowed in pottery, (in contrast to weaving; she is our mother's daughter, after all, so she knows the mechanics of weaving,) vs. the predictability one can build into a weaving practice, (i.e. extensive sampling,) vs. the accidental nature of what happens in a kiln.  Fascinating stuff.  We also talked about were we get inspirations, and also of "deceptive" work; she knows a potter who creates very thin pieces that sounds like metal, and I talked about some of my "gold" cotton and pale blue/teal pieces reflecting light like metal.  For the first time in a long, long time, I can't wait to talk to her again.

Speaking of colors, this is from the American NPR website, of tree barks.  I love these so much I wrote to them asking if I could print them out just so I can have them on my wall.  I don't want to steal, but perhaps they're not used to being asked, because I haven't heard back.
Posted by Meg at 10/27/2010 05:30:00 PM