A while ago I wrote about Japanese preference for Silver Ratio among other design-related preferences I read about. I remembered this last night, and wanted to use it; Ben said it's the square root of 2, so roughly 1.4, and I went off my merry way.

An hour and a half later, Ben apologized, saying it's in fact roughly 2.4, or 1+square-root-of-2. He was looking at English-language Wiki, where Silver Ratio is the latter, but Japanese Wiki cites both. No need to be able to read Japanese; I understood as much as you might, but the problem is, Ben couldn't find the distinction/definition for the two numbers.

It's not at all unheard of that Japanese translate Japanese terms and concepts into English, or other languages, using words which point to different terms and concepts in English, or other languages; we mean something different but use the words anyway. (I had an example in mind at 1AM this morning, but I can't remember now.) Or maybe there's more in math, but I cannot be bothered; I'm sticking with 1.4.

Why did I want to use this? I've been playing around with Ben's Happi jacket fabric. I bought some cotton cones, 3/12 according to their specs, in five denim colors; these were always going to be for Ben, and he's been asking for a Happi, so Happi it will be.

If you look at the two drafts below, which would you consider more Japanese-looking? Do they look different but neither more Japanese than the other? 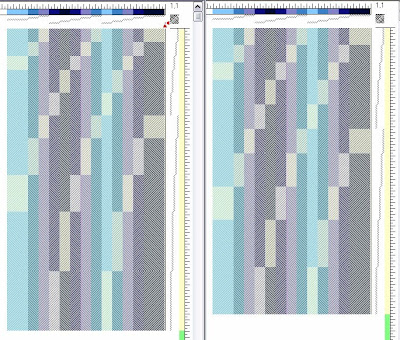 Ben and I were amazed at our absolutely preference for the right, a sample of rectangles being elongated using 1.4 vertically, whereas the left sample used Fibonacci sequence, which is roughly the Golden Ratio. We swapped positions of the printed drafts, looked at smaller portions of each, or in different orientations and from different angles, but we chose the Silver Ratio every time.