Yesterday was the last day of Figure Drawing Term I.  We had my favorite model; I almost think Ronette plans to have her every last day. This model is so not a black-line-on-black-paper figure, so I played a little using the side of a black crayon to get softer expressions; then white candle on white paper, where I can't see much until I apply the wash.  But I still wasn't as happy as last week.  So for the last piece, I used white oil stick, (with all kinds of gunk stuck on it, yellow, blue, whatever,) white crayon, black crayon, wash, and black oil stick, and though the proportion/placement is way off, (and I didn't even notice until I was packing up,) I finally got one piece I liked. 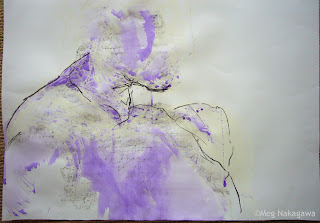 I'll miss the class but I'm really taking the next term off for a crazy-mad weaveathon, (weavefest? I can't decide on a name.) I've thought of doing this the last three terms, but every time I reneged at the last minute and promptly signed up for the following term, but this time I'm really off until August 4, if there isn't too big a waiting list for the Friday morning class.  If there is, I'll just sit tight and wait until there is a slot.  It's a little scary not having my weekly right brain massage, but I'm hoping I'll be too busy weaving these ideas in my head to notice.

Ronette commented I am "expressive", (to which I say, I can't do accurate lines!) and draw with big gestures. I wave my arms around all the time, but especially when drawing, and when looking at artwork or textile designs, I wave my arms a lot so my body remembers the lines, shapes, the feel.  We wondered if there are ways I could reflect some of that in my weaving.  And perhaps even a way to reflect my weaving fussiness in my drawings, but then the fun will go out from drawing, so not important.

I also talked to Lloyd to get some advice on how I can "develop" my drawings, but like weaving it's all about practicing, isn't it?

I had a few errands to run, but I should have come home afterwards.  Or gone to the library.  My head is full of wahwah noise today and my head is exhausted.  I love talking to friends, but just walking around town, looking inside shops, what's in fashion, coveting books, all that does my head in.  I do it because, you know, humans are supposed to live in a "community" and the rest of the week I work at home, but I seem to get a lot more energy taken out of me if I roam around town aimlessly than what I get back. Pity there haven't been too many movies I want to see; it's all 3D vampires/action/animation nowadays, no docos, no art house films, at hours convenient to me.

Though I do love weaving them and can't stop thinking about them, my cotton pieces continues to be cursed.  (Other than Hannah's!) Following two "walking out" of two exhibitions in town in 2007, one went missing from a box of 12 between here and Handmade for Christchurch, though we have a sneaky suspicion it's somewhere in their office along with 500+ donated stuff and after they've sent everything else out, there'll be a lone pink piece. Another went missing between H4C and a PO box further north and the bidder is worried. H4C is doing everything they can on my behalf, but one cannot help but worry in these circumstances, especially because I know the bidder. And then what I won on H4C haven't arrived, and it's been three weeks since the bid closed.

I worry because unfortunately our Post Office puts things in the wrong PO box far more often than I care to remember.  Just this week they put Ben's camera part in someone else's box; this someone else rang me and offered to drop it off, but our house is difficult to find, so I asked him to drop it off at Ben's work, which is super easy to find.  Except I didn't explain to him why, and the part hasn't turned up, and Ben's upset, and if things can get any worse I didn't take the guy's contact, which I usually do because I usually let Ben handle it. Gosh, it hasn't been a good week in retrospect.  No wonder I'm grumpy, and none of these have been resolved.

On to pleasant topics: I'd like to share some recent discoveries. The first two, I found, via some detours, from H4C.

Felt appears to be a New Zealand Etsy, for want of a better description. My favorite is Dee's Tiny Eyes. I love her dolls but she has none in her store now as they are super popular; I think many are sold as soon as she posts photos on her blog, before they make it to her store.

I don't know how the two are related, but there appears to be an overlap in people involved in Felt and Extra Curricular, a tiny magazine purporting to be for "people doing exciting side projects in their spare time" but some of the featured artists look like they do what they do most of the time.  Nevertheless, a gem of a magazine, with lovely photographs, and you can get it from Felt, too.

The last find of the week, Handmade Home, was tucked away in my fav bookstore. I'm retrospectively connecting the dots here, but would I be right in saying Amanda's books and others in similar style influenced a whole lot of moms/mums around the world, because it has a similar feel to Felt, and with many items donated to H4C.  I was absolutely besotted with the book, and was saddened I can't go to Japan soon because Japanese bookshops have always overflowed with cute craft books.  But while I support independently-owned, (and lately any physical) bookshops, an US$21.95 book sold for NZ$59.99 when a straight forward conversion of currencies says NZ$26.51. I think they can't just moan about Amazon and ebooks, but need to make an effort to sell at prices resembling reasonable prices. So, pass.
Posted by Meg at 4/09/2011 11:34:00 AM