I'm still not sure where I'm going with these, but I no longer worry, and have been continuing my experiments. I'm talking about color blending, spinning and knitting.

I studied the yarns I've spun last and this winter; they are from the same source, and a selection of mostly same colors. Mid last week, I had these "yarns". 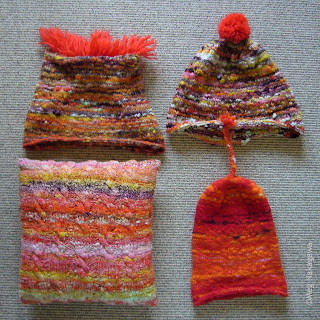 Yarns for the top two hats were spun last year as singles, and as I had to relearn to spin, I had great fun with the bumpy thick parts and thinner bits. I wanted the yarns to be mostly orange, with specks of other colors to make the oranges, (there are three,) come alive.

For the bottom left cushion cover, I also spun and plied last year; since I wanted to make 2-ply yarns, each yarn was spun thinner, though color scheme was arbitrary. I was running out of some oranges, so pink became more prominent.  I regret the cover was too narrow and had to be stretched over a navy blue cushion; if it had been wide enough, the cushion would have had a lighter appearance, without the "holes".

Bottom right, I knitted using singles I spun for specially for this project; it was supposed to be a gradation of red-oranges-yellow.  (The colors look pretty true in the above pic.)   Compared to the unintentional spinning of last year, however, the intention and the plans made the saturated colors boring, even though the yarn contains small flecks of purple, brown, lime and pink.  I wanted to go back to the more carefree spinning of last year, so I spun three more skeins. 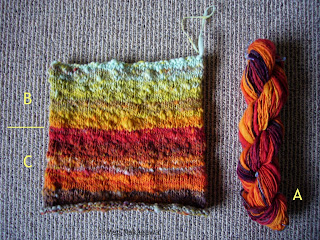 I spun A and B intending to use these to create a gradated hat.  I included quite a bit of spots in the darker parts of A and in most of B, and I thought I did well.  Then very randomly I blended and spun C.  While these skeins were drying, I could not help that not only C was more interesting than A, but it looked good next to B, so I knitted this hat on Saturday.  It's a little small for me, but I had my Dad measure my mother's head on Sunday, and I know this will be a warm and fluffy "rushing around the house" hat for her next winter. 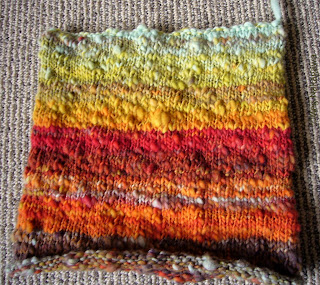 It's really my most favorite thing I've made in a long time, and my best knitting, not as regards to my spinning and knitting skills, but as a an aesthetically pleasing piece.  This picture above, on my monitor, doesn't show exactly true colors, but it has a feel of an Impressionist painting of a spring outdoor scene.

And here are some of the color details. 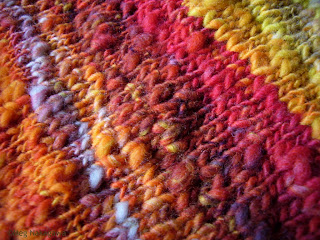 This section looks a little bluer, and the red is not as saturated as in real life, but I love when oranges are mixed with other colors so they become more sophisticated, but the liveliness of the hue still comes through.   The yellow/lime end looks pretty true. 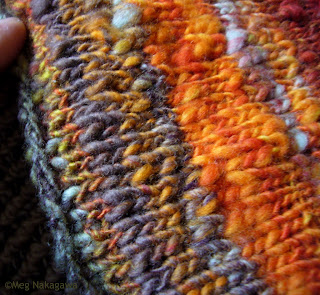 The brown sliver I have is, on its own, a boring light/mid blue brown, and is nothing to write home about.  But when blended with oranges/yellows, or even with purple or lime green, it becomes a lovely nuanced backdrop, against which the more saturated hues are allowed to stand out. 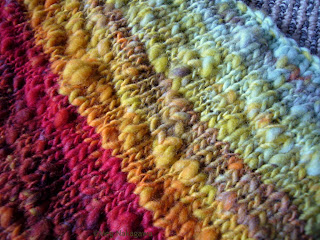 This photo is much too blue, but tinkering with it made things worse, so I'll just show you how much flecks I've included.

What have I been thinking?  Well:

1) I prefer complex color mixes over saturated, clear colors. I don't know if it's due to my getting older, the current season, or if I like these colors in this context, but perhaps not in another.   But for now, I agree with what Randy Darwall says; in short, the more the merrier.

2) I don't mind not being an expert spinner nor knitter, but I would like to be able to control my carding better.  After I knitted Mom's hat, I spun another skein Saturday night; this one was mostly brown, with small amounts of lime green, curry yellow, and the oranges, but in parts I blended the colors very well, in others I left streaks of colors.  Sorry, it's not a good view, but here it is. 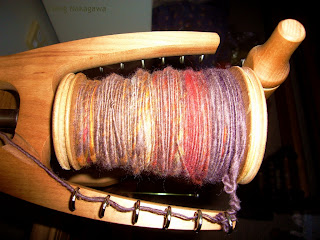 3) Carding/blending is one thing; I try my best to mix a good proportion of different hues/values to make a nice "fluff". But then when it's made into a yarn, the colors are twisted and lined up and simultaneous contrast kicks in, and the appearance and, of particular interest to me, the relationship between the hues/values change.  I'm extremely interested in the hues/values that "disappear"but add nuance to the stronger hues/values.  Such as my brown.  The situation is further complicated when the yarn is plied.

4) When planning a piece, whatever the scale and shape and complexity, the relationship between and the proportions of the hues/values are even more complicated.  There is also the change in the way light behaves with plying and interlacement.  I am able to understand how "colors" interact by sampling and observing, but I'm not sure if I am gaining knowledge I can actively use when planing or constructing a color relationship.  Plus, we need to consider not only the close-up but mid- and long-distance views for "real" pieces.  I think what I'm saying is, currently, planning color schemes is a hit-or-miss affair for me.

5) The ease and speed with which I can card/blend/spin/knit is a slippery slope it's quick, offering instant satisfaction.  This is a good thing for a hobby, but I can't transfer this process onto weaving as quickly.  And because I keep playing with these, I have woven only one half day in the last 16 days. Yet I remain a weaver, that is my primary interest.  So I hope these experiments are going to work towards my weaving more satisfactory color schemes in the future. Because right now, I'm not sure how it's helping.
Posted by Meg at 6/20/2011 05:25:00 PM