Pushing the Boundaries a Tad Too Far

I have no idea what I intended to do, except I felt compelled to weave a length of wool that could be stiffened to stand on its own when turned into a cylinder.  And considering how quickly I put it to practice, I must congratulate myself on my rare spontaneity.  Other than that, I have these two hideously ugly wool... things in 12+ colors. 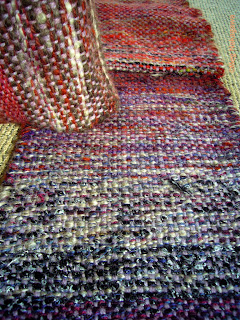 Thinking back, what I had in mind was a stiff wool tube, straight at the bottom, (which would have been the right selvedge) but jagged at the top like a mountain ridge line, (created by varying how far to the left each pick would travel,) standing on its own.  I had Grand Canyon in mind, but not exactly replicating the images.  Once I got started on my rigid heddle, (first time weaving on it since 1998-ish), I forgot about the jagged left side and concentrated on the color interaction.

I used around 12-15 balls of yarns, and some variegated, so there are a fair number of color combinations.  Because I wanted the cloth to almost felt in the wet finish, I included a lot of handspuns, but as I didn't have many in dark colors, I ended up mixing a fair amount of light naturals.  I discovered I don't like anywhere near an even distribution of values, but prefer in the first instance darker values with a little bit of intentional light spots, and in the second, mid-to-light values with darker values containing/governing the light, as in grids or strips.

What took me by surprise was how completely I hated this kind of unstructured weaving; so much so I felt sick by the time I cut off the first piece.  As regards weaving, I really do prefer the tightly controlled, structured environment where about the only thing I do spontaneously would be to decide on the warp/weft colors as I make warp/weave. I might have been happier cutting up paper or mixing paint.  At least I never expected a physical reaction.

With these pieces, I need to look closely at the colors, probably with L-shapes, because I know there are interesting bits in the mix.  While I wove, for example, I noticed how one particularly unattractive Azuki Bean brown changed hues in the company of purples as opposed to oranges, and that was around midnight last night, so in the daylight it would be a different story again.  As well, when these dry completely, (they just came out of the dryer,) the values may lighten up a bit.  I would still like to see if I can cut the edge on one side to create the mountain ridge line.