Passive Thinking, or Taking the Right Brain on a Walk

So, last week.  Monday was a holiday; Ben was sick at home Tuesday-Thursday; I was sick Thursday-Friday.  So we had the fire going almost all day almost all week as we slowed down, reading, watching movies, and and taking long naps.

Friday, when I had the house to myself, I lit the fire; I don't do this often when Ben's not home, but it was a gray, wet, sad day, and I needed a gentle nudging.  I also turned on all the lights in the living room, and turned off the radio.  Already it was quite a different atmosphere from my regular work day; it was almost like a retreat.

The first thing I wanted to do was to edit my photos. particularly the Grand Canyon, the way Judy did to get a more accurate/detailed look at the outline of rock formation (if you can call it that), but also the monsoon cloud and the Honeysuckle. But my head felt feverish and my eyes blurry and I didn't have the patience for the task.

So I thought I'd have a look at all versions of the three photographs I concocted up to then, and printed tiny, business card-sized copies of everything; vaguely I thought this may be a good way to transition to the sketchbook; my intention was to pick half a dozen and focus on them in the sketchbook.

Firstly, I discovered I had a lot of different high-contrast and/or black/white versions that gave me different outlines, especially of the clouds and the flower. 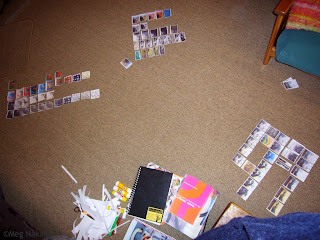 Secondly, being me, I had to sort them, categorize them, analyze them as groups, and physically place them by areas of interest.    This was an interesting exercise because for the first time I looked at the different versions of each photo collectively.  It was almost like having three flip-animation in front of me.  I also thought I'd done most with Grand Canyon, but in fact I had played with them in almost equal measures, but with Honeysuckle just a bit more.

Thirdly, I wanted to paste them on one sheet of paper, and I rummaged around and discovered the A4 size sketchbook I used for two design workshops by Alison Francis.  (I was particularly impressed with the prepping I did on the depressed mind before the second workshop; must revisit.) But having created "pretty" pages of logically organized pictures, I didn't feel like getting out my color pencils or the like, so I abandoned that.  I also studied the many pages in the sketchbook where I started color analysis of pictures/images I liked or found disquieting, incomplete, intending to return when I was in the mood.  Didn't feel like doing that, either. Then I grabbed most of my "current" notebooks and sketchbooks and looked at what else I abandoned.  Good grief, there were many pages and projects, and there are more "current" volumes.

Then I had lunch.  I was aware that all day I could not get out of my head hither-to my most adventurous thing I've done in the design process, the two yucky pieces of woven wool monstrosity hanging to dry only a couple of meters from me. (Sorry, the colors are not accurate as the afternoon got darker eventually I had to I had to use flash.) 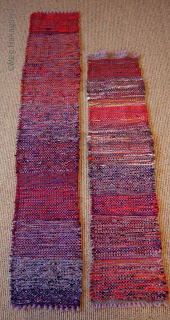 I folded it, rolled it, unrolled it, squished it, but there was no way it was going to stand on its own, but then I became less worried.  I knew there are ways I could prop it up.

What I did do was to fold the parts I didn't like and stitched it "shut" so you can see only the color combinations I like.  I particularly like the bottom half, the red-to-less-red-to-purple portion, but top part, with a lot of natural/white fiber showing, has another, cheerful expression.  (If this photo looks unnatural, it's because I've turned it upside down so you can compare it with the "before" shot above.) 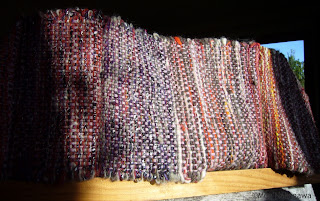 This afternoon, I just  propped it up using the pegs on my warping board as if I was planning to do so all along. Funny how some problems solve themselves.  (And the sun helps, too.) 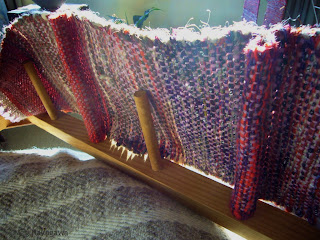 It's a little hard to explain in English, but I stuck two pegs up the "folded back and sewn" part.  The fabric looked totally different standing up, albeit not straight in spite of many minutes of team-pressing.  This is also the first time ever that I arrived somewhere where the thing already doesn't look at all like the point of origin in trying to design, and I must say, I am not displeased.  I have no idea where I am taking this, or whether I'm going to do anything with the other piece, but I'm glad I did it as I was able to bring to life something I saw in my mind's eye just a few days ago.

Anyway, I enjoyed the whole unrushed-ness of Friday as I picked up and dropped each task, guilt-and-result-free, and I realized I hadn't had unrushed work day in a very long time; I also appreciated how well I've been since the dark days of yore, the last of which was about a year ago now.  I have been far more productive this side of Christmas than I had been in a long time, and I feel joy when joyous things happen to me.

Towards the end of the day my mind was set on the Honeysuckle picture, because I liked the already-abstract quality of the original photo.  I felt I had a good, productive (in an unfamiliar way) day.