And then there is the small matter of where I am going with my P2P2 project.  I am surprised at the direction the project has taken, and amazed I'm willing to go with the flow.  I'm also noticed how long it takes for an observation to turn into an understanding.

After I took the Sample-Stuck-on-Warping-Mill shot, I took it off the warping mill,  (because I couldn't have a warping mill perched on a love seat in the middle of the living room,) and stuck it on two warping pegs.

First, I threaded knitting needles in the back and spread the piece.  Even as I used extra cooking chopsticks and bamboo skewers, it wouldn't spread out properly, and I kept imagining a small angry Australian frilled lizard, (not linking to images, as they can look vicious,) screaming at me.  Not a nice thought.

Then, as I needed the knitting needles, I took them out.  Wrapped around the pegs, and threaded at the back with a needle, it looks like this: 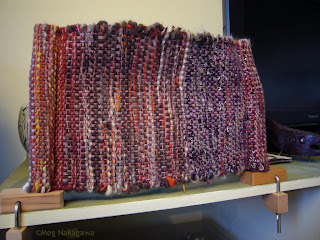 Though I can't see half of the sample, I like the thickness of the form, and the knowledge that there are other colors in the back I can't see. And the fabric not standing up taut is just as interesting as it standing up straight and taut in this case.    Seen from the top, the fabric is folded like this and threaded at the back:

The shape above, or even below, can be constructed on the loom, if I don't mind sacrificing the complexity of the weave structure.

I can see myself making this in a bigger scale, (or smaller. or right about this size). What I've been imagining is something structurally complex but relatively straightforward color-wise, (e.g. purple with specks at one end, moving to red, orange, and blue-yellow with specks at the other,) woven as wide as I can on the loom, (around 80cm), flipped sideways and sewn into a loop. If, for e.g. I can get 120cm dowels, I can lift the fabric 40cm off the floor, and the top of the piece will come up to 120cm. The length on loom, i.e. the width of the standing piece, can be as long or short as I like.

I've been thinking about the vertical vs horizontal views of cloth.  For one thing, all of Amanda's photos present to me vertical more than horizontal interest.  Most obvious is the Grand Canyon and the kitty, but the park, the people and the vehicle, and the monsoon cloud are all images I consider to exist vertically, i.e. more like a wall than a floor.  They may not be entirely flat nor stand at 90 degrees, but if I were to jump into the photos, I don't imagine being on a higher plane looking down, but standing up and looking straight ahead.  Even the honeysuckle is shot from an angle, thus giving the depth of field that makes the photo interesting.  (In contrast, imagine if the kitty was looking straight up at Amanda; then, I might consider the photo to be of horizontal interest.)

The experiment above has been completely spontaneous.  I had no plans nor vision, but along the way I'm finding things I like more than others, and seeing the different arrangements of the samples trigger me to want to see it arranged yet another way.

As well, seeing how Ronette arranged the other sample piece reminded me I used to hate scarves and shawls being shown flat on a surface, or against a wall, and I went to great length scrunching things up or tying so the pieces weren't flat.  In the last little while, however, I have been much too caught up in the construction of the cloth and forgot about the verticality and the non-flatness of a cloth in use. This has been a good reminder.

I am surprised the visual clues I received have brought me quite a way off the main road, but I expect I want to explore this little side road a little while longer.

The only hump I see in the distance is, I still want to remain a cloth weaver, not an arty thing-maker.  Part of me sees nothing wrong in working in both areas; part of me wants to stay doggedly loyal to cloth weaving.
Posted by Meg at 6/20/2011 07:55:00 PM