The Group and a Conundrum / Spinning, Knitting and Colors / Garden

As I mentioned in the previous post, The Group met for the second time last Monday.  We spent an awfully long time discussing the group name, all of us aware it wasn't just the name under consideration, but fine-tuning what we wanted to do as a group and as individuals, and testing the group dynamics.  We couldn't decide on our name, but I think we all felt a lovely sensation of being in an encouraging, sharing, and creative environment.  We disagreed on a few things, and lo and behold, we came out happier at the other end of discussing our disagreements; I've never been in an environment like this.  For the first time that I could remember, I could voice my disagreements without feeling I wasn't playing nicely.  This was very liberating.

One of the things we discussed at some length was the diversity of interpretation and reaction to words: some words that brought surprising reactions were: sisterhood, boundary, and marks.

Private galleries in Nelson are closing down or being sold left and right, limiting the options for prospective group exhibition venues.  In fact, Refinery is the only one we could quite easily sign up for at the moment, but they are pretty much booked until the end of 2012, except an iffy two weeks here and a definitely one week there.  (From memory, they used to allow bookings in three-week blocks, but they're not doing this any more.) Ergo my little conundrum, whether to give my slot to the group.  And even though I've been working on WYSIWYG for 15 months now, I've really no preference or prejudices about going solo or group.  None.  What so ever.  As far as I'm concerned, for now, I can go either way and really enjoy the process and have a pretty descent exhibition.  Isn't this... novel?  Though I almost wished I had an inclination one way or another.

I have been weaving the hard slog, I mean, hearts, blanket; I have enough warp left to weave a narrow but long-enough blanket for a single bed, so I might as well go for it.

For my own entertainment, I've been spinning and knitting. This last project was supposed to be a funny warm hat for my mother, but I think it's too small even for her small head, and it's not thick and warm in the way I envisioned. 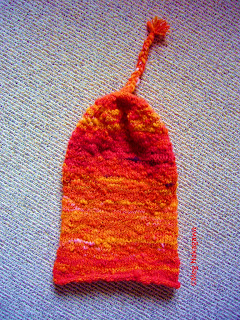 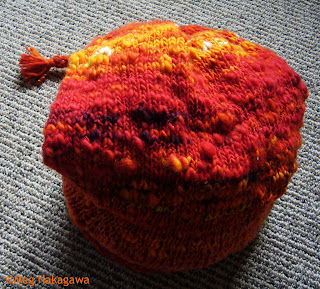 (This hat is much redder than either pictures: I several versions but my eyes aren't cooperating this morning, and neither portray the autumnal, harvest feel of this hat. The darkest red part is closer to cherry red. )

This is the first time I spun with a smidgen of design in mind; it was to be in gradation with the lightest oranges in the middle, but when I made the balls I wound them so the red bits needed to be knitted first on both balls, instead of them coming at the top and the bottom of the hat.

I'd like to learn to card better, and looking at two video clips which Dot recommended, I have an idea of how to improve this.  I don't mind my yarn being inconsistent in width, in fact I love knitting with extremely slubby yarns, but because I have very little control, I've been creating more threads than yarns, and because I only have one set of knitting needles with which I can knit a circle, these threads are woefully inadequate.

The biggest reason for my lack of control is my speed.  I realized when I spin, I try to treadle/pedal as fast as I can; it's as if another, more athletic part of me takes over, and it's a completely different part of me than the one trying to spin with a hint of design in mind. I've tried slowing down my foot/leg, and being unsuccessful, I tried readjusting the various knobs to slow things down, but I haven't been able to decide what is the correct speed.

I have considered taking a correspondence course on spinning through our national guild; I thought of the course a couple of times in the decade but it was never high on my list.  I'm brought back the idea to the back of the back burner, again, because I would like to be a better spinner, but by better spinner, I don't know what I mean and I don't know what kind of a yarn makes me happy.  I suspect, though, spinning could potentially introduce another "style' in my weaving repertoire - texture.

But then there is my tendency to turn everything fun into difficult tasks when I want to be better at it.  Drawing is so far the only thing in my life I feel comfortable just doing, and never worrying if I'm good or if I've improved.  For now, spinning (and knitting) has been great fun, and because of the speed of my treadling, at time it's almost thrilling just trying to keep up with the speed without loosing the end of the yarn.  I'll keep the spinning course at the back of the back burner for now and attempting more crazy spinning.  Ditto with the knitting; no gauge, no measuring, no sampling.

(Now, close your eyes and imagine a Punch or The New Yorker style cartoon of a little old lady whose leg is treading so quickly she's trying to keep up spinning at ultra high speed!  She cannot but spin in orange, do you agree?)

I was surprised I carded, spun and knitted the latest hat in three or four days. My group members thought I was underestimating their work when I mentioned, (apparently, once again,) how slow weaving is.  But in my case, weaving does seem to be the slowest thing I do.

Oh, the things you achieve while watching the telly in the evenings! I think I need my Rigid Heddle to live in the living room. But next, I think I'll try a slightly more intentionally-designed hat for Mom.

So far, I've only ever knitted orange things, and the next hat will be in large part orange again.  But I am spinning some mostly white stuff, too; these yarns may finally go into my weaving, fingers crossed.

I've been gardening quite a bit, mostly weeding and trimming, but before each rain, I've also been taking things out of pots and putting them into the ground.  The place still looks pretty shabby, but I now have pockets of tidied areas. And mounds of weed pulled but not cleared everywhere. I have a system, but my body defies system and logic some days, and I'm allowing even this, because some work is always better than none.
Posted by Meg at 6/06/2011 01:44:00 PM