Between April 30 and May 8, every alternate day I had occasions to meet and speak with Humans-Other-Than-Ben; that's five in a row of some great and some not so encounters, plus four bad-news emails. I wished I could ignore the bad and the petty but in the mindset I was they turned into multiple conversations in my head, with the bad news circulating far louder and annoyingly more often. I felt like a duck whose back absorbs all water except the good news, feeling fatter, heavier, wetter and wobblier. In one case the conversation was so petty I walked around the house shouting, "I left high school in 1977!". Not worth repeating.

Buchaknow, at times like these, all the memories of teachers who disliked me, the friends who excluded me, the scoldings, the (perceived) slights came back like a bad animation, and I felt I was a terrible person. Funny how good news and compliments really do roll off my back. And thank goodness I had the presence of mind not to cancel spending time with good friends, too; their presence and words got me out of the rut, and reassures me there's nothing wrong in choosing friends wisely.

I was/am going through a Keanu Reeves binge on the DVD-hire/rental front and saw Thumbsucker one day. I didn't like the film much but the interview between the novel writer Walter Kirn and director Milke Mills was fascinating I watched it two and a half times, and I listened to a bunch of Walter Kirn interviews. I was so relieved to discover there were other chronological-grown-ups who (im)patiently waited to become the adult person s/he felt s/he was meant to be.

Meanwhile, I finished one cashmere scarf which was half woven and left neglected for months; it's the first piece in the last Log Cabin warp, I think, but the two navy warps are so close in color, size and texture I can't tell the difference. I just remember using two "different" cones, and I rarely have two cones of the same yarns of cashmere. I'm thinking of rethreading it in an undulated twill or some such and joy-weaving the next four.

I put the purple warp (second photo, middle) on the big loom; I don't know what exactly I'll do but I'm thinking of swirly network twill of some description. I've seen enough of them and don't feel excited by them at the moment, but looking at what's available at the Suter Gallery shop, I thought they would look different from anything else, (my other stuff included,) so I think I'm on the right track.

Ben had a week off but it rained the whole week so we splurged on plants, hoping to do something about our place, again, this winter. Right on queue, Monday was a lovely still day and I gardened a couple of hours, followed by another hour and a half on Tuesday. I felt a wee ting on left wrist on Monday, but by Tuesday lunchtime the tings had spread to both wrists and elbows. I didn't garden Wednesday or Thursday but made the mistake of reading blogs on Thursday and made it worse by not using the mouse but fiddling with the tiny touch pad. I couldn't think of anything interesting I could do at home, so yesterday I went into town to run errands and saw two movies, but the familiar dry, white feeling on my muscles are definitely bad. Darn. (She types as she confesses.) 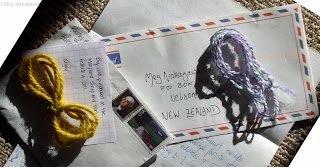 In the mail today were rug wool purchased at the Maryland Sheep and Wool Fest 2011 from Rachel Beckman in my kind of dirty yellow, (bliss!) and handspun by Dot, silk with merino dyed in Australia. The first house we rented in New Zealand was on Waratah Street in Auckland, an Australian plant the yarn source is named after; I like this kind of coincidences. Thank you very much, both.
Posted by Meg at 5/19/2012 06:01:00 PM