Samples: I tried scanning rather than photographing. Hope it works for you. 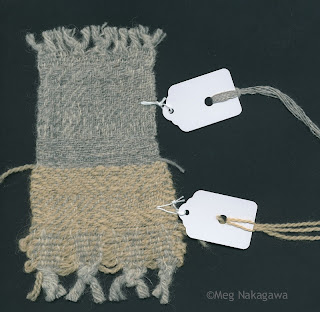 First sample: the top shows warp and weft yarns as I intended. LOVE the result, but it'd be slow weaving; the bottom part, I grabbed a leftover which looked more like the size I should use; love the result but I only have about 10 meters of it and have no idea where it came from; it's another one of those I had for ever. 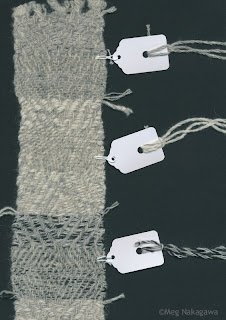 Sample 2, top part: trying out different wefts in grays, blacks and undyed, yarns of which I have sufficient amounts; disliked blacks immediately and irrationally; realized once again I don't have too much fat yarns so have started twining what I've got. 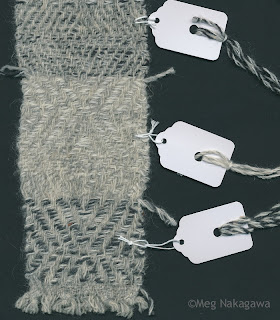 Sample 2, bottom: started also combining mohair for texture. As long as structurally safe, I should go for big floats so the design can be seen from some distance. 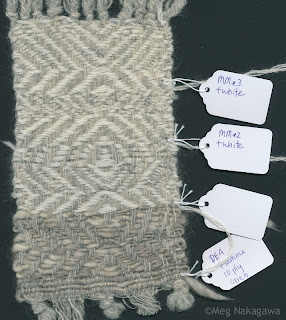 Sample 3: calculated my intended warp and weft yarns aren't enough for either purpose so decided to combine and used them both in the warp, and thus inserted in the sample warp. Experimenting with mixing mohair in the weft for luster but not really liking it because mine is a mohair/merino mix that doesn't shrink so if I ply this with yarns that shrink, my pillars will be hopelessly wrinkled!  The bottom portion uses a fat, uneven but with-scale wool available from DEA Yarns. I rejected this because it's dark and has too much brown and they discontinued the lovely pale gray mix, and the design will come out warped, (which could be interesting, but in the first instance, so not to my taste,) but may reconsider. (See Arrangement below.) I also wanted to "do" the October exhibition without buying any more new yarns; this weft won't be cheap for something I can't wear or give away easily, which makes me reluctant to invest $. 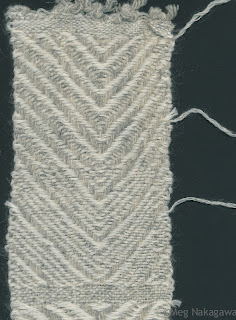 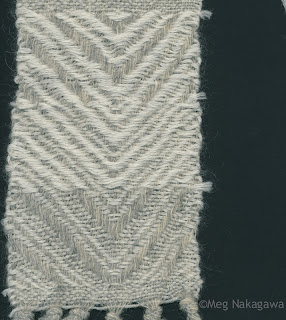 Sample 4, bottom part: ditto, and pretty much settled on two-part merino/mohair mix and one part unknown stiff undyed wool; in this combination the two parts of the mohair mix insists the weft not shrink, so if I can make the cloth satisfactorily flat in further sampling, I have plenty of these yarns. Further experimentation to be conducted on the big loom in the real width.

Arrangement: I never thought of putting these pillars in anything but a straight line, more or less parallel to one of the walls; in fact I was ever so pleased with myself when I realized I could put them in a straight line not parallel to the walls just recently. Lloyd suggested considering a circle (or a pentagon), while Ben suggested an arc, and both are do-able; both would make clearer which side is A-side vs which is B of the cloth, if there is to be such a distinction. Lloyd also suggested considering putting real stones/rocks under the pieces, and the easiest-to-handle and cheapest was the bits that come off of sculptures in Oamaru Stone. Luckily we have a mutual friend who works with these and I could probably ask her to save her offcuts (??)m but then my problem then is, for the most part Oamaru Stones come in creamy whites whereas I'd had hoped to go with almost hue-less grays and whites. The gray/brown weft in Sample 3 would create easier visual link. Or, I could arrange the Oamaru Stones and then spray them white! So now I need to investigate real stones!

Issue: I've proceeded with my plans so that I can weave it relatively quickly. And not in 20/2 cottons which I had in mind until I started to put numbers to my pictures. I like fine weaving and I'd like to imagine that's my thing, but I've been wondering what kind of an image I want to project about me through this project, or more truthfully, how I will see myself when I see these monsters hung and lit. Do I want to show/see I can do bold, or continue with fine/fussy but enlarge the scale? I keep picturing variations of the latter as they bring me pleasure while I continue to convince myself "bold" is worth sampling; no harm in being able to do bold and fussy.

Shortly after I finished the fourth sample, I learned The Flight exhibition was to open in 11 days so stopped work as if there was something similar, I still had time to change my plans. (Nelson is a small place and the number of textile afficionados limited, so I didn't want anything of mine resembling anything in their exhibition.) But there was nothing like gray, pillar-like or earth-quake/financial-crisis/Greece-inspired (??) work so I can proceed as planned. I'm still am baffled there will be four, four!, textile exhibitions at the Refinery in a twelve-month period!

My perpetual question remains: how far into "art" do I want to venture vs how much "cloth without concepts" do I want to hold on to. And the more I kick this question around, the more I feel it's inevitable this should be my final blog post (or whatever the equivalent,) which I'll be posting the day I hang up my shuttles, turn off the light and quit weaving. There doesn't seem to be much point in having a "premise" just now and binding myself to it when there is a world of possibilities out there. And I still have a few decades left, (she says hopefully), of weaving.

And I can't believe my mind/viewpoint has changed so completely without me noticing. But then Shania warned us a decade ago, didn't she? Better get off the computer before my arms fall off, but I promise the next post I'm planning is a light read.
Posted by Meg at 5/19/2012 11:03:00 PM