I've been frugal of late, you know, relative to the way I've been for a few years, and so much so compared to how I was longer ago. But I thought I'd show you some recent acquisitions because the nice thing about frugality is, I appreciate more what I do get, which is a lovely, satisfying feeling. 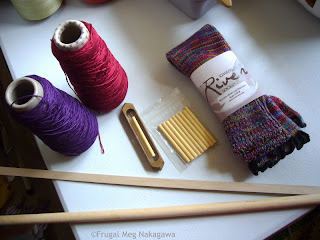 Two two cones are 4-ply cottons I got from DEA at the Festival; they are thicker versions of my fav 20/2s with some of the same colors. I've wanted to sample these every since they came out.

The leg/arm warmer is from DEA as well; Kylie, Deanna's helper at the Festival, had a pair of black ones on her arms and extolled the virtues of these, in particular over fingerless gloves. I haven't decided if I'll keep them or send them to Mom, who complains her upper arms get cold, but they are cheerful and soft and warm!

The tiny Japanese bamboo bobbins were gifts from lovely Sampling. And as they come from the same outlet as my tiny bobbins, they fit; the size of the holes are good in about 2/3 of them, a smidgen too small in the rest, but that would be easy to fix. Sampling tells me they come in a bag of 100; something to keep in my mind.

And lastly, I found the Saori Tie Rod at Kaz's and thought it would be great to try particularly with cashmere warps on my four-shaft loom to eliminate as much waste as possible.

The idea is so simple and straight forward; you clip the warps inside a groove in the the dowel and hold them down the flat stick which fits into the grove and bands, at the start of the warp/project. Years ago, I tried a similar idea by winding the warp around one dowel and holding them down with another dowel and many, many rubber bands, but warps started slipping and it didn't work.; I intended to try the same idea with flat stick next, but never did.

I should be careful with the tension when I try this because sometimes, especially on the Big Loom and with cottons, I weave under high tension to the point I have snapped flat sticks and pine dowels at the back of the loom and bent and destroyed a brand-new, hollow, stainless steel dowel.